Retired Champaign principal has a new way to promote schools 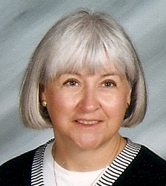 Photo Caption: Rose Costello, former teacher and principal at Holy Cross School in Champaign, is the first regional coordinator of Catholic education for the Champaign Vicariate of the Diocese of Peoria.

CHAMPAIGN — She retired as principal at Holy Cross School in May, but no one really believed Rose Costello would sit still for long.

Costello has brought her 41 years of experience as a teacher and principal in Catholic schools to a new position — regional coordinator of Catholic education for the Champaign Vicariate of the Diocese of Peoria. Ryan Bustle, principal at The High School of Saint Thomas More (STM), made the announcement in July.

“Rose will be responsible for coordinating collaboration between our high school and area Catholic schools for certain events and projects,” he told The Catholic Post. Bustle added that she would “play a role in enhancing the visibility of Catholic education in our area, recruit new families and students to STM, and raise funds to support programs provided by area Catholic schools.”

“We understand we can’t do things the same way as in the past,” he explained. “We can’t just sit back and hope we have a good-sized incoming freshmen class. We wanted to be proactive and send someone out into our community to be a voice not just for Saint Thomas More but for all Catholic schools.”

Costello is just the “voice” they need, according to Bustle.

She taught for four years in Danville at the former St. Patrick School and then began her 37 years of service at Holy Cross School. She taught fifth through eighth grade for 23 years and was the assistant principal for one year before moving into administration in 1999.

Costello was honored as the Diocese of Peoria’s Distinguished Principal for the 2010-11 school year.

“I think Rose is perfectly suited to this position,” said Dr. Sharon Weiss, superintendent of Catholic schools for the Diocese of Peoria. “She has the passion and she has the love for Catholic education. When Rose says she’s going to make something happen, she does.”

Weiss added that Costello is “on fire” about this new opportunity. “She’s got a lot of energy.”

Saint Thomas More draws students from Holy Cross and St. Matthew in Champaign, St. Thomas in Philo and St. Malachy in Rantoul, as well as the community at large. Bustle said STM officials hope to involve people in events outside the school building rather than relying on traditional open houses alone.

They will be looking at ways to increase funding for tuition or create new funding, he said.