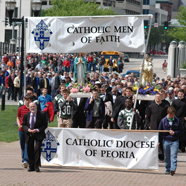 Photo Caption: About 700 men from throughout the Diocese of Peoria and beyond walk through downtown Peoria on May 11 during the 2013 “A Call to Catholic Men of Faith.”

Catholic men were urged to be “bold and fearless believers who put God first in their lives” by Bishop Daniel R. Jenky, CSC, at the tenth annual “A Call to Catholic Men of Faith” events in Peoria on May 11.

During a Mass at St. Mary’s Cathedral that followed a prayerful walk through downtown Peoria, Bishop Jenky especially challenged the 700 participants to “love and protect God’s least little defenseless ones.”

Moments earlier in his homily, the bishop had decried the “murderous abortion industry” that has been exposed anew by the trial of Dr. Kermit Gosnell, the Philadelphia physician who was found guilty May 13 on three counts of first-degree murder in the deaths of three babies born alive.

“Nothing can ultimately defeat men who belong to Almighty God. Not the world, the flesh, and the devil,” said the bishop in listing challenges he said should not intimidate those who pray in the “invincible power” of Jesus’ name. The list included proponents of radical secularism, current government threats to religious freedom, and an entertainment industry that “sacrilegiously ridicules the holiest things of our religion.”

“Not an American president,” continued Bishop Jenky, “who lavishly praises Planned Parenthood, the largest provider of abortion in America, that for financial gain shamelessly promotes the destruction of innocent life in the womb. Not the entire murderous abortion industry that kills babies even in the process of being born, and has now been publicly exposed as even killing babies after they have been born.”

The first reference was to Obama’s April 16 address to the Planned Parenthood National Conference in Washington, D.C. Chastising state and federal legislators who want to end federal funding for Planned Parenthood or place restrictions on abortion, Obama told the organization that “you’ve got a president who’s going to be right here with you, fighting every step of the way.”

Bishop Jenky warned “apostate Catholics” who cooperate with the intrinsic evil of abortion that “by their support for the works of death, (they) forswear everlasting life.”

“BE FATHERS WHO FATHER”
Earlier in the morning, the men had gathered on Peoria’s downtown riverfront as they have annually since 2004 in a public support of Catholic faith, family, and the priesthood.

“Too often our culture mocks our faith, and we stand silent,” said Craig Dyke, director of the diocesan Office of Evangelization and Family Life, in opening remarks to the crowd. “Today is not that day,” he added, calling on them to boldly stand for the faith and to joyfully evangelize in word and deed.

“We are Catholic. We have a voice that needs to be heard,” said Dyke, who used a megaphone to lead the men in the rosary as they walked the nearly mile-long route from the riverfront to the cathedral.

The morning’s featured speaker, Father Adam Stimpson, repeatedly challenged the men to be “fathers who father,” emphasizing the title as a verb.

Noting the march is under the patronage of St. Joseph the Worker, Father Stimpson offered three qualities of St. Joseph for the men to emulate: Be men of prayer, be providers and protectors, and pass on their skills and talents to others.

“Today, our responsibility goes beyond our domestic church,” said Father Stimpson, who is chaplain at Peoria Notre Dame High School and parochial vicar at St. Jude’s Parish, Peoria. “How many are spiritual orphans, with no one teach them how to pray?” he asked.

Father Stimpson praised the examples set by his own father, Dave — “I am the man I am and the priest I am because of my Dad,” he said — as well as his boyhood pastor, the late Father George Schroeder of St. Mary’s Parish, Rock Island.

“We do not become fathers who father by accident,” said Father Stimpson. “It’s with purpose. To be a man who serves — that is Christ, through and through.”

GRATEFUL PARTICIPANTS
Many of the men were accompanied by their sons or grandsons. Some were in wheelchairs, and a few little ones were perched on the shoulders of adults.

“I want to get them all here someday,” said Lee, a member of St. Catherine’s Parish who also has four daughters.

Father J. M. Logan, parochial vicar at St. Pius X Parish in Rock Island and chaplain of the annual event, led participants in prayers to St. Joseph. Asking fathers with children present to mark them with a sign of the cross, he invoked a special blessing.

Eric Frisch, a senior at Illinois Wesleyan University in Bloomington, said that as a college student he was grateful to be at such a large gathering of Catholic men and to “hear what it means to be a man of God.”

After the Mass, Jeff Zwadlo and his son John toured the cathedral, now quiet after the joyous celebration.

“One of my favorite things about this Mass is hearing all the men’s voices,” said Zwadlo, a member of Historic St. Patrick’s Parish in Bloomington. “It’s amazing to hear the whole cathedral filled that sound ? the tenor and the bass.”

Students from Peoria Notre Dame High School — which just opened the 150th anniversary of Catholic education in the Peoria area — carried the banners at the front of the march and also a statue of the Blessed Mother. Some students wore their football jerseys. A statue of St. Joseph was carried by diocesan seminarians. The sacrament of reconciliation was offered before the rally, with several priests hearing confessions at picnic tables along the Illinois River.

All in attendance received a medallion commemorating the Year of Faith. The medallions were blessed by Bishop Jenky at the end of the Mass.

“A Call to Catholic Men of Faith” has been a yearly event since 2004. It began as a grassroots response to a homily the previous summer at an Irish festival on the riverfront at which Bishop Jenky declared that modern culture was at war with Jesus Christ” and urged Catholics to “rise up and stand with our God.”

Bishop Jenky has often used the event to seek prayer and action on current battles in that “war.” Last year, for example, he made headlines when he invoked the names and practices of past governments that have “tried to force Christians to huddle and hide only within the confines of their churches” and, in bold terms, warned President Obama not to follow that path.

His homily this year was primarily a reflection on the meaning of the various names of God in the Bible, especially the power of prayer in Jesus’ name.

“In the name of Jesus we set out to win the whole world for God and for the unerring truth of the Gospel,” said Bishop Jenky. “We determine to witness to the faith, in season and out of season, whether the powers of this world like it or not.”

Bishop Jenky urged the men to share their faith “with your children, and your children’s children, with your neighbors and your friends, and even with everyone you meet.” He asked them to pray with their families and to bless their children as they leave or enter the home.