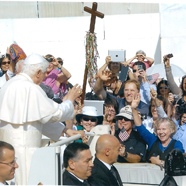 EDITOR’S NOTE: As Pope Benedict XVI neared the end of his pontificate, we asked readers of The Catholic Post for their experiences of seeing the Holy Father. Here are some of your responses.

AN AUDIENCE, A MOVIE, AND A GREETING FROM THE POPE

This past October, my husband and I were blessed to travel to Rome. While there we attended a general audience in St. Peter’s Square with Pope Benedict and were seated in the first row up on the pope’s dias. We were given this special privilege as we were celebrating our 46th wedding anniversary.

Pope Benedict spoke to the crowd in many languages about the Year of Faith. The crowd was filled with excitement and we were struck by the pope’s warm acknowledgement of those gathered in St. Peter’s Square.

The next evening we were further blessed by an invitation to a Papal Concert “Arte E Fede.” This event was held in the indoor auditorium at St. Peter’s and was an hour-long movie about the Vatican Museum art and its influence on faith. The pope entered down the center aisle on the red carpet where he took his place in a large white chair to view the movie. My husband and I kept asking ourselves if this was truly happening to us — viewing a movie with the pope!

After the movie ended, the pope made his way up the aisle, stopping to greet the people. All were cheering and clapping and voices were yelling, “Papa . . . Papa.” As he approached us, I held out my hand and he stopped, looked into my eyes, smiled and shook my hand. Words cannot describe the sense of peace that I felt when our eyes met. Not knowing what to say, I said, “God bless you” and he nodded and moved on.

We were impressed by the pope’s stamina during both events and sensed that he was serving others by his physical presence even though he appeared tired and frail. His humility and spirituality was so evident to all. Both my husband and I noted that his voice brought a sense of peace to us.

We are so very blessed that we experienced meeting the pope a few months ago. We were shocked by his retirement announcement, but feel that his message is that he is accepting God’s will for him. As Bishop Jenky has said, “Accepting God’s will brings peace.” Pope Benedict, may you feel God’s love and that of his people surrounding you and may you feel the peace which surpasses all understanding. God bless you.

“MEMORY OF A LIFETIME” AND “A HIGH POINT IN MY CAREER”

Upon hearing the surprising news of the resignation of Pope Benedict XVI, my first reaction after the initial shock was a wonderful memory of my visit to Italy several years ago.

It was back in April of 2007 that I made a 10-day trip to Italy, the last four days of which were spent in Rome. I was especially excited to be in the Eternal City at this particular time, as it was not only Pope Benedict’s 80th birthday, but also his second anniversary as pope.

The exciting honor of having a scheduled audience with the pope was such a high point in my career as a Benedictine monk that I even remember that our meeting fell on a Wednesday. Amazingly, during our audience, Pope Benedict was presented with a beautiful cake in the shape of Vatican City with St. Peter’s Basilica to celebrate his birthday and anniversary. What a wonderful memory for me to have been there at that special time to witness this celebration.

My parents (Bill and Carolyn Kraft of Peoria) and I went to Rome and the Vatican during May 2006, and attended Mass in the Square thanks to tickets received through the Diocese of Peoria.
While I will always remember the Bavarian musicians who played before the Mass, and the multitude of languages spoken by Pope Benedict, what I will always treasure was the reverence displayed by religious persons (sisters, brothers, priests) also in attendance. Their awe and wonder is forever inspiring to me.

BLESSED DURING PREGNANCY, OUR SON IS NAMED PAUL BENEDICT

I had the great privilege to start and end the year 2008 celebrating with Pope Benedict XVI as I traveled to Rome two years in a row as a chaperone with the LifeTeen group at Epiphany Catholic Church in Normal.

At New Year’s Day Mass in 2009, I was pregnant with my first child. Knowing popes have a tendency to stop and give a blessing to babies as they proceed up and down the aisle before and after Mass, my husband sent me along with an enlarged ultrasound picture in hopes of receiving a personal papal blessing. Well, I suppose one never can know for sure, but the teens who were with me and I insist we at least made eye contact with Pope Benedict XVI.

Celebrating Mass with and being just a divider away from the pope is completely exciting. Pope Benedict XVI, as a very orthodox leader, also has encouraged me in my faith journey as I’ve learned more about the teachings of the church and grown as a Catholic.

Oh, and that baby born in April 2009? His name is Paul Benedict, his middle name in honor of his experience with Pope Benedict VXI.