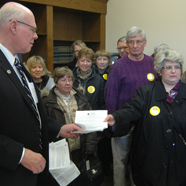 Photo Caption: State Rep. David Leitch (R-73rd) accepts a letter from Pamela Brink of St. Jude’s Parish, Peoria, asking him to vote no on legislation that would redefine marriage.

SPRINGFIELD — As Illinois lawmakers prepared to vote on legislation that would change the definition of marriage from “between a man and a woman” to “between two persons,” they were visited Feb. 20 by thousands of citizens opposing the change.

“It’s vital for families and for our country not to be going down this path,” said Randy Brink of St. Jude’s Parish, Peoria, as he wrote a note explaining his views in the office of Illinois House Republican leader Tom Cross.

Brink was among 90 participants in a “Defend Marriage” lobby day who rode two buses sponsored by the Diocese of Peoria to Springfield to speak with representatives at the State Capitol. There they joined a crowd estimated at 3,500 opponents to the legislation from across the state.

“At times we can feel like we’re alone,” said Craig Dyke, director of the diocesan Office of Evangelization and Family Life, who helped coordinate the bus trip. “Here we see we’re not alone. There are a lot of us who believe in the sanctity and dignity of marriage — the love between one woman and one man that is geared toward bringing children into the world.”

Senate Bill 10 to redefine marriage — which has already passed the Senate — advanced out of the House Executive Committee by a 6-5 vote on Tuesday night, Feb. 26. It will now go to the House floor for a vote. If it passes the House, Gov. Pat Quinn has said he would sign it into law, effectively making Illinois the 10th state to legalize same-sex marriage.

Many of those taking part in the Feb. 20 lobby day traveled far, prayed much, and waited in long lines to voice their opposition. The event was coordinated by the Illinois Family Institute and supported by the Catholic Conference of Illinois.

“I am so glad I attended the event,” said Georgia Kelm of Leland, a member of St. Teresa’s Parish in Earlville. She drove to Springfield with friends from the town of Sandwich, praying the rosary along the way.

At the Capitol, they spoke with State Rep. Tom Demmer (R-90th), who informed them he would vote against the bill, as well as three other representatives.

Meanwhile, the office of State Rep. David Leitch (R-73rd) was filled with visitors from the Diocese of Peoria trip. Some expressed concerns about “unintended consequences” of the legislation, especially in the areas of religious freedom. Leitch, too, assured them he would oppose the bill, though he said there is growing support for same-sex marriage.

Among those in Springfield were eight students and three staff members of Peoria Notre Dame High School. Charlie Roy, principal, told The Catholic Post it was a “positive experience” as the students had a chance to see how lobbying works.

A PRAYERFUL START
Those riding the diocese-sponsored buses began the morning with a Mass celebrated by Bishop Daniel R. Jenky, CSC, at the Spalding Pastoral Center in Peoria.

“I’m very proud of you,” he told the group before giving them a special blessing for their journey.

He urged them to remember that, while “God’s timetable is sometimes different from ours,” we follow a victorious, risen Lord.

“Let us try to do what God asks us to do and trust in God’s power, not our own,” said Bishop Jenky. The bishop has warned that the redefinition of marriage under the proposed legislation would result in “detrimental repercussions to traditional marriage, religious liberty, parental rights and society as a whole.”

“As Christians, we know that the institution of marriage was created by God Himself, and that He alone defines its nature,” he wrote in a letter last month to all Catholics in the diocese.

“It reinforced my faith that people do care about Jesus’ sacraments and their divine nature,” said Father Sabel. “I hope our lobbying effort, through prayer and the Holy Spirit, will change the hearts of our government leaders.”