Full text of homily at funeral Mass for Father Malinowski 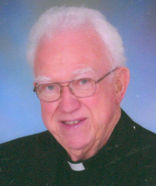 Editor’s note: Following is the full text of the homily at the Dec. 7 funeral Mass for Father Stanley Malinowski. The funeral was at St. Elizabeth of Hungary Church in Thomasboro, and the homilist was Father Ted Pracz, pastor of Holy Family Parish in Danville.

The words Jesus commits to our hearing and living were not spoken at an opportune moment of his ministry. Any other time would have been of greater profit to him, as when he fed people with the loaves and fishes, when he raised their dead, and cured their disease. These were moments he was impressive, appreciated and would have been rewarded with popular acclaim. It was when folks wanted to carry him off, offer him comfort, and a crown of gold and jewels on his head.

But Jesus chose instead a cross, and a crown of thorns. He was about to die.

When you are confronted by hate and by a strategy to eliminate you, what do you do? You overcome the hate with forgiveness and love. You “love those who persecute you.” You offer your life and demonstrate that no greater love exists than the gift of one’s life for another — whether you are accepted or rejected. Then you look your followers in the eye, you assure them that this is the code of discipleship: unconditional love in all seasons in imitation of the Master who loves you. You overcome evil with love.

Yes, Jesus left us these words because the object of his love — we — mean more to him than any pain, humiliation and cross he would endure. We are dearer to him than his very life. If we love one another, others will know that we are his disciples.

Father Stanley Malinowski learned the meaning of those words from his childhood in Ambridge, Pa., from Sophi and Andrew Malinowski. His father worked hard in the Pittsburgh steel mills and taught young Stas the value of reliability and hard work. Being especially close to his father, he learned tenacity, honesty, his Our Father, the Hail Mary, love of football, love of music. His father was gifted in this area and played a number of instruments. His son chose to learn to play the trumpet.

But the most important lesson taught was love of family and neighbor. Stas took this tradition to heart and practiced love, especially on his mother and father daily. They continued to teach him to understand that we don’t instinctively choose to love others. In fact, the first object of our love is the self. But he learned from them and his home parish that we are chosen for love of God and others first. As St. John reminds us in today’s Gospel reading, “you have not chosen me; I have chosen you.” Once we discern this truth, the grace of being chosen for love transforms us and empowers us to love one another as his disciples.

Through his high school and early in college, Father Stan could not decide which was his greater love: God, music, or his beloved Pittsburgh Steelers. He loved football and played wherever and whenever he was given the opportunity. But God won out.

Gradually he discerned a desire to live out the words of Jesus and the religious heritage of his family in a more concrete fashion. Like the young Samuel in 1 Samuel, Chapter 3, he asked the Lord to “speak.” He was ready to listen. He began to experience an attraction to the priesthood. He understood that a call to discipleship, to the priesthood, does not begin with a choice but with a call.

The more he thought about the feeling inside him, he began to understand that Jesus alone is the author of a call to any vocation. At times, the call comes unexpectedly; sometimes it comes only after much struggle and discernment. But it is to a life where Jesus is the focal point and the follower does not look back at the plow.

As the idea of the priesthood continued to take root in his mind and heart, he petitioned the Bishop of Pittsburgh to accept him as a candidate for the priesthood. He was told that there was no need for seminarians at the time. Like young Samuel serving Eli in the temples, he was given to understand the Lord may not be calling. He could go back “to sleep” — to pursue his studies, work, and lay out his life plan in another direction. Vocations were plentiful in the 40s and 50s, so he was not needed in the Diocese of Pittsburgh.

So he focused on work and his college studies. Once again, like Samuel in the Bible, he persisted to pray “Here I am, Lord.” He sought admission to the Polish seminary in Orchard Lake, near Detroit, Mich. His second attempt to offer himself for the priesthood received the same response for the second “Eli” — Orchard Lake Seminary. “I did not call you. Go back to sleep.” Consultation and visit to Orchard Lake Seminary did not materialize.

But Father Mal would not give up. Eventually he heard of a group of seminarians gathering at St. Bede’s College in Peru, Ill. He decided to visit, and found a welcome in their midst. To his surprise, Bishop Schlarman was to visit the seminarians during those summer days. This would be it! He would approach the bishop and offer himself to the Diocese of Peoria. Eli — this time in the person of Bishop Schlarman — asked young Stanley Malinowski if he was industrious and seriously desiring to become a priest. For the third time, as young Samuel in the Bible story, young Stan Malinowski asked in his heart “Are you calling, Lord?” “Speak, your servant is listening.” He assured the bishop that he really wanted to be a priest for some time.

“Come and see me in the morning,” said the good bishop. “I will accept you to study for the Diocese of Peoria.”

Finally, the call was acknowledged! His courage, tenacity and trust in God would remain his hallmark for the rest of his life.

The years at St. Paul Seminary in Minnesota went by quickly. He came to be known as “Stan, the man behind the Band.” Studies were important, but music was never far behind as he formed and conducted the seminary band, thus bringing life to seminary life — which at times needs music to liven things up. At the same time, he grew in understanding of the Church.

Upon ordination, he gave himself completely to love the Church as a shepherd. His favorite expression was “shepherding.” The word of St. Paul to the Romans in today’s second reading expanded his vision of the Church. He was to serve Christ in every member of this Body. Although the Body is one, it consists of different members with different needs. As St. Paul teaches in Ephesians, Jesus “gave some as apostles, others as prophets, others as evangelists, others as pastors and teachers to equip the holy ones for the work of ministry, for building up the body of Christ. Father Malinowski would build with all his energy.

Father Stan loved to exercise his gift of preaching and teaching above others. Actually, he simply loved to talk. This gift endeared him to folk beyond his “flock” wherever he served. His friends included evangelicals, Jews, non-believers, searchers, Catholics and anyone you might mention. He considered himself a common man. My friend, Father George Remm, reminded me that — one day as Father Mal arrived at one of his assignments — in his strong voice and calm manner he announced: “My name is Father Malinowski. I weight 238 pounds, and the last Irishman who told me a Polish joke is still black and blue.” He certainly had the common touch.

His teaching enlightened students at Alleman High School in Rock Island, where he also conducted a music band, Schlarman High School, St. Elizabeth School of Nursing in Danville, and adults — wherever he spoke. But no matter where he served, he served as a shepherd after the heart of the Good Shepherd. The poor knew his care; the grieving and sad knew his compassion and uplifting words. The stray knew his welcome, the seekers found the door of his heart open, children had a champion. Brother priests, especially the young priests of our diocese — whether they knew it or not — had his attention, his concern, and his constant prayers.

In all these ways he lived the commandment of Jesus in the Gosepl of John 15 he chose for today: “This I command you: love one another.”

Father Mal “shepherded” God’s people as a priest for 58 years. He tried to retire from active ministry as he was entitled to with the advance of years. But his love for the Church and his priesthood would not allow that. The closest he came to retirement was when he reached senior priest status and became Pastor Emeritus in 1997. In reality, this changed nothing. He continued to work as hard as ever until this Tuesday past, Jesus told him, “Stan, it is time to come home to my Father’s house.”

In May of 2011, Father Mal shared with me that he was diagnosed with pancreatic cancer. At that time he was given only months to live. He received this news with calm, his usual courage and with great confidence that God would do more for him than any human power or medical ingenuity. As we sat around his table, we decided to pray for a miracle. Our petition was that God would grant him a little more time to continue his “shepherding.” This was always his passion: to answer each telephone call, to respond to as many requests as possible, to continue reconciling people to Jesus and others, to counsel families, to support the grieving, to maintain friendships, to pray intensely to the end. His perseverance, his courage, his self-giving and dedication to God and God’s people speak of him as a true “shepherd” after the heart of the Good Shepherd.

Our prayer was heard; the miracle was granted. God granted him more time with us.

I was privileged to share the last 18 months of Father Stan’s life in a manner beyond my expectations. Each one of our frequent visits turned into joyous celebrations of prayer and the celebration of the sacraments. Simply put, we ministered to each other; he with his courage and profound trust in God, and I, with my simple presence, encouragement and prayer. We always ended with a mutual blessing and prayer for each other. Each time we parted, I would hear his “ja cie kocham” — I love you.”

With the advent of November, Father Mal knew that the miracle we prayed for was granted; he lived 18 months longer than human medicine predicted. He died living out the commandment of Jesus he lived and without fear. Love has no room for fear. He lived the Paschal Mystery to the full.

Dear Father Mal, as we now take you to your place of rest until the Lord comes again, we say to you what you always said to us: “ja cie kocham” — We love you, Father Mal!