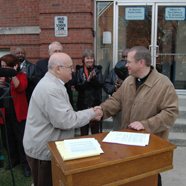 A “beacon” on Peoria’s East Bluff for more than a century, the former St. Bernard’s School will serve the neighborhood in new ways as home for the East Bluff Community Center.

The parish and the community center formalized what was termed a “historic partnership” with the signing of a lease Nov. 29 outside the former school’s main entrance across Kansas Street from St. Bernard’s Church.

“The people of this community began this facility generations ago to be a beacon on the East Bluff,” said Msgr. Deptula, pastor of St. Bernard’s Parish. He called the educational, recreational, and service programs to be offered through the East Bluff Community Center “true to that original intention.”

“I’m very happy our old building is finding new life, and bringing new life to the people of our community,” he said.

St. Bernard’s School, completed in 1911, educated numerous lay leaders and more priests and Religious than any other parish grade school in the diocese. It closed at the end of the 2004 school year. At that time enrollment stood at 72 in kindergarten through eighth grade.

In the ensuing years the school and gymnasium have had many uses, including housing some diocesan offices for a time, and now a food pantry and English-as-a-Second Language classes through Catholic Charities and the parish. Those outreaches will continue.

Both Msgr. Deptula and Jim Combs, board president of the EBCC, emphasized that St. Bernard’s Parish retains ownership of the 110-year-old building and will still put it to use.

“We will continue to host our famous fish fries and the annual chicken noodle dinners, assured Msgr. Deptula.

He told The Catholic Post that when initial plans for the new arrangement were announced at Masses a few months ago, it was greeted with robust applause.

“All these rooms will be used in some way,” said Combs, who heads a board that includes various civic and religious leaders. “Classrooms will become community rooms” and several neighborhood associations, clubs and agencies that at present meet in houses will now call the community center home. Many representatives of those groups witnessed Thursday’s signing.

“The East Bluff Community Center envisions a community facility open to all residents of the East Bluff so they can gather for self improvement, child and youth development along with family and community enrichment,” said Combs.

“This is one of the greatest things that could happen to the East Bluff area,” added the Rev. Simon Holly, who has been pastor of the Prince of Peace Missionary Baptist Church for 12 years.

Combs foresees a time in the near future when the building is lit up at night with activities such as art classes, English classes, wellness fairs, senior programs and sporting events. A formal dedication and open house is planned some time after the lease takes effect on Jan. 1.

“The building is in excellent condition,” said Combs, who foresees no major structural changes to accommodate new uses.

Patricia Gibson, chancellor of the Diocese of Peoria, worked out many details of the lease.

She called it “a great example of people coming together to share resources for a common goal” and “a historic day for all involved.”

“If this model proves successful, this could be a great way to bring new use to other facilities,” Gibson added.