About 50 pilgrims from the Diocese of Peoria are home from a World Youth Day experience in late July with Pope Francis in Poland they find impossible to adequately describe, but are compelled to share.

“It was a very blessed experience, but something I could never have imagined,” said Shelby Ludolph, a 2016 graduate of Peoria Notre Dame High School who is about to begin special education studies at Illinois State University in Normal.

How could she imagine being with nearly 2 million young Catholics from around the globe in a “Field of Mercy” outside Krakow for an overnight prayer vigil and morning Mass on July 30-31? Yet, it was in that field — while kneeling and adoring Jesus in the Blessed Sacrament — that Ludolph said “it clicked for me” how she will be supported in witnessing for Christ during her college years and throughout life.

“At the vigil they gave everyone a candle,” recalled Ludolph, one of five pilgrims from St. Mary Parish in Kickapoo. “As I was holding my candle, I thought ‘I may be one candle, and that candle will give off light, but look at all the other candles around me.’ And when we put all of our light together, we become such a beacon.

“It changed my outlook,” she said. “Yes, I’m going to college and I have to be an example, but there are other people around me who are going to be doing the same thing, striving to be holy.”

“A COMMUNION OF HEARTS”

Ludolph was part of a pilgrimage to the holy sites of Poland and World Youth Day organized by the Servants of the Pierced Hearts of Jesus and Mary. One hundred youth and chaperones took part, with half from the Diocese of Peoria and others from the Miami area. 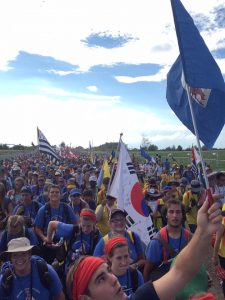 Those taking part in a World Youth Day Pilgrimage sponsored by the Servants of the Pierced Hearts of Jesus and Mary join the throngs walking to the “Field of Mercy” near Krakow, Poland. (Provided photo)

The pilgrims — who left July 15 and returned after a final stop in Prague of the Czech Republic — traveled with prayer intentions and thoughts of their family members and parishioners back home, said Sister Clara Maria Malay, SCTJM, assistant director of the St. John Paul II Catholic Newman Center at Illinois State University in Normal.

“It was very much a communion of hearts,” said Sister Clara, who was one of several members of her religious community on the trip. Others included Sister Sara Kowal, SCTJM, a theology teacher and campus minister at Peoria Notre Dame, and Mother Adela Galindo, SCTJM, foundress.

“It’s ours to share,” she told The Catholic Post. “We felt very much that we were taking the local church with us” as the pilgrims took part in Masses, interceded before relics of saints, and prayed at sites such as Jasna Gora monastery, home of the image of Our Lady of Czestochowa.

Poland is the homeland of St. John Paul II, who began World Youth Day while pope in the 1980s, and the Newman Center at Illinois State University that bears his name sent 29 pilgrims on the trip.

Among them was incoming senior Alex Buldak of Joliet, who called the pilgrimage “a game-changer for how I want to live my life.”

“How do I come back and live the same way?” asked Buldak, who was greatly impressed by the sacrifices of the saints and holy people of Poland, including St. Maximilian Kolbe, who volunteered to die in the place of a stranger in the Nazi death camp of Auschwitz during World War II.

“Seeing how he lived his life, how strong a devotion he had to Mary, and how serious he was about it, made a big impact on me and how I view Mary,” said Buldak. “Am I willing to die for the Catholic faith? That’s huge.”

Like Ludolph, he found strength in the Field of Mercy, where “I’ve never felt more of a home feeling for the Catholic Church.”

“I couldn’t have been farther from my home,” said Buldak, “but surrounded by the group we were with and the Servants of the Pierced Hearts — who have helped form me over the past three years — it was amazing.”

A PILGRIMAGE, NOT A VACATION

The trip was also difficult at times. The seven-mile walk from Krakow to the Field of Mercy was long, hot, and crowded. As the local pilgrims neared the site, the crowd was so vast and tightly packed that the last mile took a few hours.

“But what a great way to unite our sufferings with the Lord and to get a small sense of what it was like for him to carry that cross to Calvary,” said Ludolph. “We don’t get many chances to do it in that literal of a sense at home.”

Sister Clara said some pilgrims left to find food for the group during the evening vigil, were delayed, and ended up missing that evening’s talk and adoration led by Pope Francis. The disappointing experience proved to be a “great lesson,” she said, as the group realized those who went for foot may have received the most graces among thegroup because they were being the “hands and feet of mercy” that Pope Francis spoke about.

“Parts of the pilgrimage were very hard,” said Sister Clara. “But our lives and our journeys toward heaven are very hard. The Lord doesn’t ask us to do anything he hasn’t done himself. We can be strengthened by that.”

While special moments abounded as the local pilgrims traveled to seven cities, toured cathedrals and basilicas, and walked in the footsteps of saints, “my family agrees the ultimate height of the trip took place in the presence of Pope Francis,” said D’Arcy Conley, a member of St. Mark Parish in Peoria who traveled with her four children. The Conley family’s story of raising funds for the trip through months of bake sales at area parishes was told in the July 17 issue of The Catholic Post.

The local pilgrims take part in a Stations of the Cross devotion during their three-week tour of the holy sites of Poland and Prague. (Provided photo/The Servants of the Pierced Hearts of Jesus and Mary)

“The longer I’m home and the more time I have to ponder all that we did, all that we saw, all that we experienced, I’m just in awe,” said Mrs. Conley. She told of daily Masses in cathedrals and shrines of Poland, the homilies of accompanying priests and the teachings shared by the Servants of the Pierced Hearts of Jesus and Mary, and “venerating more saints’ relics than the average person will ever get to do in a lifetime.”

“Everyone should attend World Youth Day at least once in their lifetime,” said Maddie. a senior at Bradley University in Peoria.

Pope Francis’ message that young people not be “couch potatoes” opting for a life of ease and convenience was inspirational to several local pilgrims.

Among them was Jacob Hopper, a 2015 Peoria Notre Dame graduate who is going to take a semester away from college to consider possible missionary work.

He told The Catholic Post the experience reinforced to him that the Catholic Church “is still very much alive and working throughout the world.” A member of Holy Family Parish in Peoria, Hopper hopes to take the lessons he’s learned to help other youth practice and get involved in their faith.

“Who wants to be called a couch potato Christian?” chimed in Ludolph. “I know I don’t.”

“There’s nothing sadder than going through life without leaving your mark,” said Sister Clara. Such will likely not be the case with the World Youth Day pilgrims, who now realize they are far from alone in their enthusiasm for the faith and are more inspired than ever to share it.

“This is going to ignite a fire in their hearts,” Sister Clara predicted.

EDITOR’S NOTE: Dozens of photos and videos from the local pilgrims’ experiences in Poland and the Czech Republic have been posted on Facebook.

Pilgrims take part in the Stations of the Cross during their 3-week tour of the holy sites of Poland and the Czech Republic. (Provided photo/The Servants of the Pierced Hearts of Jesus and Mary)