Baby Rose’s short life long on love, lessons for mother — and many others 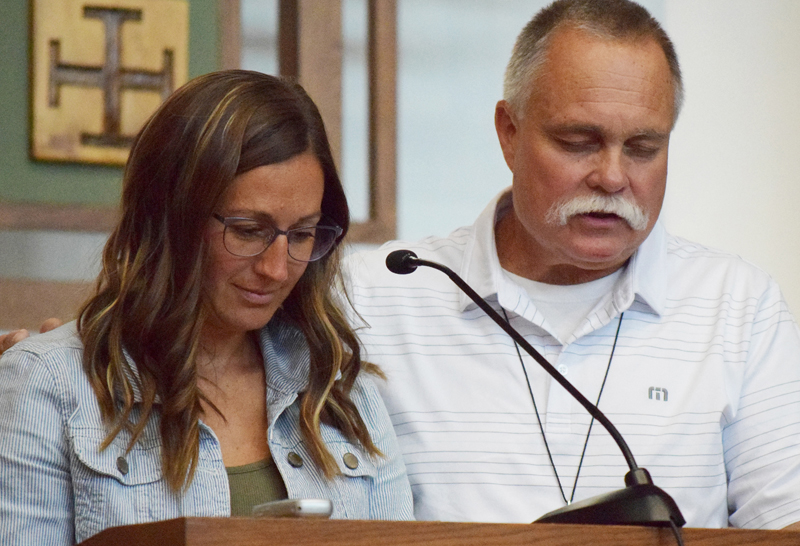 Deacon Mark Jackson prays with Morgan Matson before her presentation at Christ the King Church in Moline. Matson shared the story of her first pregnancy with daughter Rose, who died shortly after birth. (The Catholic Post/Tom Dermody)

MOLINE — Medical records say Baby Rose lived for two hours and 24 minutes on April 10, 2015. But the 2.3-pound, 8-inch-long bundle of love left an eternal imprint on her mother’s life and continues to help others grow in faith and wisdom.

“I needed this little girl to guide me back to the Lord, and she needed me,” Morgan Matson told a recent gathering at Christ the King Church in Moline. “Together, we needed the Lord and our Mother Mary to help our relationship grow. They helped me become a Mommy.”

Morgan, who lives in Viola with husband James and their healthy 10-month-old son, Decker, shared the story of her challenging pregnancy as one of four speakers at an evening focusing on the beginning of life. She also pointed to three saintly role models “especially with what is going on in the news lately about women and their choices.” (See related story.)

While the birth of a child is ideally one of life’s greatest joys, “our journey is not always the easiest thing in the world,” said Anna Catour, adult faith director at Christ the King, in introductory remarks. “Sometimes we take different paths,” she added, promising “an emotional and powerful evening” that proved exactly that as deeply personal stories of pain, forgiveness, God’s love and grace, and even a proven miracle were told.

Morgan Matson’s path began on Sept. 24, 2014, when she found out she was pregnant. Not married at the time, she admits her faith life then was “incomplete.” She nervously informed her parents, who immediately embraced her.

Then came “the dreaded 12-week ultrasound,” which revealed abnormalities that needed further examination.

“If there is anything you can take away from this story, it’s not sadness, it’s not sorrow. It’s that God is good and he puts exactly what you need right in front of you.” — Morgan Matson

A specialist in Peoria gave “the most devastating news a mother could ever hear.”

“Your baby has a terminal diagnosis. She isn’t going to make it,” said the doctor, using unfamiliar words such as anencephaly, acrania, and omphalocele to describe that Morgan’s baby did not have a skull and the organs were developing outside her tiny body.

The specialist recommend an abortion.

“She still had a heartbeat,” recalled Morgan, who walked into a bathroom of the medical complex and called the baby’s father. Should she have the abortion, as the doctor suggested? “Or do I continue on this journey knowing only sorrow is what I find in the end?”

Her local doctor also encouraged termination of the pregnancy as “the best way for me emotionally.”

An aunt, however, suggested a place that could help her with the decision — the Women’s Choice Center in Bettendorf, Iowa. Morgan’s mother called “hoping to find comfort,” and found much more.

Vicki Tyler, then the center’s director, was also Morgan’s former high school counselor whom she assisted as an aide in her senior year.

“I knew this place was the place to be, because Vicki was going to be helping me through the process,” said Morgan. “With her help and a lot of prayer, I decided to proceed with the pregnancy, and everyone there were nothing but angels — helping me by talking with me and getting to see my little angel kick and swim her way into our hearts every chance I could.”

Also guiding her was Dr. Karla Polashek, an obstetrician and gynecologist in Moline.

Meanwhile, Morgan was also letting God back into her heart. She joined a prayer group to pray about her struggle. Coincidently, the leader of the group had lost her firstborn to a similar condition.

“One day she came up to me and shared her story and from that point forward, I knew I was there in this moment for a reason and I was going to be OK.”

When Baby Rose was born, she was tiny but “perfect,” said Morgan.

“I held her and tortured her by putting her footprint on everything I could find. She laid in my arms as family and friends passed through, each giving prayers, and songs, and smiles as her time here on earth was dwindling.”

A priest was present and baptized and confirmed Rose “before she joined our heavenly Father.”

“If there is anything you can take away from this story,” she told her audience, “it’s not sadness, it’s not sorrow. It’s that God is good and he puts exactly what you need right in front of you.”

A year after Rose’s death, Morgan met James, whose mother had been her nurse during delivery. Two years later they were married.

“He has loved me through overcoming my past and has forgiven me for all my sins,” said Morgan. Three years after their wedding, Decker was born. They are members of Christ the King Parish, and Morgan is a physical education instructor at CR Hanna Elementary School in Orion.

“We love being parents and introducing Decker to Jesus and all the wonderful things the Lord has to offer,” she said. “And someday we will introduce him to his guardian angel, his big sister Rose.”

Also speaking during the evening were Ginny Defrieze, Kevin Wright, and Julie Strandberg, who was a nurse present when James Fulton Engstrom, newly born son of Bonnie and Travis Engstrom, miraculously revived after 61 minutes of not taking a breath. The church has declared the recovery a miracle by Jesus through the intercession of Venerable Archbishop Fulton J. Sheen