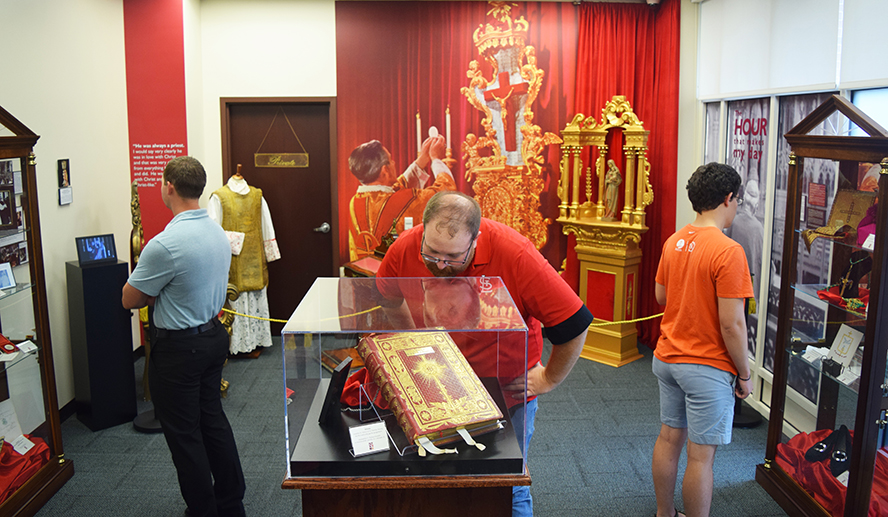 Looking over the new “Man of the Church” display in the expanded Archbishop Fulton Sheen Museum in Peoria are three members of a group of seminarians from Kenrick-Glennon in St. Louis who visited on Labor Day. (The Catholic Post/Tom Dermody) 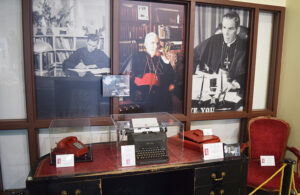 The personal desk, red telephone, and typewriter used by Archbishop Sheen are seen not only in the large photos but are physically present at the expanded museum at the Spalding Pastoral Center in Peoria, thanks to recent donations from his family. (The Catholic Post/Tom Dermody)

The expansion has allowed for the placement of more and larger items relating to the diocese’s famous native son — including a couch, desk, and pieces from his personal chapel brought from New York a year ago by his niece, the late Joan Sheen Cunningham.

“There is now more walking space for groups,” she told The Catholic Post. And the museum, located just two blocks from St. Mary’s Cathedral where the remains of Archbishop Sheen are entombed, hosts groups and individuals from not only around the country but the world.

“They come from everywhere,” she said, a total of about 12,000 visitors since the body of the famed media evangelist, author, and global mission supporter was brought to the cathedral in the summer of 2019.

Sister Lea said the expansion was suggested by Bishop Louis Tylka, who observed that most of the museum’s visitors come for the Sheen exhibit. And new items relating to Archbishop Sheen arrive almost daily, such as stories or photos in letters from people across the country and information acquired from places he visited.

“There is only so much space,” said Sister Lea. “You can’t display it too high or too low.” 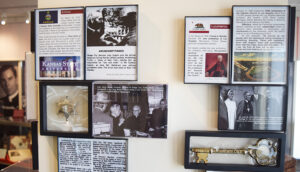 Even the supporting columns in the expanded museum are utilized, displaying artifacts and news clippings from U.S. states Archbishop Sheen visited as well as many countries around the globe. Seen here are an honorary sheriff’s badge from Dodge City, Kansas, and a ceremonial key to the city of Sacramento, California. (The Catholic Post/Tom Dermody)

With the expansion, the museum is now divided into themes corresponding with Archbishop Sheen’s life as a Man of Peoria (with many photos and artifacts from his childhood and early priestly years), a Man of Media, a Man of Missions, and a Man of the Church.

The Man of the Church display occupies the entire extra room and includes a striking, enlarged image of Archbishop Sheen elevating the Host that covers most of the back wall. The image by photographer Yousuf Karsh is from the book “This is the Mass.”

The new-look museum utilizes all available space in creative ways, while still appearing comfortably open and inviting. The windows now include enlarged photo clings of Archbishop Sheen, corresponding to the displays beneath them. Even the room’s supporting columns have a purpose, displaying items and news clippings from the many U.S. states he visited as well as various nations around the world. The mementos include ceremonial keys he received to various cities and even an honorary sheriff’s badge given to him in Dodge City, Kansas.

“When people visit, we always ask them where they come from,” said Sister Lea. “Now we can say, ‘Oh, you’re from Pennsylvania? Let me show you when he was there.”

The Sheen Museum is open from 9 a.m. to 4 p.m., Monday through Friday. It is closed on holy days and holidays. Larger tours are always welcome by appointment. There is no admission charge. For more information on the museum, the tomb of Archbishop Sheen, and his beatification cause visit CelebrateSheen.com or call (309) 671-1550.