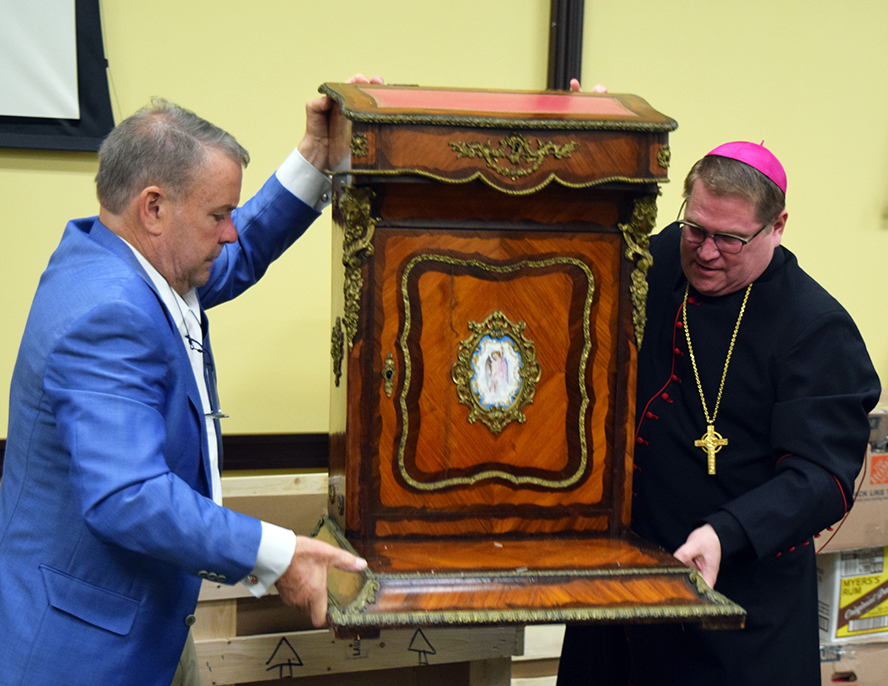 Saturday is Venerable Archbishop Fulton J. Sheen’s birthday, and his niece is giving the Sheen Foundation a truckload of very special gifts — personal items from her famous uncle including the Emmy Award that Archbishop Sheen won in 1952 for his television show, “Life is Worth Living.”

Joan Sheen Cunningham, who lives in New York and is Archbishop Sheen’s closest living relative, is in Peoria with her son Paul to attend a Mass at St. Mary’s Cathedral on May 8, the 126th anniversary of Archbishop Sheen’s birth in nearby El Paso. 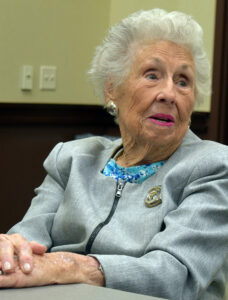 Joan Cunningham, the niece of Archbishop Fulton J. Sheen, describes one of the many “treasures” from her uncle she is giving to the Sheen Foundation. (The Catholic Post/Tom Dermody)

Coadjutor Bishop Louis Tylka will be principal celebrant of the Mass, offered in front of Archbishop Sheen’s tomb. Bishop Daniel R. Jenky, CSC, will be present along with other Sheen family members. The homilist will be Msgr. Stanley Deptula, executive director of the Archbishop Fulton J. Sheen Foundation.

While in-person attendance at the Mass is by invitation only, the 8 a.m. liturgy will be livestreamed via a link on the Diocese of Peoria website, cdop.org.

On Thursday, the bishops as well as Sheen Foundation leaders got an early look at the items Mrs. Cunningham brought as the crates were opened at the Spalding Pastoral Center in Peoria.

“The donation of these wonderful effects of Archbishop Sheen are truly a gift from Joan Cunningham,” said Bishop Tylka in a news release from the Diocese of Peoria announcing Saturday’s Mass and the presentation of the personal items. “They will all help us to continue to promote the legacy of Venerable Sheen for generations to come.”

Bishop Tylka will eventually succeed Bishop Jenky — who opened the sainthood cause for the famed media pioneer, author, and evangelist nearly two decades ago. On Thursday, he assured Mrs. Cunningham that he, too, is committed to promoting Archbishop Sheen’s cause and legacy, “especially in the area of evangelization.” 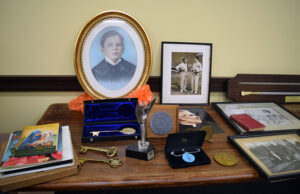 Just a few of the personal items being given to the Sheen Foundation by Joan Cunningham — including photographs of Archbishop Sheen, books, and various awards — are shown on a table May 6 in the Spalding Pastoral Center on Thursday. (The Catholic Post/Tom Dermody)

“God willing, the Church will one day canonize this holy man,” said Bishop Tylka, “but until then we will continue to do everything we can in the Diocese of Peoria to share the story of this Servant of God.” He expressed deep gratitude to Mrs. Cunningham and Paul Cunningham for their generosity.

Also present was Dolores Sheen, a niece of Archbishop Sheen and member of St. Anthony Parish in Bartonville. She and Mrs. Cunningham gave the background on each of the items as they were lifted from the boxes and crates — including keys to various cities Archbishop Sheen had been given to a photograph of him in Washington, D.C., with his large dog, Chumley.

“That’s my favorite picture,” said Mrs. Cunningham. “It’s so typical of him.”

“This has been fun,” said Dolores Sheen as the final boxes were opened.

EDITOR’S NOTE: More photos from the May 6 arrival of the boxes have been posted to The Catholic Post’s site on Facebook.