‘Gift’ of St. Teresa of Kolkata remembered by diocese, world 25 years after her death 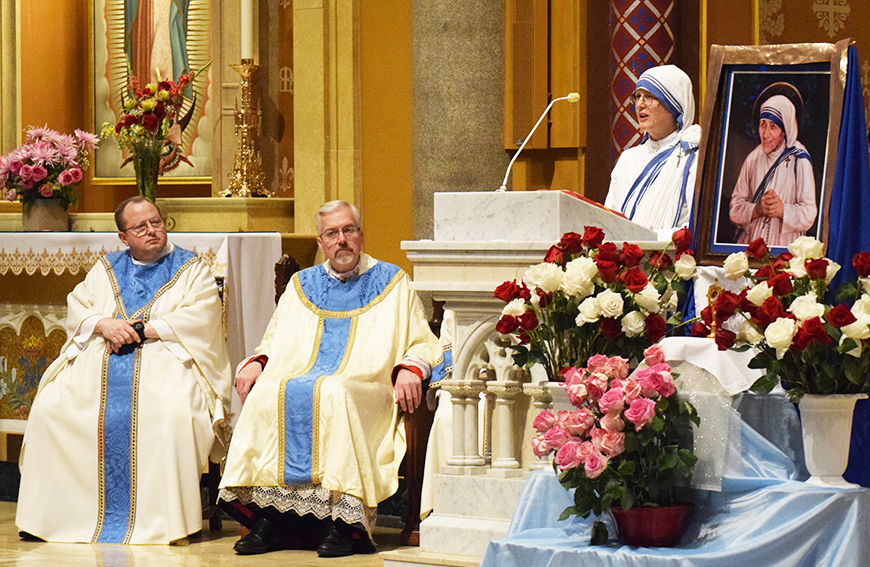 Sister M. Zita, MC, gives a reading at the Sept. 5 Mass at St. Mary's Cathedral in Peoria marking the 25th anniversary of the death of St. Teresa of Kolkata, foundress of the Missionaries of Charity. Looking on are Father Donald Roszkowski and Msgr. Philip Halfacre, vicar general, who concelebrated the Mass. (The Catholic Post/Tom Dermody)

The Diocese of Peoria joined Catholics worldwide Sept. 5 in prayerfully remembering St. Teresa of Kolkata — known popularly as Mother Teresa — on the 25th anniversary of her death. 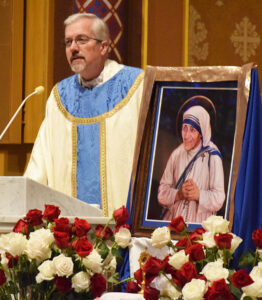 Msgr. Philip Halfacre, vicar general of the Diocese of Peoria, gives the homily at a Mass at St. Mary’s Cathedral in Peoria on Sept. 5 marking the 25th anniversary of the death of St. Teresa of Kolkata, known popularly as Mother Teresa. (The Catholic Post/Tom Dermody)

“Mother Teresa is a gift that God gave to the Church,” said Msgr. Philip Halfacre, vicar general of the Diocese of Peoria, at a Mass celebrated that morning at St. Mary’s Cathedral in Peoria. “And today, especially today, we thank him for such a beautiful gift.”

“It’s such an honor and a blessing to have you all here with us to honor our dearest Mother’s life,” said Sister M. Zita, MC, in remarks at the end of Mass. Next to the ambo was a framed image of St. Teresa. Beneath the image was a blood relic of the saint surrounded by dozens of red, white, and pink roses.

THREE WAYS SHE WAS A ‘GIFT’ TO CHURCH

Msgr. Halfacre, representing Bishop Louis Tylka who is in Rome, called St. Teresa “an apostle of joy” and said her feast day is “a happy day.”

In his homily, Msgr. Halfacre outlined three of the many ways St. Teresa was a gift from God: 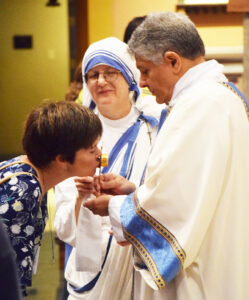 Karen Flaherty, a member of St. Jude Parish in Peoria, venerates a blood relic of St. Teresa of Kolkata, held by Deacon Ed Mallow. Looking on is Sister M. Zita, MC, one of four Missionaries of Charity serving in the cathedral neighborhood. (The Catholic Post/Tom Dermody)

“May we be people who continue to be inspired by her example, and who benefit from her prayers in heaven,” said Msgr. Halfacre, who is also pastor of St. Michael the Archangel Parish in Streator and Sts. Peter and Paul, Leonore.

In her remarks, Sister M. Zita noted the Communion meditation sung by cantor Aria Main, “”O What Could My Jesus Do More,” was a favorite of Mother Teresa.

She also encouraged all to consider viewing the newly produced documentary, “Mother Teresa: No Greater Love,” to be shown in theaters nationwide Oct. 3-4.

Following Mass, those present were invited to venerate the blood relic of St. Teresa and also place prayer petitions in a designated box.

“Today is an ideal day to ask for favors from Mother,” said Msgr. Halfacre. So bring your intentions by the armful to Mother today.”

EDITOR’S NOTE: More images from the Mass have been posted to The Catholic Post’s site on Facebook.