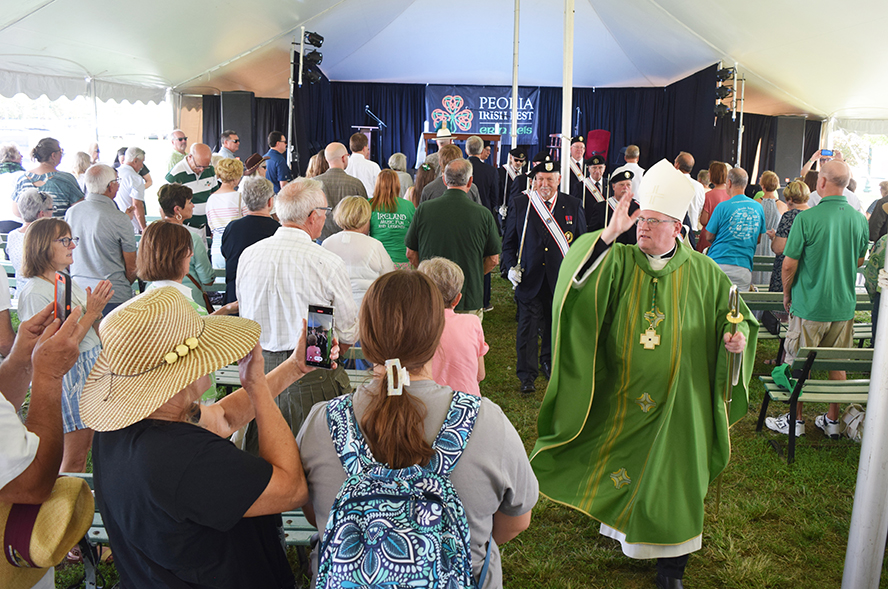 Bishop Louis Tylka blesses the assembly at the conclusion of the Mass for Peace and Justice celebrated Aug. 28 beneath a tent on the riverfront grounds of the Peoria Irish Fest. (The Catholic Post/Tom Dermody)

As he prepares to leave for Rome on Aug. 30, Bishop Louis Tylka is requesting prayers for his participation in “baby bishops school” and especially for planned meetings with Vatican officials regarding the sainthood cause of Venerable Archbishop Fulton J. Sheen. 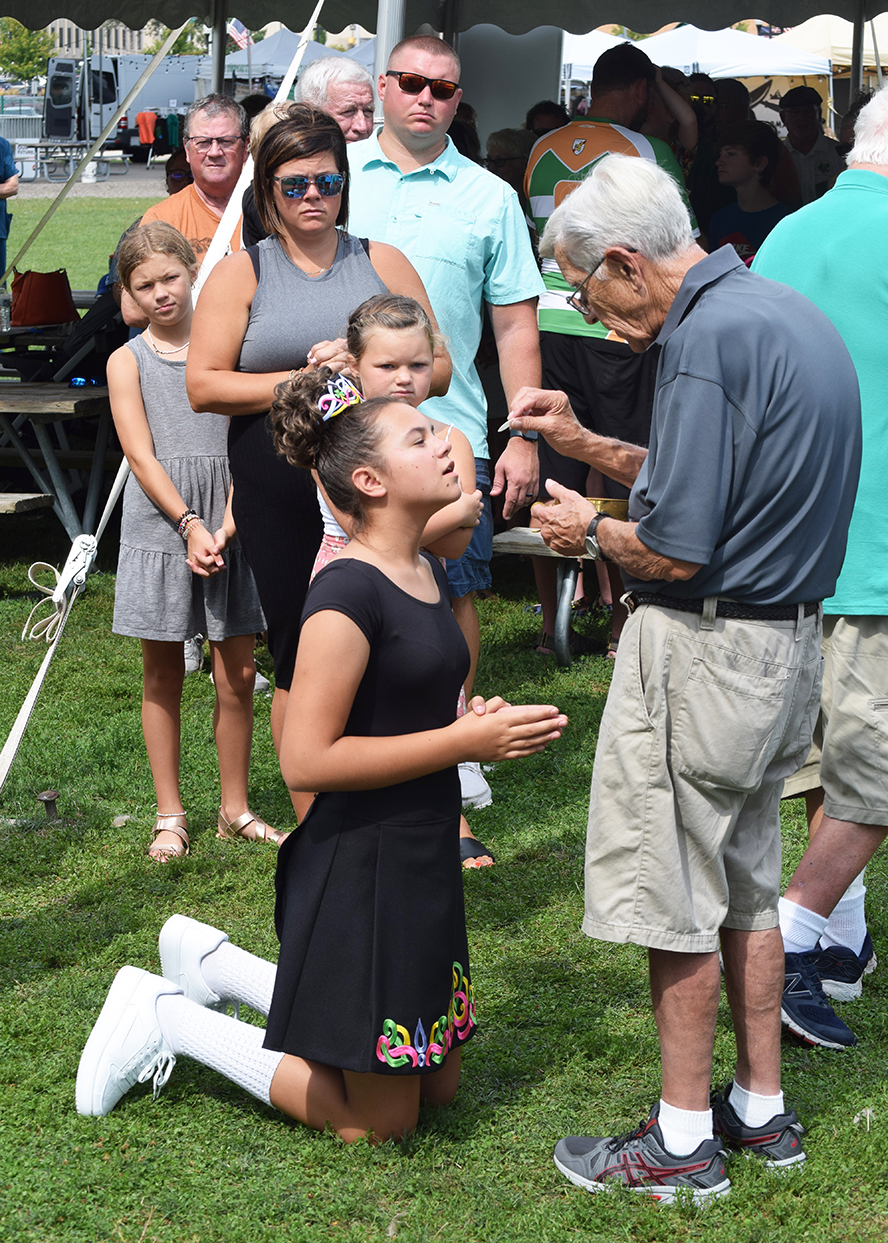 Lucy Buettner, 12, of St. Mark Parish in Peoria, receives Communion from Dave McCauley, past president of the local division of the Ancient Order of Hibernians. Lucy performed at the festival as a member of the Flynn School of Irish Dance. (The Catholic Post/Tom Dermody)

Bishop Tylka was the principal celebrant Sunday at an outdoor Mass for Peace and Justice on the grounds of the Peoria Irish Fest celebrated along the banks of the Illinois River. Hundreds attended, filling a large tent at the festival’s North Stage with dozens seated or standing outside.

“Every year in September, all the bishops around the world that were appointed in the past year are gathered by the Holy Father for some days of prayer, reflection, and instruction,” said Bishop Tylka at the conclusion of the Mass. He noted that because of COVID-19, the annual training program has not taken place for three years, so this year’s group will be large.

“I’ve been a bishop for two years, and I’m finally going to new bishop school,” he told the assembly, drawing laughter as he added he hopes to earn a diploma. His first class is Thursday.

While in Rome, Bishop Tylka will also meet with the head of the Congregation for the Causes of Saints to obtain “any direction I can to help us move forward with the cause of Venerable Archbishop Sheen.” The Diocese of Peoria hopes to host beatification ceremonies for the famed media evangelist, author, promoter of worldwide missions, and native son whenever approval is granted by Pope Francis. 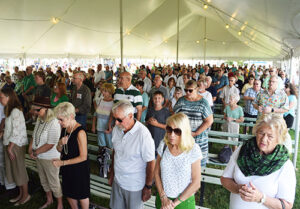 Mass-goers not only filled the large tent but more than 100 stood outside during the Mass for Peace and Justice celebrated on Aug. 28 by Bishop Tylka on the grounds of the Peoria Irish Fest. (The Catholic Post/Tom Dermody)

“Please continue to pray for the cause,” Bishop Tylka urged. Special Sheen rosaries were distributed at the Mass and at a festival booth the Archbishop Sheen Foundation shared with the Knights of Columbus.

The Mass at Irish Fest featured music provided by the Chicago-based group Paddy Homan and the Noble Call, with portions sung in Gaelic and the “Irish Blessing Song” sung as a Communion meditation.

The annual liturgy is coordinated by the Ancient Order of Hibernians. Those attending, many dressed in green, brought canned goods for area food pantries as admission to the festival grounds.

In his homily on the theme of humility, Bishop Tylka said we should not exalt ourselves, but rather let Jesus raise us up “because of the life we live — a life of faith, discipleship, love, and mercy.” At the end of Mass, he bestowed a traditional Irish blessing with a concluding request that “when you die, may you be in heaven a half-hour before the devil knows you’re dead.”

Concelebrating the Mass was Father David Heinz, a senior priest of the diocese who serves as chaplain for the Ancient Order of Hibernians, Richard Parsons Division.

EDITOR’S NOTE — More photos from the Mass at the Peoria Irish Fest have been posted to an album on The Catholic Post’s Facebook page.