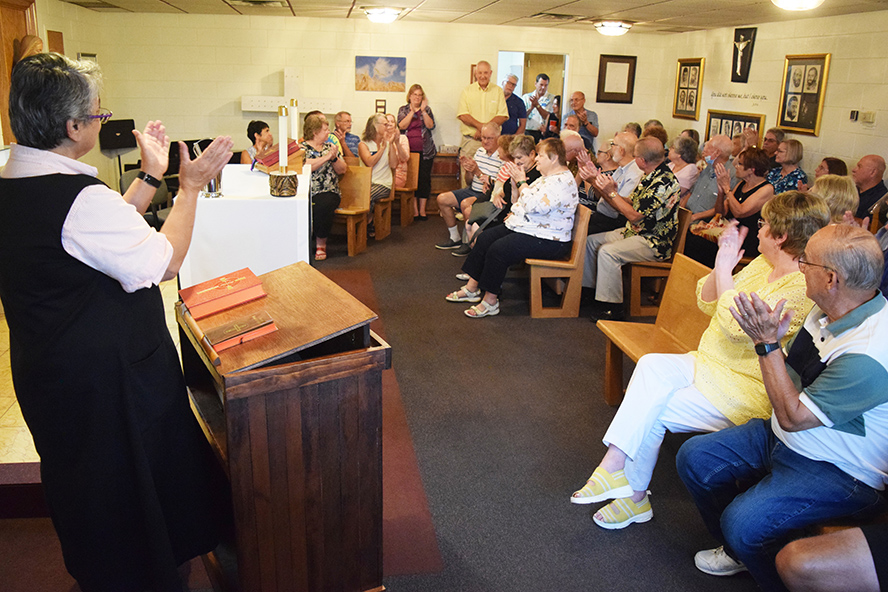 In the palanca chapel of the new Peoria Cursillo-TEC Center during an open house on Aug. 8, Sister Subha Clare Ramesh, OSF, assistant spiritual director of Peoria Cursillo, leads applause for Tim Petz, who coordinated a volunteer effort to prepare the former Holy Family Convent in Peoria for its new use. (The Catholic Post/Tom Dermody) 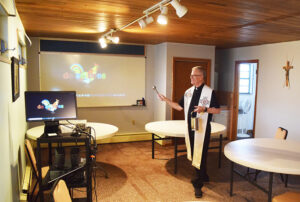 Msgr. Gerald Ward blessed all rooms of the Peoria Cursillo-TEC Center, including this conference room named for the late Deacon John Skender. (The Catholic Post/Tom Dermody)

“This is a place where we will proclaim the Kingdom of God in many ways in our sharing, in our prayers, in the development of our teams, and in all that will take place here,” said Msgr. Ward, pastor of Blessed Sacrament Parish in Morton and long active in Cursillo. “This will become holy ground.”

Msgr. Ward presided during blessing ceremonies at the conclusion of a well-attended open house on Aug. 8 at the new center, 2312 W. Wagner Lane in Peoria.

The location is the former Holy Family Convent. As many as 50 volunteers have spent recent weeks painting, moving furniture, decorating, and organizing the new facility.

The Diocese of Peoria had announced in March that use of the Spalding Renewal Center — the former Spalding Institute near downtown Peoria that had been the home of Peoria Cursillo and TEC for three decades — would be “significantly” restricted effective May 15 because of the extent of needed repairs. 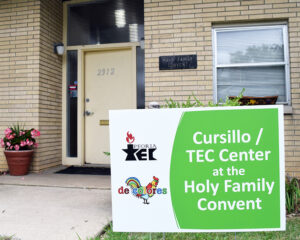 The new center is located at 2312 W. Wagner Lane in Peoria.

Within six weeks, Peoria Cursillo-TEC officials accepted an offer from Holy Family Parish to relocate to the former convent.

Sister Subha Clare Ramesh, OSF, assistant spiritual director of Cursillo, thanked all who assisted in preparing the new center for use and gave special credit to Tim Petz for coordinating the effort.

“This made for a perfect move, benefiting Holy Family and benefiting Cursillo,” said Petz, who has been involved in Cursillo since 1991 and was in charge of maintenance at the former center.

The new location can be accessed from either Wagner Lane or the Holy Family church/school parking lot. In addition to Cursillo and TEC offices and the chapel, the center has a team meeting room and two conference rooms named and decorated in memory of Father Thomas Henseler and Deacon John Skender.

The palanca/wheat chapel is the former perpetual adoration chapel at Holy Family. Sister Subha pointed out the space was designed to replicate the chapel at the Spalding Center, utilizing the same wall hangings and furniture.

Cursillo’s Monday night Masses are to resume at the new center at 7 p.m. on Aug. 22.