The former Holy Family Convent on Wagner Lane in Peoria will be home to Peoria Cursillo and Teens Encounter Christ offices. (The Catholic Post/Tom Dermody)

Peoria Cursillo has announced that the former convent at Holy Family Parish in Peoria will be the new home for its offices, palanca chapel, and team formation.

“Holy Family Parish has graciously welcomed us to make ourselves at home and to bring new life to this building” on Wagner Lane, said Dave Templin, lay director of Peoria Cursillo, in a series of updates given May 2 at a service in the chapel of the Spalding Renewal Center. 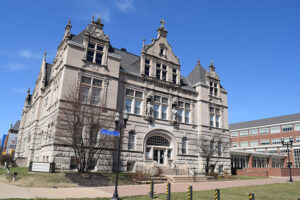 For more than three decades, the Spalding Renewal Center at 401 N.E. Madison, Peoria, has been home to ministries including Peoria Cursillo, Spanish Cursillo, and Teens Encounter Christ. (The Catholic Post/Tom Dermody)

The Diocese of Peoria announced in March that use of renewal center — the former Spalding Institute that has been the home of Peoria Cursillo and Teens Encounter Christ for three decades — would be “significantly” restricted effective May 15 because of the extent of needed repairs. The diocese emphasized it has no plans to “sell, change, or tear down” the historic structure built in 1901.

Peoria Cursillo has been hosting a series of farewells to the “holy ground” of the renewal center, including an Ultreya set to take place there at 7 p.m. on Saturday, May 7. It will include a Mass celebrated by Msgr. Gerald Ward and a reflection by Ken Zika on the theme “In God’s Time.”

TEC, meanwhile, invites all former retreatants to a final event at the renewal center from 4 to 10 p.m. on Wednesday, May 11, highlighted by a Mass at 6 p.m.

In his talk Monday evening, Templin also announced to loud applause that Cursillo weekends will resume this fall with a men’s Cursillo Sept. 29 to Oct. 2 and a women’s Cursillo Oct. 27-30. They will be the first Cursillos since the onset of the pandemic, and will take place at the Sacré-Coeur Retreat Center in Magnolia.

The diocese’s new retreat center is one of two host sites being considered for Peoria Cursillo after a committee explored multiple options. The other, said Templin, is St. Augustine Manor in Peoria, the program’s former home. St. Augustine Manor will host men’s and women’s retreats early next year.

Experiences gained at both sites will help determine the best location for future weekends.

“The re-launching of Cursillo weekends is huge to our efforts to evangelize and bring our friends closer to Christ,” said Templin, adding the future of Cursillo “is bright and optimistic” with the guidance of the Holy Spirit and the supportive work of Cursillistas.

In a reflection on the history of Cursillo given before a Mass in the Spalding Renewal Center chapel on April 25, spiritual director Deacon Rick Miller recalled the “massive volunteer effort” and fundraising that supported the remodeling of the building in 1991.

“This building is correctly called ‘holy ground’ for it has held the dreams of all who seek a closer relationship with Christ,” said Deacon Miller. “Christ, thankfully, will be with us as we leave this wonderful old building.”