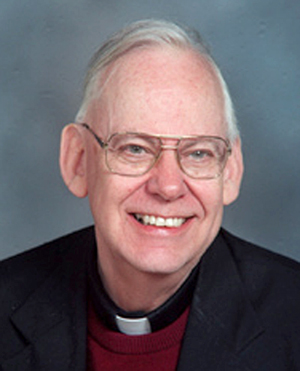 GREEN VALLEY, Ariz. — Father Joseph Anderson likes to look up. He’s not necessarily seeking heavenly guidance — although there are those moments — but studying the sky.

“I got to know astronomy when I first came here to Green Valley,” he told The Catholic Post. “It’s been very helpful to appreciate the universe in which we live. There’s a certain regularity about it, but there’s also a certain irregularity. Things come together eventually for the good of the expanded universe.”

Father Anderson has had many ways to seek and know God over the last 60 years of ordained ministry and retirement didn’t put an end to that. These days he concelebrates Mass at Our Lady of the Valley Church and still hears confessions as often as possible.

“To see the light coming on for people after they’ve made a good confession” is one of his greatest joys.

The parish will help him celebrate his milestone anniversary with a Mass on Friday, June 3. A brunch will follow in the parish hall.

The son of John C. and Margaret (McGrath) Anderson, Father Anderson was born March 21, 1935, in Peoria. He attended St. Mark School and Spalding Institute in Peoria and went to St. Ambrose College in Davenport, Iowa, with the thought of studying medicine.

“Then the Lord inspired me to think about the priesthood because I could do an awful lot of counseling,” he said. “A lot of people come into confession and want counsel. They want some guidance, they want an understanding of how they reform their lives a little bit and reach out a little more lovingly to their family and friends.”

Father Anderson earned a bachelor’s degree in philosophy from St. Ambrose College, and completed his studies for the priesthood at St. Paul Seminary in St. Paul, Minnesota, and Conception Seminary in Conception, Missouri. He was ordained on June 3, 1962, by Bishop John B. Franz at St. Mary’s Cathedral in Peoria, along with Msgr. Richard Pricco.

He was granted senior status in 2005.

One of the greatest influences on his priesthood was Father James Fay, the pastor with whom Father Anderson served at St. Columba in Ottawa. At the time, Father Anderson was preparing for his first assignment as pastor in Elkhart and Mount Pulaski.

“I appreciated everything he did to give me good example,” Father Anderson said. “I just felt that was a wonderful opportunity to get to know how to be a good pastor. I was very much influenced by the way he pastored the people there at St. Columba.”

He said encouraging people to live and live well is one of the hallmarks of priestly ministry.

“We are available to help them in their particular needs, especially when they’re sick and dying. We’re going to be there,” Father Anderson said.

He also wants people to know that priests “do not give up on anybody, even when they have left the church or have different ideas about what church means. We are going to be available.”

He uses the word “encourage” often when he speaks and said he prefers to be positive rather than negative. “There’s way too much negative in the world today,” he explained.