After 60 years of priestly ministry, Msgr. Pricco continues to bless and feel blessed 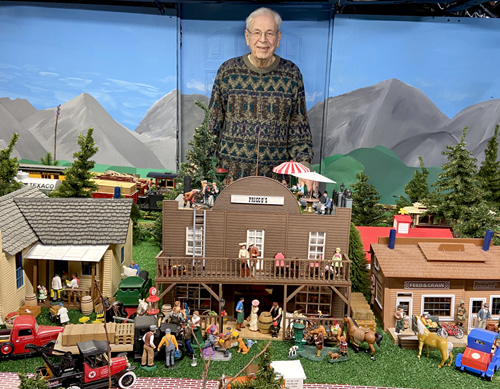 One of the ways Msgr. Richard Pricco expresses his creativity is through this train village, which takes up the entire attic of his LaSalle home. It features Pricco's General Store and Annie's Cafe, named for his mother. His photo can be seen in the window of one of the buildings. (The Catholic Post/Jennifer Willems)

LASALLE — Msgr. Richard Pricco makes it a point to wave to people as he walks his dog each morning. He’s not just being polite.

“The wave is a ‘God bless you!’ I don’t care if they wave back. I’m blessing them,” he said. “And who knows what that blessing does to them that day?”

It is his way of preaching — even if he isn’t using words.

Msgr. Pricco has made good use of his preaching skills over the last six decades.

The wave is a “God bless you!” I don’t care if they wave back. I’m blessing them. . . . And who knows what that blessing does to them that day?

Born Feb. 22, 1937, in Spring Valley, he is the son of James J. and Anna Dolores (Lijewski) Pricco, and grew up in LaSalle. He attended St. Hyacinth School in LaSalle and went on to St. Bede Academy and St. Bede Junior College in Peru. He completed his studies for the priesthood at St. Paul Seminary in St. Paul, Minnesota.

Ordained with him by Bishop John B. Franz on June 3, 1962, at St. Mary’s Cathedral, was Father Joseph Anderson. Two members of their class are deceased: Father John J. Podlashes and Msgr. William Watson.

After ordination, Msgr. Pricco served as parochial vicar at Holy Cross, Champaign, and was named a diocesan consultor in 1974. He was appointed pastor at St. Paul in Macomb in 1977 and would lead the parish and school there until he was granted senior status in 2017.

During his nearly 40 years there, he would serve as vicar of the Macomb Vicariate and assume pastoral care for St. Rose in Rushville in 2006.

He was named a Chaplain to His Holiness with the title of monsignor in 2003.

A conversation with Msgr. Pricco is filled with humor: When he arrived at Holy Cross Church in Champaign and told the housekeeper, “I’m Father Pricco,” she said, “No, you can’t be. You’re too tall!”

But it’s also filled with love for priestly ministry and the people he has served.

“I loved going to the hospital . . . to be with the dying and the sick,” he said, adding that he made it a habit to go to the house of those who died and spend time with the family.

I’m thankful to the Lord that he gave me the opportunity to serve him through his people.

Baptisms filled him with joy, and he always lifted the baby for the assembly to see before the final blessing at Mass. “I think ‘The Lion King’ got that from me,” he quipped.

In addition, there are words of love for St. Paul School in Macomb. Not only did he visit with the principal three or four times a week, but he had lunch with the teachers almost every day.

“My presence there, I think, helped considerably,” he said. “Never had a cross word with a teacher or a principal.”

And the students brightened his days.

“At almost every Mass, at the end, I would tell them, ‘Say your prayers and do your work and everything else will fall into place’ and ‘Remember always, God loves you,’” he said. “They picked up on that and would say, ‘Monsignor, God loves you!’”

So do his former parishioners. When Christmas cards arrive, he keeps them neatly filed in a basket. Each day Msgr. Pricco returns their love by taking the first one out and offering Mass for that person.

“I’m thankful to the Lord that he gave me the opportunity to serve him through his people,” he said.