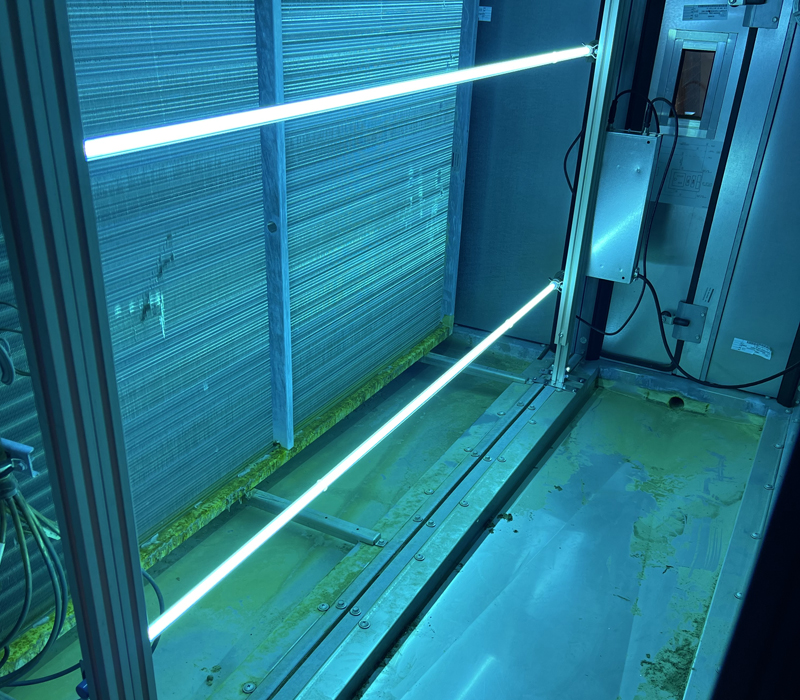 This is an inside look at how the ultraviolet lights are working on the gym ventilation system at Blessed Sacrament School in Morton. “Note the coil is clean, no build-up of biofilm,” said John Huser, buildings and maintenance supervisor. “The only build-up of biofilm is on the bottom and that is slowly being killed.” (Provided photo)

MORTON — Like every other Catholic school in the Diocese of Peoria, Blessed Sacrament School has made it a priority for its 217 students to wash their hands, use hand sanitizer often, and wear masks in order to keep COVID-19 at bay. Last November, they added one more safety measure that sets them apart, however.

With a generous donation from Chris and the late Georgia Glynn, Blessed Sacrament was able to install ultraviolent lights in the ventilation system throughout the school, including the gym, library, computer lab, offices, classrooms, and restrooms. The UV-C solution helps to sterilize the air with the goal of cutting down on viruses, bacteria and mold.

Blessed Sacrament was able to install ultraviolent lights in the ventilation system throughout the school . . . with the goal of cutting down on viruses, bacteria and mold.

While that is a major tool in fighting COVID-19, it should also reduce the incidence of seasonal flu and colds, according to John Huser, buildings and maintenance supervisor at the Morton school.

“UV light is what the sun puts out,” he explained. “It sterilizes things, kills things, this specific UV light.”

The lights, which are blue, work constantly, Huser said. Anything in the air system that passes by the lights is killed.

For example, in the summertime, when the air is warm and humid and the air conditioning is running, it will build up a lot of condensation on the coils, Huser told The Catholic Post.

“That condensation can grow, as you can imagine, a lot of bacteria. This cleans them off,” he said. “It prevents any bacteria or mold from growing because those lights are shining 24/7.”

Huser noted that the UV-C system has an efficiency rate of more than 99 percent.

Principal Mike Birdoes said the idea for the new system grew out of conversations he had with Huser in March 2020, after students were sent home for remote learning as the pandemic began.

“John and I would talk weekly, if not more than that, about how we were going to get kids back into school,” he said.

Huser started to do some research, eventually reaching out to Johnathan O’Brien of KED Mechanical Engineering in Peoria. He had worked on the new addition to Blessed Sacrament School that opened in August 2018.

With O’Brien’s recommendation, they went with Steril-Aire of California.

“I don’t think we had 14 kids absent today. For December, we’ve had a low absenteeism compared to the Decembers before.” — Mike Birdoes, principal

A major donation from the Glynns, longtime supporters and “our guardian angels,” took Blessed Sacrament from plan to reality. Installation began in October 2021 and was completed by mid-November.

There are 18 rooftop units at the Morton school and each one has two of the UV lights, which look like fluorescent bulbs. Birdoes said the lights cost about $15,000 and installation was another $8,000 to $9,000.

The lights are rated to run for 12 to 18 months, Huser added.

“I think the science behind them is solid,” he said. “It was well worth it, I think.”

While it’s a little too soon to determine what effect this has had on sick days, Birdoes said he thinks it’s working already.

“December is usually a month that we have a lot of kids out,” he told The Post, recalling one year that the 24-hour flu went through the kindergarten pretty quickly.

“I don’t think we had 14 kids absent today,” Birdoes said on a recent Monday. “For December, we’ve had a low absenteeism compared to the Decembers before.”