Distinguished Principal: Jane Barrett feels ‘blessed’ to do what she loves at Seton 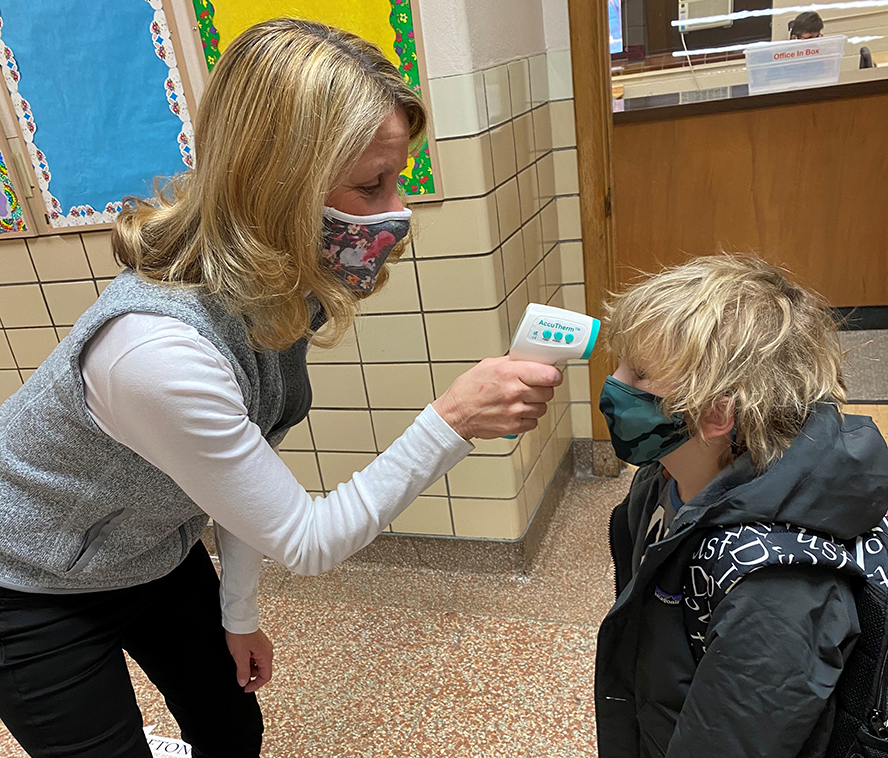 Taking temperatures and screening students for good health are now all in a day's work for Jane Barrett, principal of Seton Catholic School in Moline, as she greets the children each day. (Provided photo)

MOLINE — Jane Barrett always wanted to be a teacher. She remembers playing school with the neighborhood kids in the basement of her childhood home and even then her mother would say, “I swear you got that kid through first grade!”

“I always loved kids,” she said. “It’s just something that I was very blessed that God put me on this earth to do.” 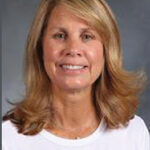 She has been following her vocation for 40 years and has spent all of those years at Seton Catholic School in Moline. A second grade teacher for eight years and assistant principal for two, she has been the principal since 1991.

For the “skill, passion, love, and dedication” she has given to the Seton Catholic community, Barrett was named the 2020-2021 Distinguished Principal of the Year by the Office of Catholic Schools. She will be honored at a Mass and luncheon with Bishop Daniel R. Jenky, CSC, and Coadjutor Bishop Louis Tylka on Wednesday, May 5.

The celebration will include recognition of the 2019-2020 recipients: Msgr. Mark Merdian of St. Pius X in Rock Island and Jordan Catholic School, Distinguished School Pastor of the Year; Dr. Noreen Dillon of St. Mark School in Peoria, Distinguished Principal of the Year; and James Taber of Central Catholic High School in Bloomington, Distinguished Teacher of the Year. The Mass and luncheon last year were canceled due to the COVID-19 restrictions that were in place at the time.

Barrett admits to being “floored” when she received word about the award and said, “I’m humbled, that’s for sure.”

But she doesn’t do what she does for awards.

“I’m here because I love doing this,” she told The Catholic Post.

And she is quick to note that she considers herself lucky to have been surrounded by “so many outstanding men and women,” starting with Father Robert Lee, the pastor of Sacred Heart in Moline when she was hired, and Sister Paula Vasquez, OSF, the principal who became her mentor and encouraged her to get her master’s degree in educational administration. The list includes the pastors who trusted her and the teachers and staff members “who have gone along with me.”

She is also grateful to have been involved in education that is tied to her faith.

“I’m a lifelong, cradle Catholic and that means everything to me,” she said.

Barrett grew up in the Quad Cities and attended Villa de Chantal, an all-girls school owned and operated by the Sisters of the Visitation. She went on to Alleman High School in Rock Island and then the University of Iowa, where she earned a bachelor’s degree in elementary education.

She would return to the University of Iowa for her master’s degree in educational administration.

In addition to having Sister Paula’s backing to continue her studies, Barrett remembers some good advice from Father Lee at that critical juncture.

“He said, ‘I know there are other opportunities for you, but are you ever going to feel like you belong there like you do here?’ and he was right,” she said. “I’ve laughed about it over the years and thought, ‘What a smart man.’ I have not ever regretted one day at Seton.”

Some of those days have been challenging, but Barrett still feels “extremely blessed.”

Many of those challenging days have concerned finances, but shepherding Seton Catholic through the pandemic has taken center stage over the last 10 months.

THE KIDS WILL BE OK

“This takes the cake,” Barrett said. “If somebody had described this to me I would have thought, ‘There’s no way I could have done this.’ For myself — as well as the other principals, whether you’ve done it as long as me or done it for a couple of years — you just really have to buckle down and be resourceful.”

One of her main roles has been cheerleader for the staff, the students and their parents, making certain everyone feels good about the learning that is happening in a variety of ways. The teachers, especially, are stressed about how the children are doing academically, as well as in terms of social-emotional health.

“This is what I know about children — kids are extremely, extremely resilient,” according to Barrett. “If you genuinely care about them and you’re genuinely doing your very best for them, they feel that.”

“I do believe that kids will look back on this time and truly know that we did the very best we could, that we’ve kept their learning moving ahead.”

As “odd and weird” as this year will be for the students, they will never forget it and will talk about it forever, she said.

“I do believe that kids will look back on this time and truly know that we did the very best we could, that we’ve kept their learning moving ahead. I really do believe that with all my heart and I’ve seen that,” Barrett added. “Kids can survive a lot more than we think they can. If we do all those things that we’re supposed to do, it will be OK.”

Barrett has been married to her husband John for 35 years and their three sons can claim Seton Catholic School and Alleman High School as their alma mater, too. She also has 15 nieces and nephews who went through Seton Catholic on her watch.

Working with the parish and community at large, Barrett has been able to bring a pre-kindergarten program for 4-year-olds to the school, as well as a pre-school for 3-year-olds and an extended care program. Seton Catholic has also added computer labs and continues to update technology to provide the best opportunities for the students.

Perhaps one of the most stunning additions came with the leadership of Father Lee — a $3.5 million middle school building that brought the school community together on one campus. Previously those students had been at St. Mary in Moline.

“I don’t know where people would be without faith. Thank God I’m in a Catholic school.”

Through it all she continues to follow the advice of Sister Paula, who told her to have the confidence in herself to do the things she believed in and realize that not all of her decisions were going to be popular.

“But do what’s best for the kids,” she told Barrett, “and stand your ground.”

Barrett has been able to do that with a firm reliance on God.

“I don’t know where people would be without faith,” she said. “Thank God I’m in a Catholic school.”