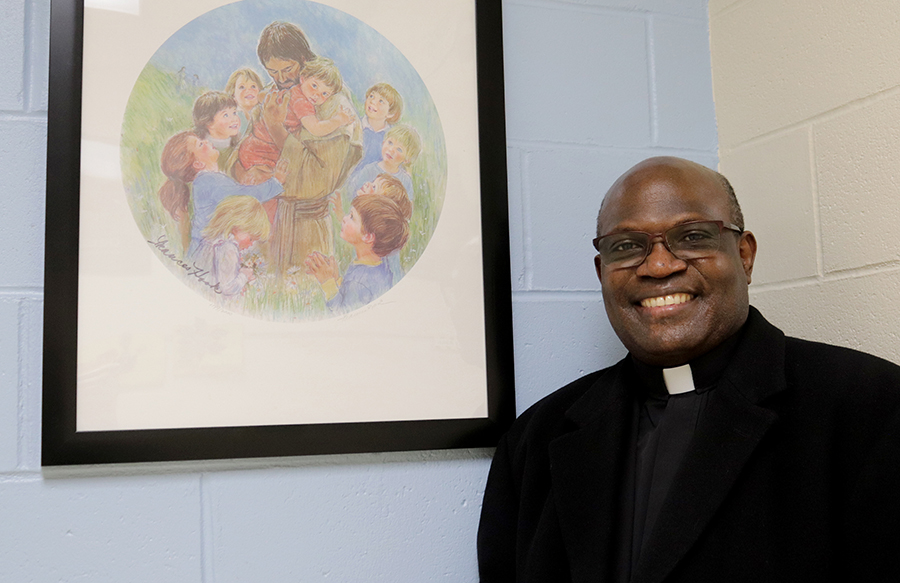 Father Johndamaseni Zilimu, pastor of Saint John Paul II Parish and Visitation Catholic School in Kewanee, stands by a depiction of Jesus outside a classroom at the school. He has been named Distinguished School Pastor of the Year for his work in bringing the children at Visitation closer to Jesus. (The Catholic Post/Jennifer Willems)

KEWANEE — A longtime passion for mathematics has taught Father Johndamaseni Zilimu many things, including the winning equation for life. The only way things add up for him is to put his vocation to the priesthood and ministry to the people of God first and everything else second.

He uses the same formula for guiding Saint John Paul II Parish and Visitation Catholic School in Kewanee, where he is pastor. For him, the school is a vital parish ministry, like the parish council, finance council and RCIA, and an important way to evangelize in the community.

“I don’t see this parish existing without the Catholic school,” he said. “We work very hard.”

That work has been noticed by the Office of Catholic Schools, which named Father John its 2020-2021 Distinguished School Pastor of the Year. He will be honored at a Mass and luncheon with Bishop Daniel R. Jenky, CSC, and Coadjutor Bishop Louis Tylka on Wednesday, May 5. 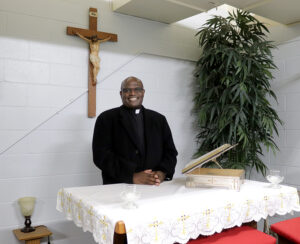 One of the ways Father Zilimu has built up the foundation of faith at Visitation Catholic School in Kewanee is to reclaim a room off of the gymasium to create a chapel, where he celebrates Mass for a different class each Tuesday. (The Catholic Post/Jennifer Willems)

The celebration will include recognition of the 2019-2020 recipients: Msgr. Mark Merdian of St. Pius X and Jordan Catholic School in Rock Island, Distinguished School Pastor of the Year; Dr. Noreen Dillon of St. Mark School in Peoria, Distinguished Principal of the Year; and James Taber of Central Catholic High School in Bloomington, Distinguished Teacher of the Year. The Mass and luncheon last year were canceled due to the COVID-19 restrictions that were in place at the time.

“This is not something I thought I would get. I was very surprised,” Father John said of the award. “I was happy because it means the Office of Catholic Schools recognizes what I am doing here. So naming me the Distinguished Pastor of the Year was something. Wow!”

In her letter to Father John, Dr. Sharon Weiss, superintendent of Catholic schools for the Diocese of Peoria, said she was delighted to confer the honor.

“We are most grateful for the many years that you have given guidance and support to not only our office but also to the school communities and educational apostolates in which you have served,” she said.

Father John said education is so important to him because of his background in Tanzania, where many families are not able to afford it. One of 12 siblings, he has been the only one to earn not only a bachelor’s degree, but a master’s degree and doctorate.

“I see my success right now as a priest is because of my education,” he said, noting that his parents played a role in helping him see how important it was and encouraged him along the way.

“So I have seen the good fruits from education in terms of my own development and helping others,” Father John told The Catholic Post. “When you are educated you get opportunities to help not only yourself but others. You see the needs of others clearly.”

Interested in math from grade school, he was offered a scholarship to pursue his favorite subject at the university after earning high scores on the national exams as he was completing high school. He chose to pursue the priesthood instead.

He studied philosophy for two years at Kibosho Major Seminary, and theology for five years at Kipalapala Seminary, and earned a bachelor’s degree in sacred theology through the Pontifical Urbanian University in Rome in 1995. He would be ordained for the Diocese of Kayanga on Aug. 13 that year.

“If God has something in store for you, you’ll get it. It may come later, but you’ll get it,” Father John said. “I never thought I would continue with math — I thought maybe I was done with it.”

His first appointment for the Diocese of Peoria came in 2009, when he was named parochial vicar at Epiphany in Normal.  He returned to Champaign to serve at St. Matthew in 2010 and added St. Boniface in Seymour in 2012. The following year he went to Kewanee, where he was administrator at St. Mary Parish. Father John has been pastor at Saint John Paul II there since 2014, the same year he was incardinated into the Diocese of Peoria.

“Even though I’m working for this diocese, I’m still helping my people in Tanzania,” he said. 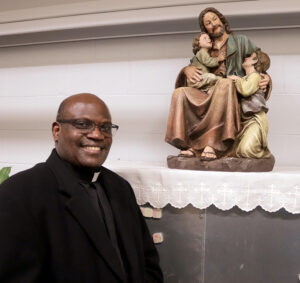 Father Zilimu stands by the statue of Jesus with the children that greets students outside the chapel he instituted at Visitation. He said the children love to look up at it as they enter or leave the chapel. (The Catholic Post/Jennifer Willems)

That is happening through an organization called Children of Hope and Faith, which was founded 16 years ago, during his time in Champaign. Now Kewanee parishioners are also involved in providing financial support, which benefits 160 children in Tanzania.

That includes donations from children in Catholic schools in central Illinois.

“They learn to help. They learn to share. That’s the importance of that,” Father John said. “We have three priests through Children of Hope and Faith. We have nurses. We have teachers. It is very, very comforting.”

Father John is qualified to teach mathematics, too, and did that at Visitation for two years when he first went to Kewanee. With so much on his plate, however, he had to step back and remember what he was ordained to do.

The math and its discipline still comes in handy, helping Father John to organize his thinking. He credits that background for being able to design capital campaigns that would provide the greatest benefits to both church and school.

Building on the school’s faith foundation has included repurposing a room off the gym to create a chapel in 2017. He celebrates Mass for one class each Tuesday, which allows him to speak directly to students on their level rather than the more general homilies required for weekly school Masses.

He said principal Wayne Brau and former principal Sheila Cromien have been good partners and with their combined efforts, “I believe that the kids will be good citizens, people who are responsible. We train the children so they know their education is to help them and help society, the country.”