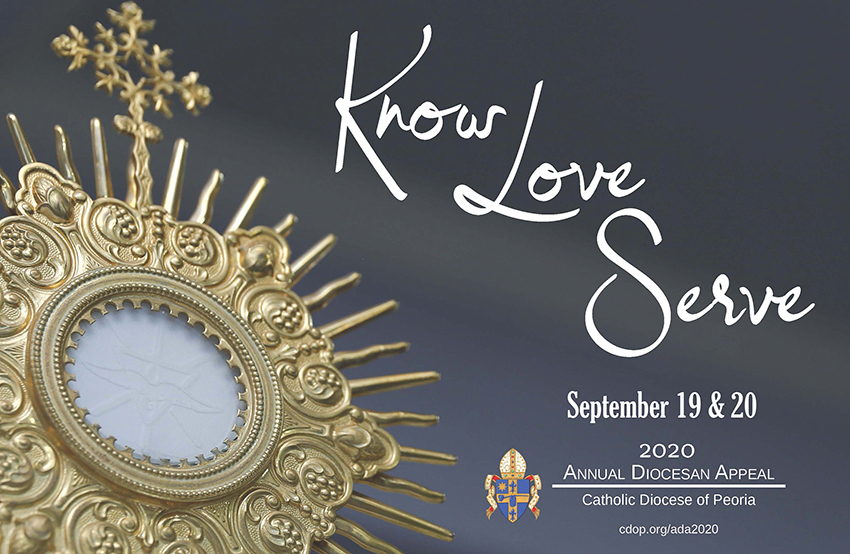 The theme of the 2020 Annual Diocesan Appeal is "Know, Love, Serve." It was conducted primarily through direct mail this year because of the pandemic.

In this most challenging year, Catholics of the Diocese of Peoria are responding generously to a modified Annual Diocesan Appeal that opened in September — six months later than usual and in the middle of a pandemic.

With a goal set at $6 million, pledges have already crossed $5.2 million and more than $4.3 million in payments have been received, according to the diocesan Office of Development and Stewardship.

“The response has been incredible,” said Debbie Benz, director, in expressing gratitude for the sacrificial giving being shown. “It’s going remarkably well.”

Benz said the initial results demonstrate that Catholics realize the difficulties of this year at their parishes and within the diocese and see the appeal as one of the ways they can help.

In a televised news interview last week, Coadjutor Bishop Louis Tylka acknowledged “the very difficult struggles that families are faced with” during this year of pandemic and noted that some parishes are seeing a resulting drop-off in financial support.

The Annual Diocesan Appeal is the major source of funding for the diocese’s programs and ministries. This year’s theme is “Know, Love, Serve.”

The campaign benefits parishes as well as diocesan outreaches, with money collected over parish goals returned in the form of rebates. More than $103,000 already has been returned to parishes as extraordinary income, said Benz.

Acknowledging that this is an “unusual time” because of the COVID-19 pandemic, Bishop Daniel R. Jenky, CSC, this summer lowered the 2020 ADA goal by 11 percent.

In addition to its delayed start, other modifications in 2020 included encouragement for parishes to seek pledges via direct mail rather than in-pew solicitations.

Benz said a spiritual aspect of this year’s campaign is also proving successful. The mailed brochure included an invitation for Catholics of the diocese to send a prayer request for Bishop Jenky or Coadjutor Bishop Louis Tylka to recall during the Masses.

“We’ve gotten hundreds of those back,” said Benz, who said her office sends them on to the bishops.

Contributions to the 2020 Annual Diocesan Appeal continue to be accepted at parishes. An online giving page has been established at cdop.org. Click on the green “Annual Appeal” tab at the top of the page.

With the end of the year nearing, the diocesan Office of Development and Stewardship has made available a list of incentives to maximize charitable gifts.

“As Christians, we recognize everything we have comes from God,” the document begins. “We are called to share these gifts to advance His Kingdom. . . . Through our gifts we demonstrate in a tangible way our love for God and one another.”

Among the incentives described in the document, found online at cdop.org/charitable-giving, are:

From the CARES Act there are two incentives, including

The document also describes a spiritual approach to giving that begins with prayer and gratitude, an assessment of income and giving, goal-setting, and the method of giving that works best for you and the church.

Questions on charitable giving may be addressed at your local parish or by contacting the Office of Development and Stewardship at (309) 671-1550 or development@cdop.org.