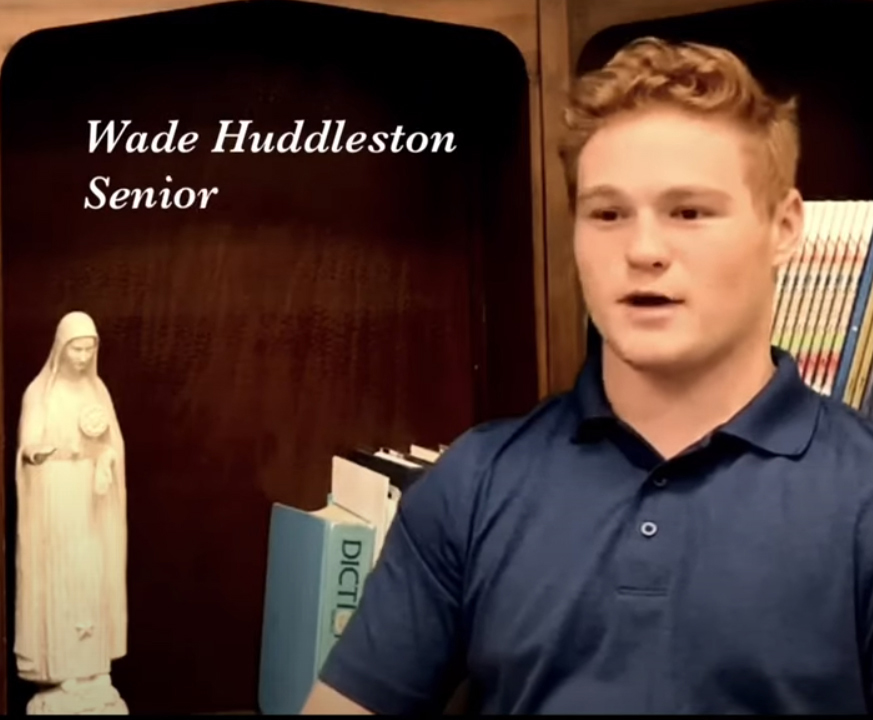 Schlarman Academy Class of 2020 member Wade Huddleston tells how students at the Danville school give back to the community in this screen grab from a student-produced video that won a diocesan contest to promote “Stewardship in Action.” It was later part of a diocesan video that received first place honors from the International Catholic Stewardship Council.

DANVILLE — Video editing is a “fun hobby” for Jack Girouard. But the senior at Schlarman Academy now has an international award on his film resume.

The success began when an entry that Girouard and a few Schlarman friends submitted last school year was named the winner in the Diocese of Peoria’s first video contest among Catholic high schools to help promote “Stewardship in Action” and the 2020 Annual Diocesan Appeal.

The Schlarman entry was then incorporated into a video featuring Bishop Daniel R. Jenky, CSC, that educated young people throughout the diocese about stewardship and the ADA.

In late October, that “Schools ADA Video” earned the Award of Excellence for the best Annual Appeal Video at the annual conference of International Catholic Stewardship Council, held virtually this year.

“This is only the second time that our diocese has been recognized on this international platform,” said Debbie Benz, diocesan director of development and stewardship.

GOING OUT INTO THE COMMUNITY

The Schlarman video focused on the 2020 ADA theme of “Know, Love, Serve” by highlighting how the students put their faith into action throughout the Danville region.

“It is in the classroom where students come to know God and deepen their understanding in the mysteries of our faith,” said student narrator Andy Craig. “From here, students are encouraged to go out into the community and serve as witnesses to their faith and to the mission of Schlarman Academy.”

Examples cited in the video included student and faculty participation in a coat drive, providing for local food pantries, and assisting at a Kiwanis Club pancake breakfast.

“I was really excited and also very surprised when I learned of the video’s success,” Girouard told The Catholic Post this week. He said he created the video on an iPhone 5 in one week with the help of Craig and Joshua Wright. Those interviewed included then-senior Wade Huddleston and current senior Suzet Sermersheim.

STUDENTS “POURED THEIR FAITH” INTO FILM

“I was so happy for the kids,” said Pat Prall, a longtime religion teacher at Schlarman who retired in spring. Prall recalls learning of the diocese-wide contest last fall and asking her Theology III class “Who wants to do this? Who’s good with filming?”

“About five or six in the class automatically shouted out ‘Jack,’” she said of Girouard, who was known for creating short, comedic clips to post for friends on social media. “It was by acclamation that Jack became the filmmaker.”

While Prall provided some input, she said the video was definitely “student driven.”

“I feel there was a lot of their faith poured into that film,” she said. “That’s what touched my heart.”

By winning the diocesan contest, the students earned a pizza party at Bishop Jenky’s residence when COVID-19 restrictions loosen. Prall, the school chaplains and administrators will also be invited.

“I was so impressed by the enthusiasm of the high schools and the students who submitted videos for the contest,” said Benz. While the Children’s ADA had to be postponed this fall because of the pandemic, Benz and Dr. Sharon Weiss — superintendent of schools — hope the educational effort can take place this spring, “if only as an evangelization opportunity.”

The Children’s ADA typically raises around $10,000 in gifts from students. This year’s gifts were to be designated to the John Lancaster Spalding Scholarship Fund to support Catholic school education.

The winning video can be viewed on the Diocese of Peoria’s website, cdop.org. Search for “2020 Annual Diocesan Appeal” and click on the Children’s ADA Video image.

Since the creation of the Schlarman video, Girouard has started to put more time and money into his video production hobby. But he says it will remain a hobby.

“My biggest goal with this hobby is to use it as a force for good, whether it be giving people a good laugh or, more importantly, just spreading a good message to the community,” he said.