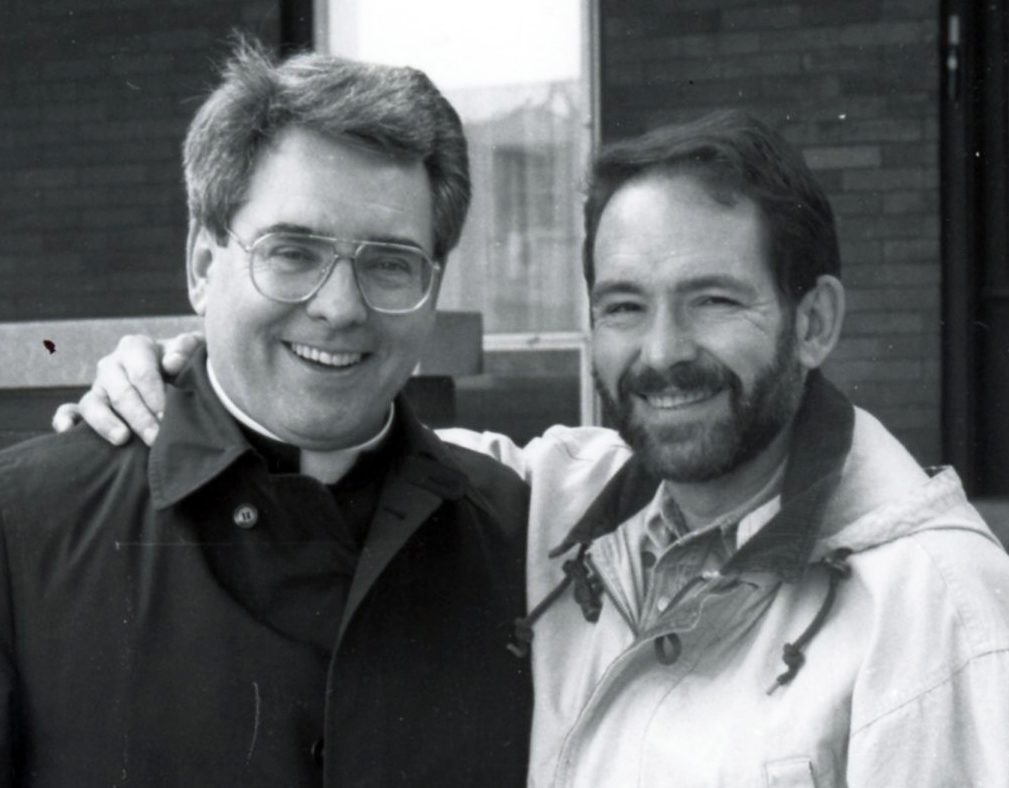 Novelist Gary Wolf, the author of “Who Censored Roger Rabbit?,” is pictured with his lifelong friend, Archbishop John J. Myers, in this 1993 Catholic Post file photo taken when the latter was Bishop of Peoria. Both are natives of Earlville and shared a love of science fiction. They would later co-author a science fiction novel, “Space Vulture.”

EDITOR’S NOTE: The following reflection was submitted for the special edition of The Catholic Post recalling the life and legacy of Archbishop John J. Myers, archbishop emeritus of Newark and former bishop of Peoria, who died on Sept. 24, 2020.

Archbishop John J. Myers was my best friend from forever, and I mean forever. I have memories of John going back to when I first had memories.

We grew up together in the small farm town of Earlville, Illinois. My father owned the town pool hall. John was the son of the town milkman.

We played together as babies. We went to grade school and high school together. We visited each other in college. Eventually, I became a writer. John became a priest, a bishop and an archbishop. We still got together all the time. John was always a part of my life.

During our entire relationship, John never changed. He was the same cheerful, witty, amiable guy as an archbishop as he was in grade school when we played together on the swings. Or in high school where we would take the train to Chicago, see one of those incredible, big screen, Cinerama movies, and then go to dinner at a fancy restaurant. Where once, we both ordered swordfish and were both greatly disappointed that the fish came without a sword. Two bumpkins in the city!

After high school, when childhood friendships often fade away, ours grew stronger.

When I went away to war, John, by now a priest, gave me a hug at the door to the bus that took me to the airplane that flew me to Vietnam. When I came home two years later, he was the first person I saw when I came through the airport gate.

John visited me in San Francisco while I was writing “Who Censored Roger Rabbit?” John chimed in, as always, with an opinion on my work. He told me Roger should be less Bugs Bunny, malicious prankster, and more Mickey Mouse, loveable scamp. He was right. I took his suggestions, and my book became instantly better. That was John being John.

During our entire relationship, John never changed. He was the same cheerful, witty, amiable guy as an archbishop as he was in grade school when we played together on the swings.

John knew many famous, powerful, and influential people. Far more than I did. Still, he never let his achievements or his status go to his head. He took as much pride in taking me and my wife Bonnie to his favorite neighborhood pizza place in Rome as he did in introducing me to the Pope.

In grade school, we were both big readers. I read mostly adventure stories, John read the classics. We both loved science. In the seventh grade John gave me a book entitled “Space Hawk.” “You have to read this,” he said. “It’s science, but it’s fiction! It’s science fiction!” We had never heard of this strange science fiction stuff before. I read the book and was every bit as enthralled as John had been.

Fifty years after reading “Space Hawk,” John and I could still quote verbatim passages from the text. Want an example? How about this: “The Vesuvian quivered, his face still contorted with his last desperate emotion. Then he sagged to the deck. His body twitched and rolled over in a spasm. Almost square between his eyes was a crisp, smooth-burned hole. The air reeked from the smoky stench of charred flesh.”

We went to the town librarian and asked her if she could get us more of this science fiction. Which she did. We read Asimov, Heinlein, Ellison, Bradbury, the towering giants. Both of us continued to read science fiction. I started to write it, too.

One day one of us (we always argued over who) suggested that we co-write an homage to “Space Hawk.” Thus, did I spend two of the happiest years of my life, writing a science fiction novel with my best friend. The result, “Space Vulture,” was ranked by The New York Times as one of the ten best pulp science fiction novels of all time.

Now he’s gone. A part of my childhood, a huge part of my life has disappeared.

I will always remember my friend John Myers as the kind, giving, funny, personable, bright, and generous man who rose from his humble beginnings to achieve a multitude of impossible dreams.

I will miss him forever.