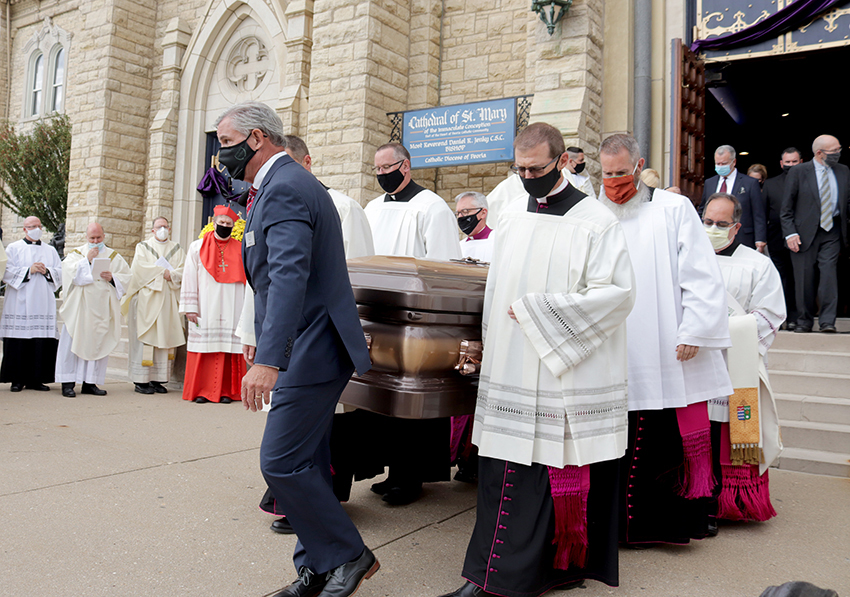 Archbishop John J. Myers leaves St. Mary's Cathedral in Peoria for the last time Sept. 30 as his casket is carried to the hearse that will take him to the Bishops' Mausoleum at St. Mary's Cemetery in West Peoria. Archbishop Myers, the Archbishop Emeritus of Newark and a former Bishop of Peoria, died Sept. 24 at the age of 79. Serving as pallbearers were six of his former administrative assistants in Peoria and Newark. (The Catholic Post/Jennifer Willems)

Archbishop John J. Myers was recalled as a man of faith, prayer, a scholar, a teacher, and as “a really good bishop” during a Solemn Requiem Mass at St. Mary’s Cathedral in Peoria on Wednesday, Sept. 30.

The Archbishop Emeritus of Newark and former Bishop of Peoria was interred in the Bishop’s Mausoleum at St. Mary’s Cemetery in West Peoria following a funeral liturgy attended by family members of the Earlville native, representatives of several communities of religious women, and nearly 100 clergy, including Cardinal Joseph W. Tobin of Newark and eight other visiting bishops. The Mass was livestreamed on the Diocese of Peoria’s website and is archived on its Facebook page. 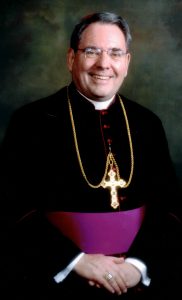 Bishop Daniel R. Jenky, CSC, was principal celebrant of the Requiem Mass. In opening remarks, he welcomed Cardinal Tobin — who succeeded Archbishop Myers in Newark following his retirement in 2016 — as well as a delegation of priests from the Newark Archdiocese.

Turning to the family of Archbishop Myers, seated in the front pews to his right, Bishop Jenky said “we share your sorrow, but most of all we share your faith in Christ’s victory over death.” He promised continuing prayers for their consolation.

“A MAN OF FAITH AND PRAYER”

The homilist was Msgr. Steven P. Rohlfs, rector emeritus of Mount St. Mary’s Seminary in Emmitsburg, Maryland, and a longtime friend of Archbishop Myers. (See the full text of the homily here.)

Msgr. Rohlfs, who served the Diocese of Peoria in several leadership roles during Bishop Myers’ 11 years as diocesan bishop, including as vicar general, said the archbishop had “all of the qualities necessary to be a good bishop.” He called him “a man of faith and prayer, honest, fair, merciful, just, tolerant, funny, discreet, a good mentor, teacher and example.”

Vowing not to use superlatives that are often part of recalling the recently deceased, Msgr. Rohlfs drew laughter when he answered “No” to the self-posed question if he thought Archbishop Myers was “the best bishop.”

“I don’t think any of us have ever met ‘the best bishop,” Msgr. Rohlfs said, drawing more laughter as he turned to Cardinal Tobin, Bishop Jenky, and other bishops present — including Coadjutor Bishop Louis Tylka — and ad libbed “No offense.” 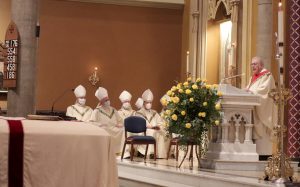 Msgr. Steven P. Rohlfs, PA, who was vicar general to Archbishop Emeritus John J. Myers when he was bishop of Peoria, was the homilist for the Solemn Requiem Mass on Sept. 30. His memories offered a humorous and touching look at how Archbishop Myers loved his priests and the church. (The Catholic Post/Jennifer Willems)

“No matter what role the Archbishop played in each of our lives, all of us could probably say the same thing: He was really pretty good.”

Msgr. Rohlfs shared three humorous, yet poignant, personal stories about Archbishop Myers, including one that illustrated how “he always had the care of the priests in his heart,” said Msgr. Rohlfs, his voice cracking with emotion.

He mainly spoke of Archbishop Myers in the present tense, because “he is still very much alive and existing in eternity,” and ended his homily by detailing three things the archbishop would want to say now to those gathered if he had the chance. He summarized them as:

Accompanying Archbishop Myers’ casket as pallbearers were five priests who served as his administrative assistants in Peoria — Msgr. Stuart Swetland, Msgr. Eric Powell, Msgr. Mark Merdian, Msgr. Jason Gray, and Father Joseph Donton — as well as Msgr. Michael Andreano, vicar general of the Archdiocese of Newark. The casket was draped with a pall featuring an image of Archbishop Myers’ coat of arms. Placed atop was a Book of the Gospels that was a gift from the seminarians of the Diocese of Peoria when Father Myers was consecrated coadjutor bishop of Peoria. 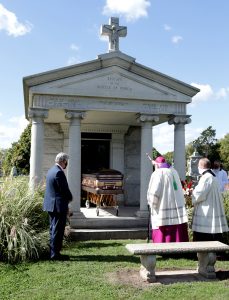 As the casket of Archbishop Emeritus John J. Myers rests before the doors of the crypt of the bishops of the Diocese of Peoria at St. Mary’s Cemetery in West Peoria, Bishop Daniel R. Jenky, CSC, blesses and sprinkles it one last time. Before Archbishop Myers’ family left, they gathered around the casket and sang “When Irish Eyes Are Smiling,” a family favorite. (The Catholic Post/Jennifer Willems)

Four nieces of Archbishop Myers had roles in the liturgy. Kathryn Niemerg and Zoe Myers gave Scripture readings, while Maribeth Hoffman and Denise Gould led the Prayers of the Faithful.

Those intentions were each prefaced by a corresponding trait of Archbishop Myers. For example, they noted his devotion to the Eucharist, his promotion of vocations to the priesthood and religious life, how he “walked with the church in its suffering after Sept. 11,” and his concern for universities, seminaries, Catholic health care and medical ethics before adding specific related prayers for each of those subjects.

Three large sprays of yellow roses — among Archbishop Myers’ favorites — were placed in the cathedral.

Music for the Mass ranged from the opening procession’s solemn “Requiem aeternam,” chanted from the choir loft by T. Nicholas Haggin, to the post-Communion hymn “O God, Beyond All Praising,” robustly sung by the assembly and backed by cathedral organist Jon Kroepel along with brass and timpani.

EDITOR’S NOTE — More photos from the funeral and interment, as well as a video of the clergy from Peoria and Newark singing the “Salve Regina” as the casket of Archbishop Myers left the cathedral, can be found on The Catholic Post’s Facebook page.