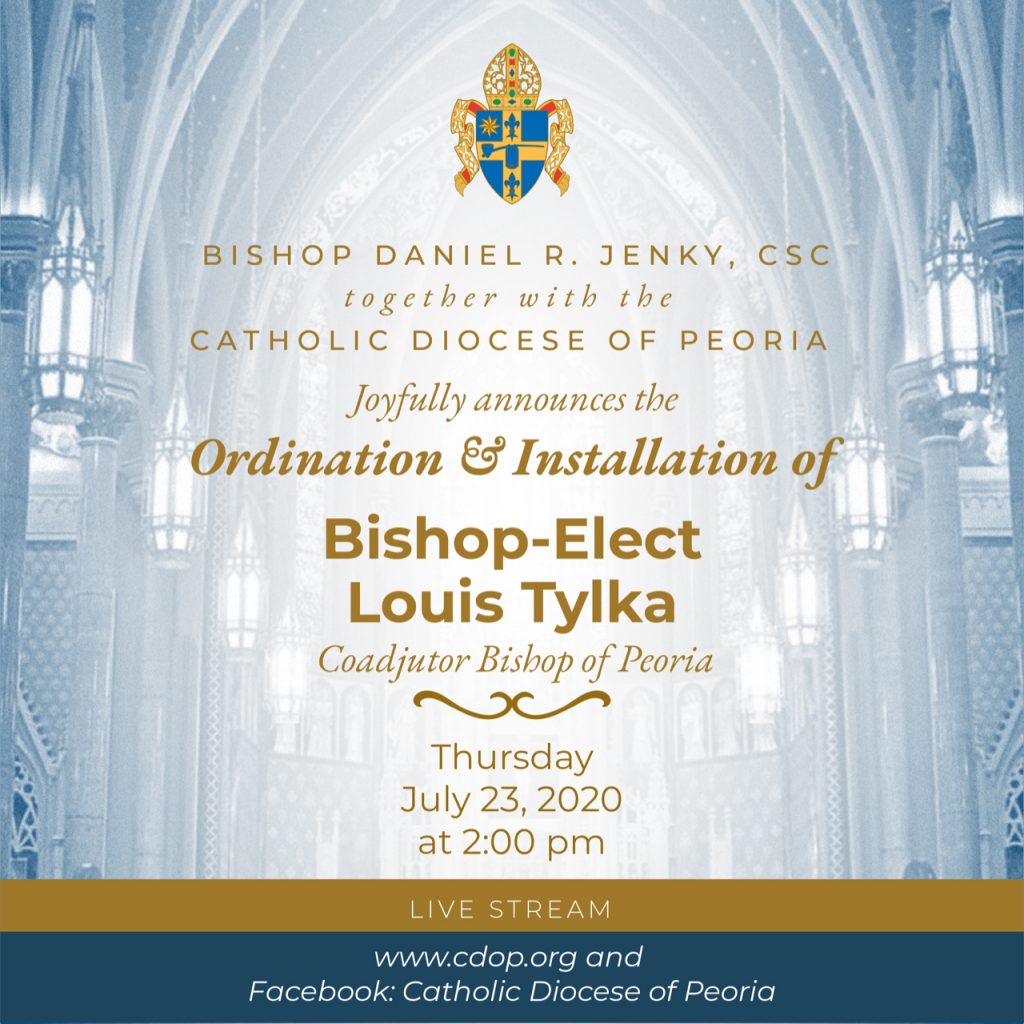 This invitation to view the July 23 livestream of Coadjutor Bishop-elect Louis Tylka’s episcopal ordination Mass is being shared across social media.

While acknowledging it is “unfortunate” that attendance at the episcopal ordination of Coadjutor Bishop-elect Louis Tylka will be limited on July 23 because of coronavirus pandemic guidelines, Msgr. Jason Gray takes the optimistic view.

Because the Mass will be livestreamed on the Diocese of Peoria’s website (cdop.org) and Facebook page, he said, “in a certain sense we can say the entire diocese is invited — everyone is invited.”

“We want everyone to know they can share in the moment,” said Msgr. Gray, who chairs a 10-member committee overseeing details surrounding the ordination. The Mass begins at 2 p.m. on Thursday, July 23, and more details regarding the liturgy are found here.

Current state guidelines restrict attendance to 25 percent of the cathedral’s capacity, or about 250 guests.

“That’s a really tough number,” said Msgr. Gray, “because obviously there are a lot of people who would want to come. It’s going to very severely limit what we’re able to do. That part is unfortunate.”

But what is fortunate is the livestreaming experience Catholic parishes — including the cathedral parish — have gained in recent months when public Masses had to be canceled.

“We’ve all had to get used to watching Mass on video,” said Msgr. Gray.

Fortunate, too, is that among the experts in the Diocese of Peoria in video and social media is a priest now serving at the cathedral parish — Father Julio Faes. Father Julio utilized new communications technology while serving in Argentina and has broadened his scope in recent months while assisting with Hispanic ministry in the Peoria region.

For the ordination Mass, Father Julio will be seated in a front, side pew. He will control three strategically placed cameras with his iPhone, while transitions and audio will be handled on his laptop computer.

Seated next to him will be “co-producer” Rosie Romero, director of Hispanic Ministry for the Diocese of Peoria and a member of the ordination planning committee.

She called social media “a ministry inside of a ministry” for Father Julio, who speaks limited English but has a great understanding of the new technology and has followers not only in Argentina, but in Mexico and growing numbers in the Diocese of Peoria. In addition to livestreaming Masses from the cathedral, Father Julio has given online retreats and broadcasts devotions, including the rosary and adoration of the Blessed Sacrament.

“We tried a lot of different things,” said Romero, including unobtrusive placements of cameras behind flowers or high on pillars.

“The liturgy is beautiful in general, but even more this one will be so special we don’t want distractions for the people,” she said.

To ensure uninterrupted internet connection, a special line devoted to the streaming has been arranged. A new cable has been purchased that plugs directly into the cathedral’s sound system.

“I think we have the best sound we can get,” said Romero.

While about 2,500 people have viewed the diaconate ordination Mass, Romero expects that number to at least double for the Bishop Tylka ordination as people from the Archdiocese of Chicago join viewers from across the Diocese of Peoria.

“We wish everyone could be there in person, but everyone will be able to see it online,” said Msgr. Gray.

The episcopal ordination planning committee was drawn largely from the diocesan curia. Other members and their areas of focus include Patricia Gibson, Director of the Curia, as vice chair; Father Alex Millar and Phil Lee (liturgy); Cheryl Berkshier and Laurie Ullrich (Bishop’s Office); Debbie Benz (logistics and media); Tom Dermody (The Catholic Post); and Andrew Hagemann (security and transportation).

Msgr. Gray, pastor of St. Thomas the Apostle Parish in Peoria Heights, served as vice chair of the committee that oversaw details of the installation of Bishop Daniel R. Jenky, CSC, when he arrived in the Diocese of Peoria 18 years ago.

Because of the pandemic, there are fewer details for the committee to help plan this time. For example, there will be no reception.

“We’d like to have a reception, but it’s not possible under the circumstances,” said Msgr. Gray.

There will be fewer bishops present because of travel concerns, and fewer hotel rooms required because many of Bishop Tylka’s guests are coming from just a few hours away.

“In some ways it’s sad we can’t do more,” said Msgr. Gray. But again looking on the bright side, he said that if the ordination was scheduled for April or May “I’m not sure we could have had 20 people for it.”

“Even if we had a full cathedral of 1,000 people it wouldn’t be enough for all the people who would want to be there,” he admitted. Msgr. Gray pointed out that Bishop Tylka will celebrate Masses of Thanksgiving across the diocese in the weeks following the ordination and greet the faithful at receptions following them.