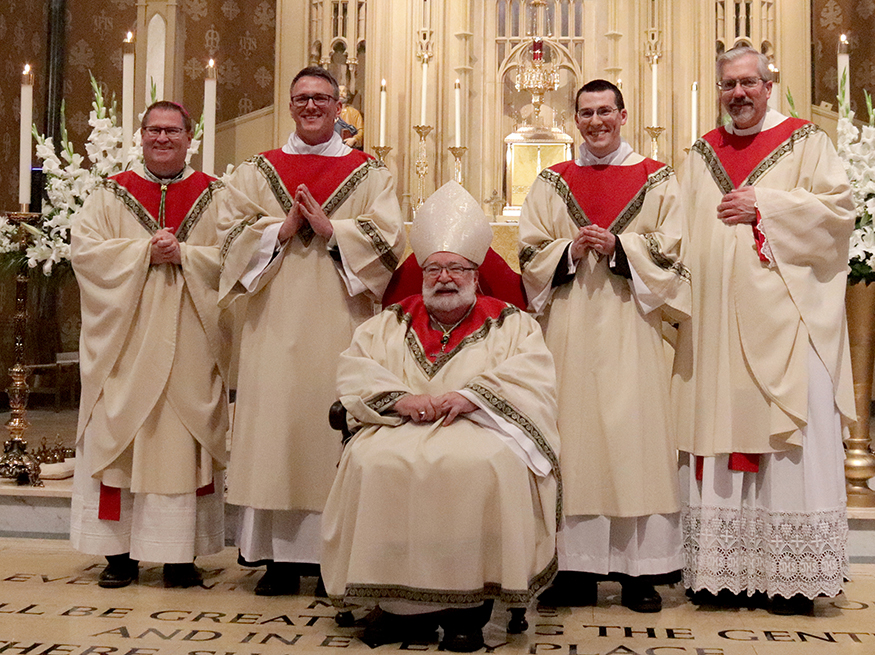 Proclaiming it “a very happy day for our diocese,” Bishop Daniel R. Jenky, CSC, ordained seminarians Austin Bosse and Nicolas Wilson as transitional deacons during the first public Sunday liturgy in St. Mary’s Cathedral since the start of coronavirus pandemic restrictions in mid-March.

“It’s good to be together,” said the bishop in welcoming remarks as he looked out over an assembly of socially distanced family members and friends of the deacon candidates. Nearly all in the assembly wore masks, as did the priests, deacons, seminarians, and servers taking part in the opening procession. 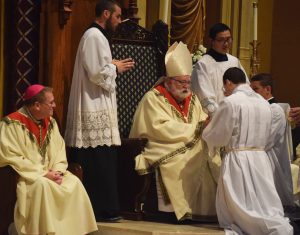 Transitional deacon candidate Nicolas Wilson pledges obedience to Bishop Jenky and his successors during the Rite of Ordination. Looking on is Coadjutor Bishop-elect Louis Tylka. (The Catholic Post/Tom Dermody)

Celebrated on the Solemnity of the Most Holy Body and Blood of Christ, the gathering had another reason for great joy. Seated to Bishop Jenky’s right was Coadjutor Bishop-elect Louis Tylka, a priest of the Archdiocese of Chicago who will be ordained to the episcopacy at the cathedral on July 23. Bishop-elect Tylka will first assist Bishop Jenky and then succeed the bishop upon his retirement.

“He will be sitting in this chair in a year and half, and God knows I need all the help I can get,” said Bishop Jenky with a smile. He then encouraged the assembly “Let’s welcome Bishop Lou” and the cathedral was filled with sustained applause. Bishop-elect Tylka soon deflected the applause to the deacon candidates, who stood near their parents in the front pew.

The first major public liturgy at the cathedral since the pandemic shutdown included some special directives. Absent was the traditional Knights of Columbus Fourth Degree Honor Guard. There was no offertory procession, and traditional embraces of peace for the newly ordained deacons were replaced with a wave of a hand or a bow. Communion was distributed to the assembly following Mass, with the newly ordained then greeting family and friends outside in a grassy area across Madison Avenue from the cathedral’s entrance.

But much was also familiar, including the ancient rites of ordination that featured the presentation of the candidates by Father Patrick Henehan, diocesan vocation director of formation; a series of promises made by the candidates to Bishop Jenky and his successors; the candidates prostrating themselves on the cathedral sanctuary floor as the assembly sang the Litany of the Saints; and Bishop Jenky laying his hands upon the candidates’ heads prior to the prayer of consecration. 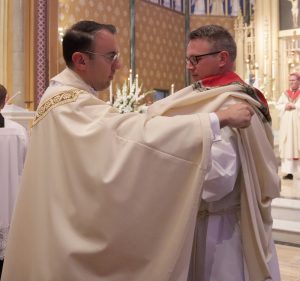 Father Robert Lampitt, chaplain of St. John’s Catholic Newman Center in Champaign, assists Deacon Austin Bosse with his vestments near the close of the Rite of Ordination. (The Catholic Post/Jennifer Willems)

The new deacons were then assisted with their vestments. Assisting Deacon Bosse was Father Robert Lampitt, chaplain of St. John’s Catholic Newman Center in Champaign, while assisting Deacon Wilson was Father Paul Carlson, pastor of the LaSalle Catholic Parishes.

In a brief homily, Bishop Jenky outlined some of the duties of the order of deacons, including assisting priests at the altar, proclaiming the Gospel, distributing the Eucharist, and administering baptism or conducting funeral rites.

“Do the will of God from the heart, serve the people in love and joy as you would the Lord,” Bishop Jenky told the new deacons.

The two new deacons will serve at parishes in the diocese this summer before returning to Mount St. Mary’s Seminary in Emmitsburg, Maryland, for their final year of preparation for the priesthood. 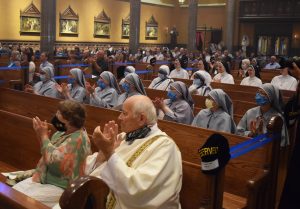 The assembly responds with applause after Austin Bosse and Nicolas Wilson were accepted for the Order of the Diaconate. In the foreground are Deacon Roger and Linda Hunter of St. Jude Parish, Peoria. (The Catholic Post/Tom Dermody)

Deacon Bosse, a Kansas native and the son of Armon Jr. and Rosie Bosse, has been assigned to St. Thomas the Apostle Parish in Peoria Heights for the remainder of the summer. Deacon Wilson, the son of Richard and Lori Wilson of Dunlap, will serve this summer at St. Mary Parish in Pontiac.

About 20 priests were present for the Sunday morning Mass of Ordination, which was livestreamed on the diocesan website and on the Facebook page of the Office of Priestly Vocations, where it has been archived for later viewing.

Proclaiming the first and second readings were diocesan seminarians Nathan Hopper and Daniel Dionesotes. The Gospel was read by Deacon Robb Caputo of St. Michael the Archangel Parish in Streator and Sts. Peter and Paul, Leonore.

EDITOR’S NOTE: Several more photos from the Mass for the Ordination of Deacons have been posted to The Catholic Post’s site on Facebook.