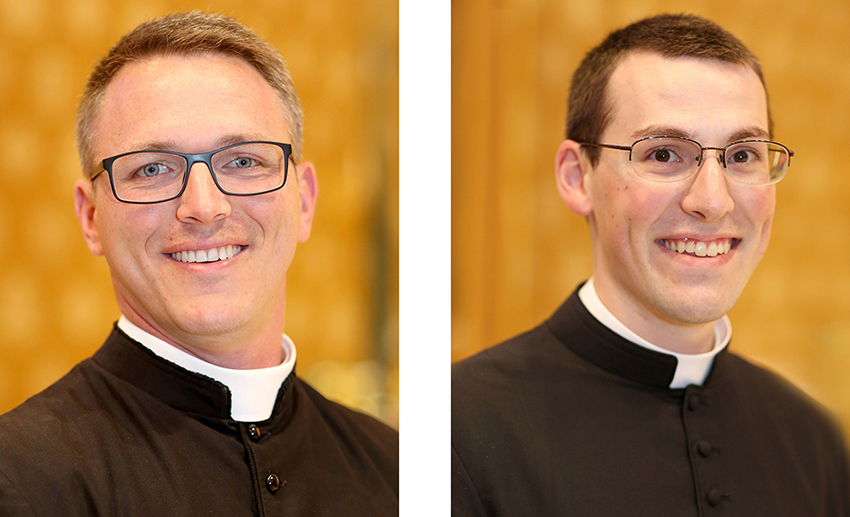 Diocese of Peoria seminarians Austin Bosse, left, and Nicolas Wilson had anticipated being ordained as transitional deacons on May 17. The ordination, delayed due to the COVID-19 pandemic, will now take place June 14.

Details are still being worked out, but one thing is certain: seminarians Austin Bosse and Nic Wilson will be ordained transitional deacons for the Diocese of Peoria on Sunday, June 14.

Bishop Daniel R. Jenky, CSC, will preside at the 10:30 a.m. Mass at St. Mary’s Cathedral in Peoria. There is no word yet on how many people will be able to attend, but a livestreamed liturgy is possible.

The ordination, which was originally planned for May 17, had to be postponed when public Masses were suspended to protect people from the COVID-19 pandemic. The new date was announced on May 21, after The Catholic Post had gone to press.

Father Patrick Henehan, vocation director for formation for the Diocese of Peoria, said he told Wilson and Bosse that he didn’t know what the day would look like or how many people could come, but they wanted to move forward with ordination.

“They’re both exceptional candidates for the diaconate — and the priesthood.” Father Patrick Henehan, vocation director for formation

“It shows how excited they are and how committed they are to the church and to the diocese,” he told The Catholic Post.

“To give our people even that hope in the midst of all the difficulty is a great gift,” Father Henehan said.

Bosse and Wilson will be known as transitional deacons because they will continue their studies at Mount St. Mary’s Seminary in Emmitsburg, Maryland, as they journey to priestly ordination next May “if it is God’s will.”

“They’re both exceptional candidates for the diaconate — and the priesthood,” Father Henehan said, noting they have different gifts but similar loves. Among them are a love for the church, a love for the Eucharist, a love for Mary, and a love for the people of central Illinois.

The seminarians have had plenty of time to foster that love since returning to the Diocese of Peoria in mid-March to shelter in place. While completing their seminary studies for the semester, Bosse has been living at St. Matthew in Champaign and Wilson has been with the priests of the LaSalle Catholic Community.

Both admitted to being disappointed when their ordination had to be postponed, but said they had faith in God’s timing.

“We have what we think life should be like and the way we think the world should operate, but it turns out that God sees things in a totally different way and has plans that are outside of our expectations and beyond our expectations,” Bosse said. “If we are willing to cooperate with them, then he will pour out an abundance of blessings upon us, an abundance of graces, and draw us into deeper relationship with him.”

Bosse grew up in Onaga, Kansas, a town of 700 people about an hour north and west of Topeka. His father, J.R., has the local feedlot and his mother, Rosie, is the author of two novels and a series of popular children’s books.

“We have what we think life should be like and the way we think the world should operate, but it turns out that God sees things in a totally different way and has plans that are outside of our expectations and beyond our expectations.” –– Austin Bosse

While he always went to church with his family, Austin Bosse couldn’t see himself as a priest. He earned a degree in bakery science from Kansas State University and started climbing the corporate ladder at Frito-Lay.

It was his sister who encouraged him to pray the rosary on the one-hour commute to work and then suggested he go to daily Mass to handle the stress of his job. He found peace there, which caused him to look at his life. That became important after a moment of personal crisis and the end of a serious relationship. 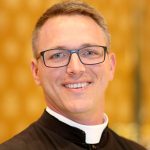 Working as a corn handling operations manager in Sidney and living in Champaign, he became active at St. Matthew Church. He had started to hear God calling him to the priesthood but resisted it until he went to Emmaus Days, a summer discernment program offered by the Diocese of Peoria.

“I finally realized I was arguing with God and it was not going to go well,” Bosse said.

When he told his story to Msgr. Brian Brownsey, then the director of vocations for the Diocese of Peoria, the priest said, “You know you have a vocation, right?”

Accepting that brought an overwhelming sense of peace and Bosse knew he had found what he was looking for.

He called to tell his grandmother and before he could say anything she asked if he was calling to tell her was going to be a priest. It turns out she had been praying for it the whole time.

“We are far too big a family not to have a priest in the family,” said the 97-year-old woman who went to Mass and prayed the rosary daily.

Bosse was accepted as a seminarian by the Diocese of Peoria and started at Mount St. Mary’s Seminary in 2015.

In the priests of the Diocese of Peoria he has found holy men who are brothers. While they may razz each other, as brothers will do, “they love each other and will work and lay down their lives for each other and for their people,” he said.

Born in Chillicothe, Nic Wilson attended St. Edward Church with his parents, Richard and Lori Wilson, and younger brother, Ben, until he was in the first grade. That’s when the family moved to Dunlap and switched to St. Jude Parish, which he considers his home parish.

There was no school at St. Jude then, so Wilson went to St. Mary in Kickapoo and then Peoria Notre Dame, graduating in 2013. 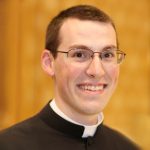 He started feeling the stirrings of a priest vocation as an altar server at St. Jude and the call grew stronger as he got involved at Peoria Notre Dame and St. Mary’s Cathedral. With his heart set on going to the seminary, he applied to the Diocese of Peoria and went to Immaculate Heart of Mary Seminary at Saint Mary’s University of Minnesota.

Wilson graduated with a degree in philosophy in 2017 and then began working on his master’s of divinity degree with a concentration in systematic theology at Mount St. Mary’s Seminary.

He spent his first two summers as a seminarian working in the archives of the diocese and said it was a wonderful experience.

He also spent two summers working with Totus Tuus, a summer faith formation program for children and teens. This experience gave him an appreciation for the breadth of the diocese and taught him about leadership.

His summers with Msgr. Thomas Mack at Immaculate Conception in Monmouth and St. Patrick in Raritan, and Msgr. Mark Merdian at St. Pius X in Rock Island allowed him to observe and learn from seasoned priests. He spent last summer in a Spanish immersion program in Guatemala.

Wilson looks forward to seeing his classmates ordained to the diaconate this summer and joining them in ministry.