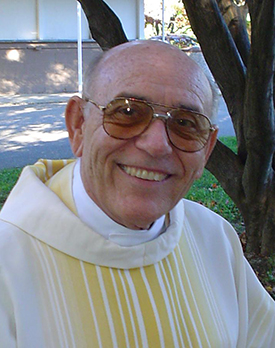 BELLE GLADE, Florida — A Requiem Mass will be celebrated at 11 a.m. on Thursday, May 21, at St. Philip Benizi Church here for Father Joseph Santa Bibiana Gisbert, SDB, former parochial vicar of Holy Cross Parish in Champaign and superior of the Salesian community there.

Father Santa died on May 15, 2020, at Wellington Regional Medical Center in Wellington, Florida. He was 87, and had been a professed Salesian for more than 63 years.

Bishop Gerald Barbarito of Palm Beach is the scheduled principal celebrant of the Requiem Mass, which will be livestreamed on the Facebook page of St. Philip Benizi Parish.

Born in Valencia, Spain, on April 25, 1933, to José Santa Bibiana and Josefina Gisbert, he attended public schools but also the local Salesian youth center, where he was impressed by members of the religious community.

He entered the candidacy program in August 1954 at Mataró (Barcelona) and was admitted to the novitiate a year later. Brother Santa made his first profession of vows on Aug. 16, 1956, then came to the U.S. and began philosophical (and language) studies at Don Bosco College in Newton, N.J., earning a bachelor of arts degree in 1959. He would later receive a master’s degree in education from St. John’s University in New York. 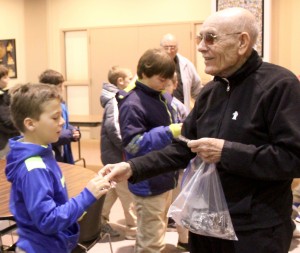 Father Joseph Santa Bibiana, SDB, hands out keychains with an image of St. John Bosco after a vocations presentation in early 2016 for students from Holy Cross School, Champaign. (The Catholic Post/Jennifer Willems)

Brother Santa did his three years of practical training at the Salesian middle school in Tampa, Mary Help of Christians, and made his perpetual profession in 1962. He then began theological studies at Salamanca, Spain, where he was ordained on March 6, 1966.

During his nearly 54 years of priestly life he served as a campus minister and principal in Tampa; a principal in East Boston; and taught at a technical high school in Paterson, N.J.

In 1980, the Salesians assumed pastoral care of St. Philip Benizi Church in Belle Glade, Florida, and Father Santa became its first Salesian pastor. He would also serve as pastor of St. Mary Parish in Pahokee, Florida; St. Anthony Parish in Paterson, N.J.; and as treasurer of the Salesians’ New Rochelle Province.

When the Salesians in 2013 accepted an invitation to take parochial and campus ministry responsibilities in Champaign, the province tapped Father Santa to be director of the three-man community there. He would serve as parochial vicar at Holy Cross Parish and pastoral minister to the local Hispanic community, particularly in Rantoul.

On the occasion of his 50th anniversary of ordination in 2016, he told The Catholic Post: “I thank God that wherever I’ve been, I’ve been happy. I enjoy the people, especially the young people in schools. You give yourself to them. The joy is knowing that through you God gets to them. You bring God alive through your dedication to them.”

In 2016, he returned to Belle Glade as parochial vicar of his former parish. Early last year he was diagnosed with pancreatic cancer, but continued helping when he could at the parish.

Father Santa is survived by two nieces in Spain. In lieu of flowers, memorial donations may be made to St. Philip Benizi Parish in Belle Glade.