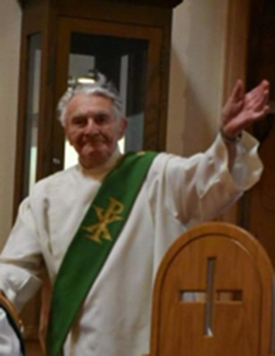 PEKIN — A graveside service is scheduled for 11 a.m. on Saturday, March 21, at St. Joseph Catholic Cemetery here for Deacon Charles “Chuck” Murray, who served St. Joseph Parish as a permanent deacon for 27 years until his move to senior status in 2015.

At a Mass live-streamed on the St. Joseph Parish website on March 14, Father Michael Andrejek, pastor, recalled Deacon Murray as “a faithful servant of Christ and of his brothers and sisters.”

Deacon Murray presides at a baptism in 2013. (The Catholic Post file/Jennifer Willems)

“Deacon Murray was someone who truly followed Christ and a deacon who served others and loved them dearly,” said Father Andrejek, who will preside at graveside service.

A memorial Mass will be celebrated at a later date as all public Masses in the Diocese of Peoria are now suspended as a coronavirus precaution.

Born Aug. 12, 1920, in New Castle, Pennsylvania to Phillip and Anna Kiernan Murray, he served in the U.S. Army as a transport medic and crossed the ocean 24 times. He later worked for Corn Products, retiring in 1982.

He was among 15 members of the Diocese of Peoria’s fourth class of permanent deacons ordained on May 21, 1988, at St. Mary’s Cathedral in Peoria.

In a 2013 interview with The Catholic Post on the occasion of his 25th anniversary of ordination, Deacon Murray said his time spent with inmates at the Federal Correctional Institution in Pekin was one of the greatest joys of his diaconal ministry. He accompanied more than 100 of them during their faith formation journey and reception into the Catholic Church.

“I look forward to going to the nursing homes and the prison,” he said. “When I go, I figure this may be the only visitor this person has had all week or all month.”

Deacon Murray received the Pere Marquette Award, the highest recognition given by the Diocese of Peoria, in 2000. Seven years later, he was honored with the Pro Ecclesia et Pontifice Medal from Pope Benedict XVI.

Deacon Murray was a Third and Fourth Degree member of the Knights of Columbus, Archbishop Schlarman Council No. 3507 — of which he was a charter member. He was also a member of the St. Vincent de Paul Society in Pekin.

He is survived by a daughter, Maryann (Michael) Blanchard; a son, George Murray; nine grandchildren; 16 great-grandchildren; a son-in-law, Joseph Baumann; a sister, Gertrude Blight; and several nieces and nephews.

In addition to his wife, Deacon Murray was preceded in death by two daughters, Patricia Baumann and Kathy Whais; five sisters and three brothers.

Memorials may be made to St. Joseph Catholic School or to the St. Vincent de Paul Society. Online condolences may be offered at abtsmortuary.com.