St. Philomena teacher to be consecrated to Order of Virgins at cathedral Dec. 8 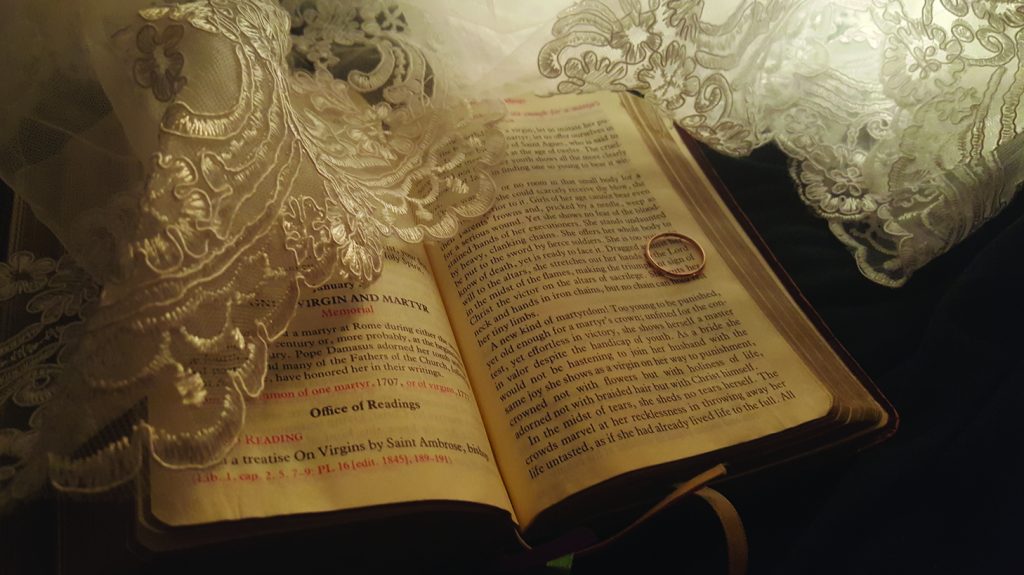 The symbols of a vocation to consecrated virginity include a wedding veil and ring, to signify the spousal relationship between the consecrated virgin and the Lord, and the Liturgy of the Hours so that she can enter in the prayer of the church. (Provided photo by Taryn Watkins)

Taryn Watkins can’t wait to share what God has been doing in her life.

She will do that on Sunday, Dec. 8, when she is consecrated to the Order of Virgins by Bishop Daniel R. Jenky, CSC. The ritual will take place during the 10:30 a.m. Mass at St. Mary’s Cathedral in Peoria.

“The process of discernment for consecrated virginity has been long. I’ve been discerning consecrated life or religious life for 12 or 13 years,” said Watkins, who has taught art at St. Philomena School in Peoria for three years. “I think the Lord wanted to show me little by little.”

The daughter of Deanna and Philip Watkins, Taryn grew up in Sycamore, near DeKalb. Studying for a bachelor’s degree in fine art with a concentration in painting at Illinois State University, she discovered a passion for prayer, as well as a peace in the Lord’s presence she had never felt before as she got involved in the St. John Paul II Catholic Newman Center. 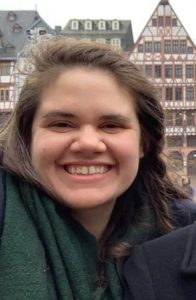 She would go on to enter a Carmelite monastery, but left when she discerned that God was calling to her to something else. She moved to LaSalle to live a contemplative life and pray, while doing some art to support herself.

“Probably a couple years after I left Carmel, I still felt called to consecrated life in some form, but I didn’t know if that was in another religious order or what that was going to look like,” she told The Catholic Post.

On the advice of a priest she made a retreat with a religious community in Wisconsin. While she liked them, it became clear that God wasn’t calling her to a religious community. “But that desire to be consecrated, to belong only to the Lord was still there,” Watkins said.

The vocation fell out of use once religious orders became more popular and didn’t really emerge again until the 1970s.

“So it’s a very ancient vocation, but it’s also a very new vocation,” Watkins said, which is why people may not be very familiar with it. “I hadn’t heard about it and I was discerning religious life.”

At the heart of it is a spousal relationship with the Lord and consecrated virgins are called “brides of Christ,” she said.

At the consecration on Dec. 8, Watkins will wear a wedding dress. She made it herself out of wool to symbolize her willingness to follow the Lamb of God wherever he goes.

After the homily, she will be called forth and prostrate herself before the altar as a sign of her willingness to lay down her life. Then she will renew her intentions to live a chaste life and be consecrated by Bishop Jenky.

The symbols of her vocation are a wedding veil, a ring and the Liturgy of the Hours, signaling her desire to enter into the prayer of the church.

There will be a special blessing at the end of Mass, Watkins said.

While there is no formal course of formation, she has met with Msgr. Jason Gray, episcopal vicar for consecrated life for the Diocese of Peoria. Father David Whiteside, pastor of faith communities in Havana, Lewistown and Manito, has helped her to form her interior life with God in preparation for consecration.

She has enjoyed answering questions from her students, who seem to understand things in a deep way.

“I’m excited that lot of them are going to come,” she said. “I’m happy to share what the Lord is doing. If I keep my eyes on the Lord, then it’s not about me. It’s about the goodness of what the Lord is doing and seeing those kids be excited about that, that makes up for any shyness I might feel.”

A cake reception and art show will follow the Mass and be held in the parish hall at St. Philomena Church, 1000 W. Albany, in Peoria. Everyone is welcome to celebrate with Watkins, but reservations are requested. Visit tarynconsecration.app.rsvpify.com.