‘Everybody stepped up’: Parish hall blessed at Immaculate Conception, Carthage 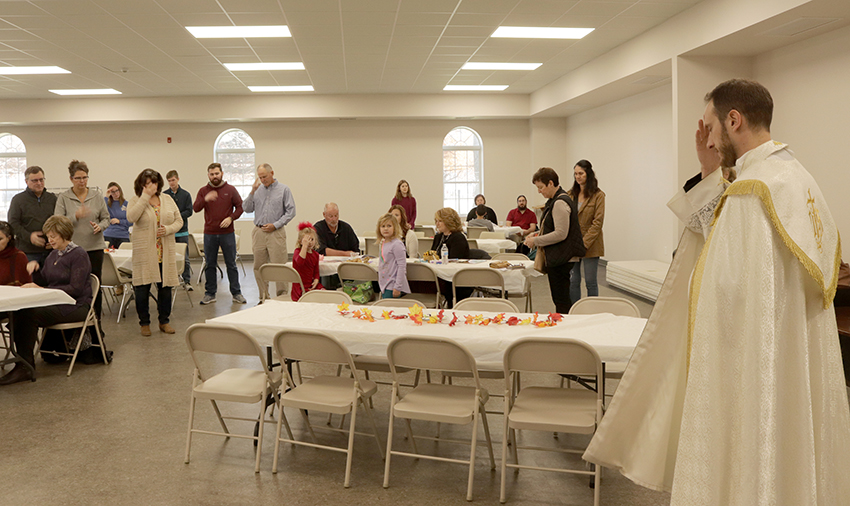 Father Thomas Szydlik leads Immaculate Conception parishioners in prayer before they share a pancake breakfast in celebration of their new parish hall being blessed in Carthage on Nov. 24. The hall can accommodate 225 people. (The Catholic Post/Jennifer Willems)

CARTHAGE — Members of Immaculate Conception Church celebrated the blessing of their new parish hall on Nov. 24 the same way they saw the project through to completion — with prayer and fellowship.

“May all who come here know the presence of Christ, experience the joy of his friendship, and grow in his love,” Father Thomas Szydlik prayed before walking through the building to sprinkle holy water in the six classrooms, parish offices, fellowship hall and kitchen. Then parishioners and their guests were invited to share a breakfast of pancakes and sausages. 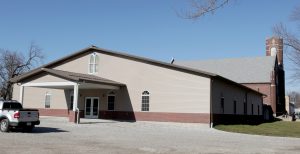 The new parish hall for Immaculate Conception Church in Carthage is a Morton building that has a fellowship hall, commercial grade kitchen, parish offices and six classrooms — three of which are designed to double as tornado shelters. (The Catholic Post/Jennifer Willems)

In the planning stages for seven or eight years, the hall came in at a little more than $800,000. That included demolition of the former rectory, architect fees and construction costs, according to Lyle Paben, trustee. With the funds that had already been put aside and a three-year capital campaign for $350,000, parishioners have raised nearly all of the money needed.

“Everybody stepped up,” he told The Catholic Post. “We’ve had two or three big donors — one even before we got officially approved.”

Among the donors was someone who contributed the cost of equipping the kitchen with a commercial grade stove, hood, fryers, refrigerators and sinks.

“This project had such broad support. We went back to the parish I don’t know how many times,” said Father Szydlik, parochial vicar of parishes in the Hancock County Catholic Community. “Toward the end, people were very well consulted.”

Not only did everyone get a chance to weigh in, he said, but they knew the need for classrooms, as well as a place for funeral dinners and a gathering space.

Ground for the new facility was broken last fall and concrete was poured, but the weather made it necessary to hold off on framing the building until this spring. The rainy weather further delayed things, but the building was ready to use by the time CCD classes started in September.

At 80 feet by 88 feet, the building is large enough to accommodate 225 people in the fellowship hall, which already has been used for a bridal shower and a birthday party for a senior member of the parish.

Barb Drozdz, a catechist for students in third and fourth grades and outreach coordinator for the Hancock County Catholic churches, explained that in the past social activities were held in the basement of the church. It became crowded quickly and was not accessible to those with mobility issues.

Accessibility was also a problem with the old rectory, which hosted Bible studies, meetings and some CCD classes. 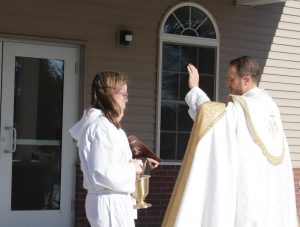 Father Thomas Szydlik blesses the new parish hall at Immaculate Conception in Carthage and those who will use it before walking through the building sprinkling holy water in classrooms, parish offices, fellowship hall and the kitchen. (The Catholic Post/Jennifer Willems)

Now everyone can participate in parish events, she said, adding that having the offices for Immaculate Conception and classrooms so close to the church is “wonderful.” A covered walkway between the hall and the church makes it easy for children to go to and from classes on Sunday morning and shields them from snow and rain.

Taking a lesson from the tornado that went through Washington on Nov. 17, 2013, three of the classrooms were built as storm shelters, Paben said. And the classroom area has a restroom so the children don’t have to enter the fellowship hall when it is being used, creating two separate spaces.

A PLACE TO REST

Part of the building, but with a separate entrance, is a small apartment for Father Szydlik and Father Anthony Trosley, pastor, to use if the weather is bad or they want to take a break between appointments at the five parishes they serve. In addition to the Carthage faith community, they minister at Sts. Peter and Paul in Nauvoo, where they live and have their offices; Sacred Heart in Dallas City; St. Mary in Hamilton; and Sacred Heart in Warsaw.

One of the special features to note is a stained glass window from the former St. Mary Church in West Point. It is above the main entrance to the hall and while it is not visible from the inside, it is backlit at night so it can be seen by passersby.

Landscaping and expanding the parking lot are on the parish’s wish list for next summer.

The architect for the project was Anthony Crane from Architechnics Inc. in Quincy. The contractor was Trotter Contracting Inc. of Macomb.