With joy and thanksgiving, officials and faithful throughout the Diocese of Peoria and around the globe welcomed Monday’s announcement that Pope Francis has called for the beatification of Venerable Archbishop Fulton J. Sheen in Peoria on Dec. 21, 2019.

“It was a surprise, an early Christmas present from the pope, and it is truly a great blessing for our diocese, for so many people who have worked and sacrificed and prayed,” said Msgr. Stanley Deptula, executive director of the Archbishop Fulton J. Sheen Foundation. “I’ve believed for a long time that Fulton Sheen is a gift to the church, a hero that we Catholics need in our day.” 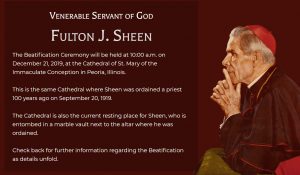 This is a screenshot from the home page of celebratesheen.com, the website that will offer updated information regarding the Dec. 21 beatification ceremonies in Peoria, Illinois, for Venerable Archbishop Fulton J. Sheen.

The beatification ceremony will take place during a 10 a.m. Mass on the Saturday before Christmas at St. Mary’s Cathedral in Peoria, where the famed media evangelist and author was ordained to the priesthood 100 years ago.

Bishop Daniel R. Jenky, CSC, announced the beatification date on the afternoon of Nov. 18 after the diocese received a document sent by email from the office of the Vatican Secretary of State confirming Pope Francis’ directive.

In an interview the following day with The Catholic Post, the newspaper of the Diocese of Peoria, Bishop Jenky described Archbishop Sheen — who died 40 years ago on Dec. 9 — as a kind of “American St. Paul the Apostle” because of his “endless zeal” for evangelization.

“It’s hard to think of anyone, except among the saints, so involved in bringing the world to Christ,” said Bishop Jenky. Calling Archbishop Sheen “a model for all of God’s people,” Bishop Jenky — who petitioned the Vatican on behalf of the Diocese of Peoria to open the canonization cause 17 years ago — said he was “happy to see this step finally arrive.”

When he learned of the Dec. 21 date, less than five weeks away, Bishop Jenky recalled “I simply said ‘yes’ and we’re going to make it happen.”

Cardinal Giovanni Angelo Becciu, prefect for the Congregation for the Causes of Saints, will preside at the Rite of Beatification and represent Pope Francis. It will be only the fourth such ceremony to take place in the United States, and Archbishop Sheen will be the first bishop from the U.S. beatified — declared “Blessed,” the step in the sainthood process prior to canonization.

Local planning for the beatification began in July when Pope Francis approved a miracle attributed to the intercession of Archbishop Sheen.

A Holy Hour will be observed at the cathedral on Friday evening, Dec. 20. Bishop Robert Barron — auxiliary bishop of Los Angeles who, like Archbishop Sheen, uses modern media to spread the Gospel — will preach. 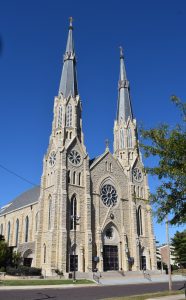 St. Mary’s Cathedral in Peoria will be the site of beatification activities on the weekend of Dec. 20-22. Archbishop Sheen was ordained to the priesthood in the cathedral on Sept. 20, 1919, and is now entombed in a side chapel. (The Catholic Post/Tom Dermody)

A Mass of Thanksgiving will take place at the cathedral on Sunday morning, Dec. 22.

Further information regarding beatification events will be posted online at celebratesheen.com as details, including seating availability, are made known.

“I’m overjoyed that we finally have a beatification date after all these years of hard work,” said Patricia Gibson, chancellor of the Diocese of Peoria. She said she has been “in almost constant contact” with Vatican officials since this summer’s events, which also included the transfer of Archbishop Sheen’s mortal remains from St. Patrick’s Cathedral in New York City to St. Mary’s Cathedral in Peoria.

“We’ve prayed for this for so long,” said Gibson. She and others expressed gratitude that the ceremony will take place at the cathedral in the centenary year of Archbishop Sheen’s priestly ordination.

Msgr. Jason Gray, who is chairing the diocese’s Cause for Beatification Planning Committee, called it “a great blessing” that the beatification will happen “right on the spot where Archbishop Sheen was ordained and also in the presence of his tomb.”

The cathedral location, however, also means that seating will be extremely limited and interest is already overwhelming.

“We’ll accommodate as many people as we can,” Msgr. Gray told The Catholic Post.

“THE WORLD IS INVITED”

At the same time, people around the globe can watch in the manner that brought Archbishop Sheen into millions of homes in the mid-20th century — through the media, including television, livestreaming and social media.

“It’s going to be an intimate celebration in Fulton Sheen’s home parish church,” said Msgr. Deptula. “But more importantly, the world is invited to the beatification via the media.

“What better man to celebrate in this way?” he asked. “In a beautiful church, in his church. But millions of people may truly feel present, truly participate in this beatification via the media world we live in and that’s very Fulton Sheen.”

The short time of preparation also has its advantages, said Msgr. Gray.

“We’ve been getting regular reports into the diocese about other alleged miracles attributed to the intercession of Fulton Sheen,” he said. Noting a second approved miracle is required for canonization, he added that “it’s a good thing the beatification will happen soon, because that opens the door to the miracle that might bring about his canonization.”

The miracle approved this summer that paved the way for beatification concerned the healing of James Fulton Engstrom of Washington, Illinois, who was considered stillborn when he was delivered during a planned home birth on Sept. 16, 2010. His parents, Bonnie and Travis Engstrom, immediately invoked the prayers of Archbishop Sheen and encouraged others to seek his intercession. Just as doctors were preparing to declare that he was dead, James Fulton’s heart started to beat at a normal rate for a healthy newborn. He had been without a pulse for 61 minutes. 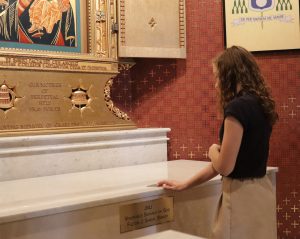 Eighth-grader Katherine Berg of Holy Family School in Peoria rests her hand and a holy card with the image of Venerable Archbishop Fulton J. Sheen on his tomb at St. Mary’s Cathedral in Peoria in September. (The Catholic Post/Jennifer Willems)

Bonnie Engstrom also expressed surprise the beatification date was set just weeks away, but said the family “looks forward to celebrating Fulton Sheen’s beatification during a favorite time of year.

Msgr. Richard Soseman, the episcopal delegate who assembled the sainthood cause and is now vice-postulator, agreed it is fitting that the beatification takes place just before Christmas.

“Through him, many souls were prepared to receive the Word of God and come close to his Son,” said Msgr. Soseman. “His beatification will lead directly into the season of rejoicing, and prepare countless souls who will watch on television around the world to receive Jesus at Christmas with even greater joy.”

Born in the Woodford County community of El Paso, Illinois, on May 8, 1895, Archbishop Sheen and his family moved to Peoria so that Fulton and his brothers could attend St. Mary’s Cathedral Grade School and Spalding Institute.

After ordination and brief priestly ministry in Peoria, he would go on to serve on the faculty of Catholic University of America for nearly 30 years and was national director of the Propagation of the Faith from 1950 to 1966.

He was a pioneer in radio and television, discussing the Catholic faith and moral issues of the day and winning the 1951 Emmy as outstanding television personality for his inspirational program “Life is Worth Living.”

A former auxiliary bishop of the New York Archdiocese, he served as Bishop of Rochester from 1966 to 1969 and spent his final years preaching retreats and missions.

Archbishop Sheen is the author of dozens of books, including his autobiography “Treasure in Clay.”