Prayers for the dead ‘a beautiful work of mercy,’ says pastor at Macomb PDCCW day 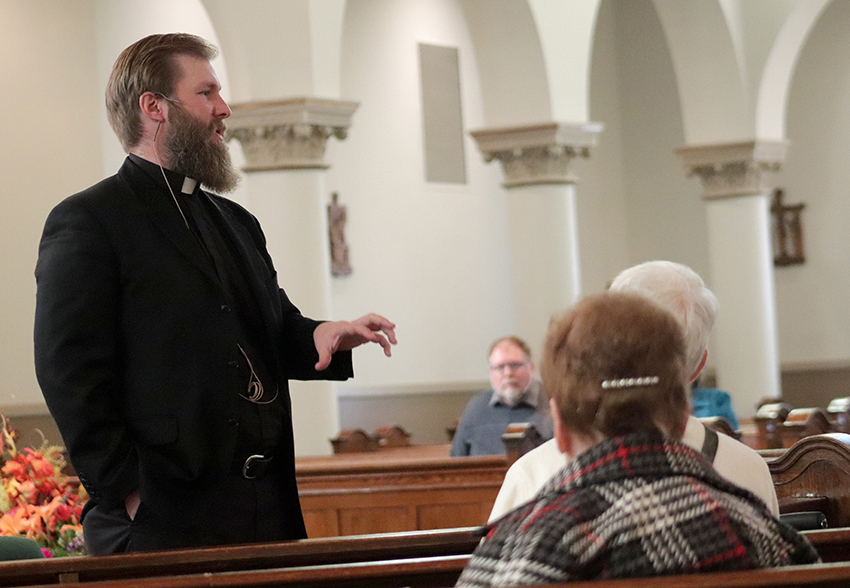 Father Adam Stimpson, pastor of St. Paul Parish in Macomb, addresses those attending a Day of Remembrance sponsored by the Peoria Diocesan Council of Catholic Women at his parish on Nov. 2, the Commemoriation of All the Faithful Departed (All Souls Day). The Catholic Post/Jennifer Willems

MACOMB — As a priest for 10 years, Father Adam Stimpson has attended to many people as they were dying and comforted family and friends — including his own on occasion. He has found over and over again how the prayers and rituals of the church have brought peace and something more, he told those who attended a day of remembrance sponsored by the Peoria Diocesan Council of Catholic Women on All Souls Day.

“The holy souls in purgatory can’t do anything for themselves, but Holy Mother Church can,” said Father Stimpson, pastor of St. Paul Church where the gathering was held. 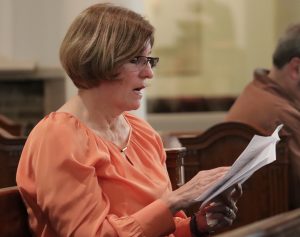 Judy Yeast, former president of the St. Paul Women’s Guild in Macomb, takes part in morning prayer as a day of remembrance sponsored by the Peoria Diocesan Council of Catholic Women begins on Nov. 2. The women’s guild hosted the All Souls Day gathering, which was held at St. Paul Church. (The Catholic Post/Jennifer Willems)

Urging participants to pray for the dead, he called it “a beautiful work of mercy.”

More than 40 women and men accepted the invitation during a day that included Mass and a Holy Hour with exposition of the Blessed Sacrament and an opportunity for the sacrament of reconciliation. They also prayed the rosary and Chaplet of Divine Mercy together, while leaving time for quiet reflection.

“The day of remembrance is something our council has done about every other year. For me, it’s a very special time,” said Kim Padan of Danville, PDCCW president.

“It’s one of the most beautiful parts of our Catholic faith . . . to come together and think about the poor souls who are still being purified, waiting for that perfect union with God,” she said. “The good news, of course, is that purgatory is not forever. Every soul there will be joined to God someday.”

In his remarks, Father Stimpson acknowledged that purgatory is a time of more intense purification than is assigned to us on earth, but said it is still filled with hope.

“God is so good to us in our prayer,” he told them. “The holy souls in purgatory need that.”

All Saints Day and All Souls Day remind us to renew our own efforts going forward and to join the saints in their mission of intercessory prayer, he said.

A PART OF LIFE

In the second reflection of the day, Father Michael Adrie, SMA, parochial vicar at St. Paul, said some people have the impression that talking about death is morbid. Father Michael Adrie, SMA, parochial vicar at St. Paul Parish in Macomb, tells participants at the day of remembrance that it is important to reflect on death. “It is a part of ouriving here on earth,” he said. (The Catholic Post/Jennifer Willems)

“Actually, I believe it is important for us to reflect on death,” he told those gathered in church. “It is a part of our living here on earth.”

He called it a transition from this life to a better life and offered his listeners several Scripture passages that bring comfort and hope.

Wisdom 3:1-9, for example, reminds us that the souls of our loved ones are in the hands of God, “who wants the best for us and will provide more than we can ever imagine.”

Father Michael also pointed to Romans 6:3-4, in which St. Paul says that those who were baptized in Christ were baptized not only into Christ’s death but into his resurrection.

“With all of this in mind we can turn to today’s All Souls celebration. Today we show our communion with those who have died and are making the transition to the fullness of God’s presence,” he said.

The day of remembrance was hosted by the St. Paul Women’s Guild. Padan praised them for being active in their community as well as at events around the Diocese of Peoria.

“We wanted to honor them for that and thank them for that by coming here and visiting them on their home turf,” she said. “It’s awesome to be here.”

At the end of the day, Padan offered them words of encouragement.

“Keep doing the work God has called you to do,” she said.

RELATED VIDEO: Below is the All Souls Day memorial video produced by The Catholic Post and featuring images of recently deceased Catholics of the diocese contributed by readers.