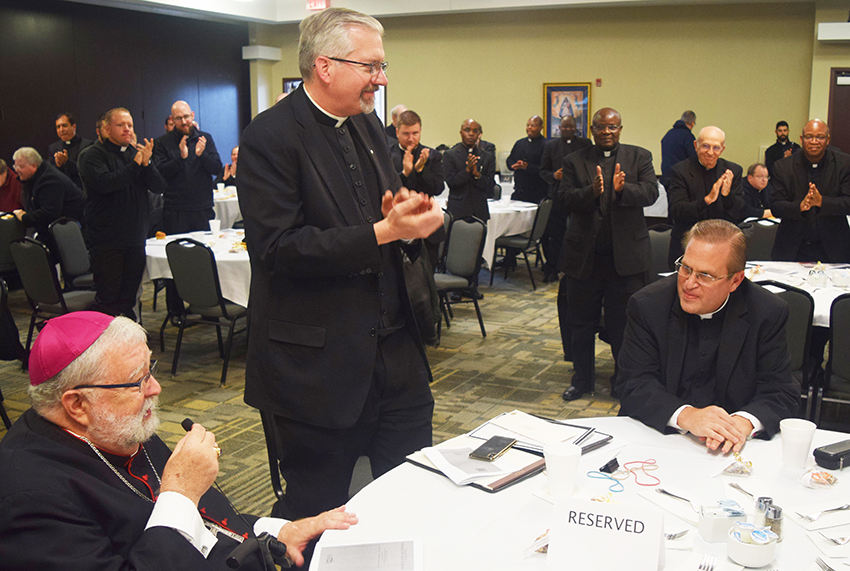 Bishop Daniel R. Jenky, CSC, has appointed Msgr. Philip Halfacre as vicar general of the Diocese of Peoria, succeeding Msgr. James Kruse as one of his primary assistants and advisers in administrative aspects of the diocese.

The appointment was announced on Oct. 16 and became effective that day.

“I am grateful to Msgr. Halfacre for his willingness to take on these new responsibilities,” said Bishop Jenky, noting that Msgr. Halfacre will continue as pastor of St. Michael the Archangel Parish in Streator and Sts. Peter and Paul, Leonore. He has guided the Streator parish since 2011.

The bishop also expressed deep gratitude to Msgr. Kruse, who has served as a vicar general since 2011 — first sharing duties with Msgr. Paul Showalter, P.A., and then as the sole vicar general after Msgr. Showalter’s move to senior status in June of 2018.

“Words cannot express my gratitude to Msgr. Kruse for all of his hard work and dedication to the diocese, and to me personally, in his work as vicar general over the last eight years,” said Bishop Jenky.

Msgr. Kruse has requested a return to parish ministry in the near future.

DUTIES OF A VICAR GENERAL

While a vicar general assists the bishop in various administrative aspects of the diocese, most of his duties usually involve oversight of priests, including personnel matters, and addressing concerns within parishes. He is a member of nearly every diocesan committee.

The vicar general is to make decisions following the intention and the mind of the bishop. His office is an extension of part of the bishop’s executive power — handling issues regarding policy and procedure in the diocese. 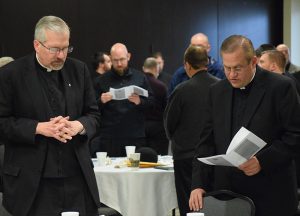 While the bishop is the most visible face of a diocese, a vicar general handles many of the bishop’s administrative tasks behind the scenes. While in some dioceses the vicar general may also serve as chancellor and/or moderator of the Curia — overseeing those in diocesan administration — in the Diocese of Peoria those roles have been filled since 2004 by Patricia Gibson.

“Being a vicar general is one of the hardest ministries anyone has,” said Bishop Jenky on Tuesday as he publicly thanked Msgr. Kruse when the priests of the diocese met for a two-day gathering at the Spalding Pastoral Center.

“You are always putting out fires,” said the bishop, “and usually you get very little thanks for this necessary and good work.” Bishop Jenky praised Msgr. Kruse’s knowledge of canon law and said he has “served me faithfully and with great skill. He has been helpful in a million ways, especially as a friend and a brother priest.”

The bishop then asked the priests to join him in thanking Msgr. Kruse for his ministry as vicar general, and they responded by standing and offering sustained applause.

A ROLE OF SERVICE

Msgr. Halfacre, who turned 55 on Oct. 15, was ordained a priest of the Diocese of Peoria in 1991. Following a year as parochial vicar of St. Thomas the Apostle Parish in Peoria Heights, he was named pastor of St. Mary Parish, Utica, and chaplain of Marquette High School in Ottawa. In 1998, he became pastor of St. Patrick Parish in Ottawa, where he served until becoming pastor of St. Michael the Archangel Parish in Streator in 2011. He added pastoral duties at the Leonore parish in 2017 and has taught high school students at Marquette since 1992.

He has been vicar of the Ottawa Vicariate since 2011 and has served as censor librorum — responsible for reviewing texts for doctrinal accuracy — since 2008. Pope Benedict named him a Chaplain to His Holiness with the title of monsignor in 2011.

In a letter to priests of the diocese the day after his appointment, Msgr. Halfacre noted that “every leadership role in the Church . . . is one of service.”

“Parish priests are the face of the Church for the people we serve, and it is my great hope that I may be able to assist you in the good work that you do,” he wrote.

Msgr. Kruse, 49, was ordained in 1996 and has served as parochial vicar at St. Joseph Parish, Pekin, as well as pastor of parishes in Camp Grove, Wyoming, Granville, Hennepin, Mendota, Peterstown, Earlville, and East Peoria. He is a former vicar of the LaSalle vicariate, assistant vocations director, and vice-chancellor of the diocese.

He received a licentiate in canon law in 2010 and has served in various positions on the diocesan Tribunal, including judicial vicar and, since Aug. 16, as adjutant judicial vicar.