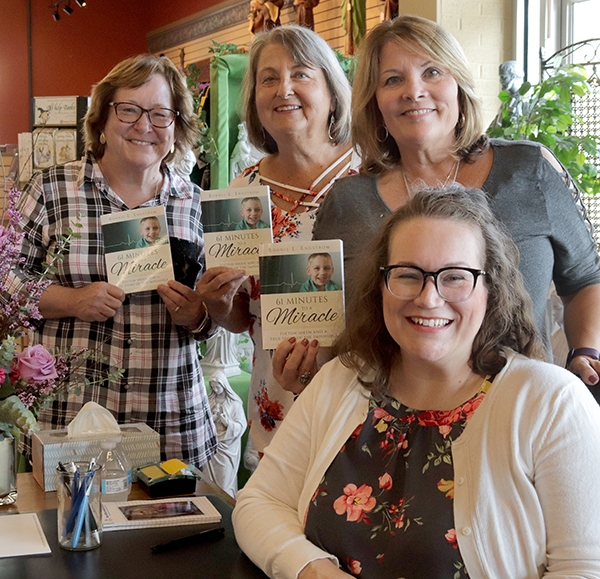 Diane Anderson, MaryEllen Nommensen and Marie Leatherby are happy to display the copies of "61 Minutes to a Miracle: Fulton Sheen and a True Story of the Impossible" that were just signed by author Bonnie Engstrom. They said they have bought multiple copies of the book because they keep giving it to people who want to read it. (The Catholic Post/Jennifer Willems)

When Bonnie Engstrom’s new book, “61 Minutes to a Miracle: Fulton Sheen and a True Story of the Impossible,” was done and scheduled for publication by Our Sunday Visitor in September, she knew it would have to be updated someday.

That day came sooner than anyone could have guessed, however.

While pre-orders were being taken, the remains of Venerable Archbishop Fulton Sheen were moved from a crypt at St. Patrick’s Cathedral in New York to a new tomb at St. Mary’s Cathedral in Peoria on June 28. The second major change to the timeline in the book became necessary on July 5, when Pope Francis approved her stillborn son’s healing through the intercession of Archbishop Sheen as the miracle needed for beatification.

Read The Catholic Post’s review of “61 Minutes to a Miracle: Fulton Sheen and a True Story of the Impossible”

The original subtitle, “The True Story of a Family’s Devotion,” also changed and Engstrom worked with editors to rewrite one of the final chapters to reflect the good news.

As she signed copies of “61 Minutes to a Miracle” at Lagron-Miller in Peoria on Sept. 28, Engstrom said life hasn’t changed too much for her family, which includes husband Travis and their eight children, since this is something that has been unfolding for them over the last nine years. What has changed is how she tells the story of James Fulton’s birth and miraculous return to life on Sept. 16, 2010.

“When I tell James’ story, I always end by sharing the Gospel,” she said during a break from signing books. “I realized people are listening to me and they may be faithful Catholics — they attend Mass regularly — but they don’t know God loves them and they don’t understand that Jesus died for their sins. So I use that opportunity to make that very clear.”

Engstrom said she and Travis hope to combine a book signing and speaking tour with a family vacation next summer that will take them to Minnesota, South Dakota, Colorado, Oregon, California, Arizona and Kansas. Much depends on if and when a date for Archbishop Sheen’s beatification is announced.

“We’ll go west and just stop at a bunch of places along the way and share the story,” she said.