Newman Hall resident director, athlete, and new Catholic is on the right tracks 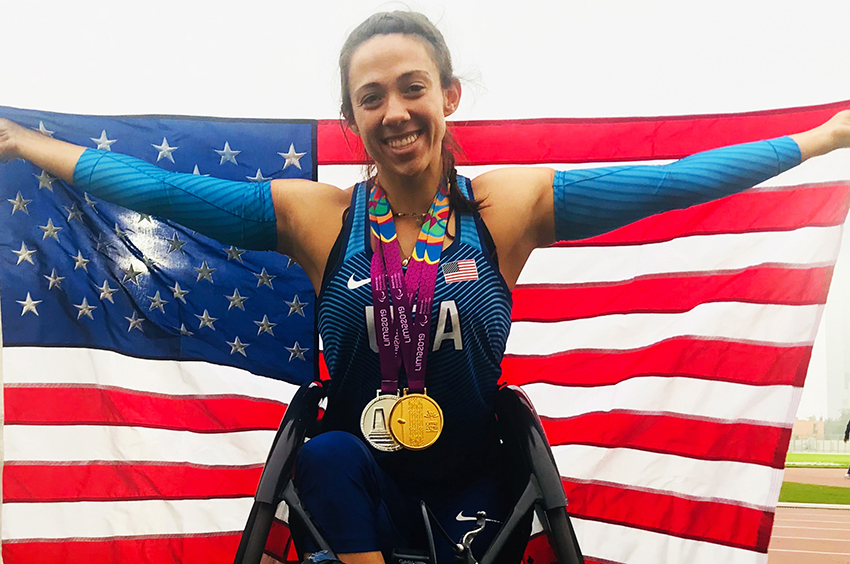 CHAMPAIGN — Jenna Fesemyer is a world class wheelchair athlete with hopes of representing the United States at the 2020 Paralympic Games in Tokyo.

But those who know the 22-year-old resident director at Newman Hall here would award “our Jenna” gold medals for joyful attitude, academics, leadership, and witness of her newfound Catholic faith.

“She’s living the fullness of life,” said Father Chase Hilgenbrinck, assistant chaplain at St. John’s Catholic Newman Center at the University of Illinois, which operates Newman Hall. “Many people know (the athletic) side of Jenna, but she’s multi-faceted and a professional in everything she does.” 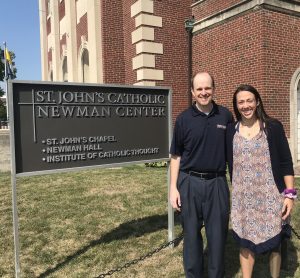 Jenna Fesemyer is pictured with Tristan Pisarczyk, director of operations and finance at St. John’s Catholic Newman Center at the University of Illinois in Champaign. (Provided photo)

One exception might be a lack of research when it came to selecting a college residence hall. But even that rare misstep turned out to be a golden blessing.

When Fesemyer came to the University of Illinois in the fall of 2015 after a trailblazing four years at Southeast High School in Ravenna, Ohio, she had no idea that her residence choice of Newman Hall was part of the largest Catholic campus ministry of its kind in the United States.

“My teammate recommended it to me because Newman Hall is very accessible and it’s close to the quad,” said Fesemyer, who was born without a left leg and hip socket because of a rare congenital disease. “Those are the two things I needed, so that’s how I picked Newman Hall — for the amenities.”

Fesemyer, who had attended a non-denominational church with her family, got more amenities than she anticipated.

“It was quite a surprise when we rolled up in the car and we saw priests and religious out moving boxes onto carts,” she told The Catholic Post last week. “My family, we all looked at each other and we’re like, ‘What did we do?’”

She now recognizes that God was doing something. 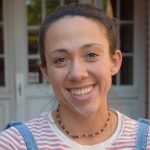 In the second semester of her freshman year, she and her roommate took part in a Newman Center-sponsored Koinonia retreat. It was her first experience with adoration and Mass, and her curiosity about the Catholic faith ignited. The fire was fueled by the sense of community she had already experienced at Newman Hall.

Fesemyer completed the Rite of Christian Initiation of Adults program at St. John’s and entered the church on Divine Mercy Sunday of 2017 — a week after her classmates because she was competing in the Boston Marathon over Easter weekend.

“Divine Mercy Sunday holds a very special place in my heart,” she says.

There are many special places in Jenna Fesemyer’s heart.

There is a love for competition. A triplet, she is technically the youngest child of David and Cindy Fesemyer by one minute. Brother Jonathan was born first and sister Jessica second. “They never let me live it down,” she said of her only siblings, whom she considers her “truest and best friends.” 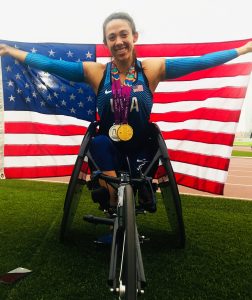 Fesemyer competes and excels in all distances of wheelchair racing, from sprint to marathons.

Her mother was a collegiate athlete and later a gym teacher and high school coach, and Jenna inherited her competitive spirit. Wearing a prosthetic, young Jenna played volleyball, basketball and threw the discus in middle school. She continued with discus in high school, and also became a strong golfer.

When Ohio opened its state track meet to wheelchair racing, Fesemyer became a pioneer, although reluctantly at first. She would go undefeated, winning 12 gold medals.

“Little did I know this would be an open door to coming to the University of Illinois and, ultimately, my life as a Catholic,” she says.

The university is considered the top destination for wheelchair athletics. Fesemyer, who will graduate in December with a degree in kinesiology and go on to graduate school, trains with the University of Illinois Track and Road Racing Team. She joins about 30 other athletes on the road at 8 a.m. Monday through Saturday, and lifts weights two days a week. She competes in six major world marathons each year — next up is the Chicago Marathon on Oct. 13 — and this summer earned a spot on the 2019 U.S. Paralympic National Team. In late August she competed in the Parapan American Games in Lima, Peru, finishing first in the 800, 1500 and 5000 meter races, second in the 400, and fourth in the 100.

Stronger still is her love for God and the Catholic community at Newman.

“She’s new to Catholicism, but not new to her love of Jesus,” said Father Hilgenbrinck. “That love, her relationship with the Lord, has always been present and she’s always sought to go deeper.” 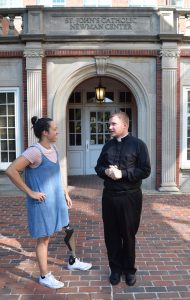 Fesemyer chats with Father Kyle Lucas, assistant chaplain, at the St. John’s Catholic Newman Center courtyard in Champaign. “Gloryifying Christ comes first, always,” she told The Catholic Post. “I wouldn’t be where I am today if I didn’t look to Christ in my times of need or doubt.” (The Catholic Post/Tom Dermody)

“Glorifying Christ comes first, always,” said Fesemyer, who says at times she prays the rosary while taking part in a marathon. “I wouldn’t be where I am today if I didn’t look to Christ in my times of need or doubt. When we turn to Christ, our joys are multiplied.”

She became a resident adviser at Newman Hall and now works as resident director of the 600-student hall she once knew little about. She expressed gratitude to the Newman staff for being “true witnesses to Christ for our residents and the community here.” Special thanks went to Tristan Pisarczyk, director of operations and finance, for his “peaceful presence” in mentoring her and helping prioritize the many aspects of her student, athletic, work and faith life.

“I love learning and I love challenging myself,” she said. “It would be a lot more difficult if these weren’t things I love. I think that’s the secret.”

Something Fesemyer is not sure she loves is being called an inspiration.

“I have very mixed feelings about the word inspiration,” said Fesemyer. “I appreciate the comments and treasure them, but I want to ask people ‘Why?’ Is it because I have a disability and others are so openly choosing to see me differently? I do not perceive myself as being different. I know I have a disability and I look different, but I’d rather be an inspiration because of adversities I have overcome as an athlete, student, and hall director, balancing all three.”

And that is exactly how she is seen at Newman Hall. But Jenna left out a few additional reasons.

“She’s got a really contagious personality,” said Father Hilgenbrinck. “She’s so joyful.” She is also an evangelizer, including by leading — and encouraging others to attend — the Koinonia retreat that meant so much to her.

“She is someone a lot of the women in this hall look up to for many reasons,” said Father Hilgenbrinck.

Next up is graduate school and studies in educational policy organization and leadership, with a focus in student affairs. Fesemyer hopes to be a resource for students on campus in some capacity. She’s not concerned about the how or when or where, knowing she is on the right track.

“God has never let me down in the past when it comes to figuring out my path,” she said with that characteristic gold medal smile.