EDITOR’S NOTE:  Following is the homily from the Mass of Christian Burial for Msgr. Albert Hallin, P.A., a senior priest of the Diocese of Peoria who died on Aug. 26 at the age of 90. His obituary appeared in the Sept. 1 issue of The Catholic Post. The funeral was celebrated on Aug. 30 at Holy Cross Church in Champaign, and homilist was Msgr. Doug Hennessy.

I met Al Hallin in my first year as a seminarian. At that time, all the seminarians in Philosophy or Theology had to attend summer school at St. Bede during the month of July.

Each afternoon, softball games were on the schedule. They weren’t taken too seriously by most of the seminarians. I was on Al’s team. Al appeared, complete with a written lineup card. Thus, I discovered how organized and intense he was. I discovered this again when I vacationed with him. 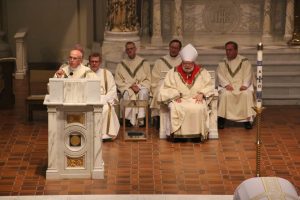 Msgr. Doug Hennessy reflects on the life and faith of Msgr. Hallin during his homily at the funeral Mass at Holy Cross Church in Champaign. (Photo courtesy of Dave Devall)

Al was teaching at Bergan High School when I returned to Peoria and the Religious Education office. Al was an extraordinary teacher, very well versed in his subject matter, especially the Scripture, creative in his methods and clearly very concerned for and caring about his students.

I had occasion to observe him teach a few times. Every time I did, I learned something watching his teaching. Throughout his years, Al loved to teach and was extremely generous in sharing his gifts wherever they were needed. He was very generous with the Education office as we tried to provide help to religious teachers around the diocese in those years.

LOVE FOR THE CHURCH, PRIESTHOOD,  AND COUNTRY

When Al left Bergan to become a pastor, he was an energetic, enthusiastic, and well-organized pastor. In the several parishes he led, he was deeply concerned about the well-being of his people, and about the Gospel and the church. And he continued to be a teacher, preaching well and teaching whenever the opportunity arose. He continued to help the deacons and in many other diocesan programs.

Hear priests of the Diocese of Peoria sing the Salve Regina at the conclusion of Msgr. Hallin’s funeral. Click here for video.

In these last years as his health declined, I think his greatest suffering was being unable to do the works of ministry which he had done so well and for so long. Gradually, over his long final illness, he came to surrender peacefully to his Lord.

All his life Al believed deeply that his Vindicator, his Redeemer, lives and because he does, Al trusted that he would see God. Like Paul, he was “convinced that neither death, nor life, nor angels, nor principalities, nor present things, nor future things . . . nor any other creature will be able to separate us from the love of God in Christ Jesus, our Lord.”

So this morning with confidence in the power and promise of God’s Word, we commend Msgr. Al Hallin to the Lord’s grace and mercy this morning. Jesus assures us, “In my Father’s house there are many dwelling places . . . if I go and prepare a place for you, I will come back and take you to myself, so that where I am, you also may be.”

What an extraordinary promise! Death becomes a homecoming. We trust this promise is now fulfilled for Msgr. Al Hallin, truly a coming home.  For Al knew the Way home, Jesus — who is the Way, the Truth, and the Life. And I think Al knew the Way probably better than most of us.

May he rest in peace. May he live in glory.