As he did during his long priesthood, the El Paso native provided words of challenge and hope to institute participants by way of a keynote “conversation” and breakout sessions by Msgr. Stanley Deptula, executive director of the Archbishop Fulton John Sheen Foundation, and Bonnie Engstrom of Washington. The healing of her stillborn son, James Fulton, through the intercession of Archbishop Sheen, was declared a miracle by Pope Francis on July 5 and moves Sheen one step closer to beatification. (See that story here.) 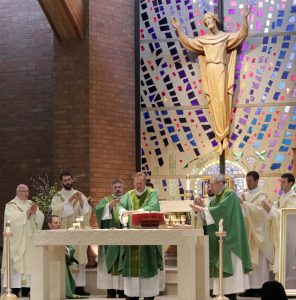 Msgr. James Kruse, the principal celebrant for the closing Mass of the Diocesan Catechetical Institute, assured the educators of Bishop Daniel R. Jenky’s gratitude for their work and dedication. (The Catholic Post/Jennifer Willems)

“He wants to be your friend,” said Msgr. Deptula, who is also the pastor of St. Matthew in Champaign and St. Boniface in Seymour.

Another friend, Bishop Daniel R. Jenky, CSC, was not able to attend the institute as planned, but sent a message of support with Msgr. James Kruse. The vicar general of the Diocese of Peoria, he celebrated the closing Mass in Bishop Jenky’s place.

Msgr. Kruse invited them to draw closer to the Lord in the Eucharist and listen for him to say, “Thank you. I’ve chosen you. I love you enough to entrust the greatest of the kingdom, the little children, to you.”

LOVE FOR THE EUCHARIST

With his beatification celebration anticipated within the next year, Archbishop Sheen was the focus of the Diocesan Catechetical Institute.

As the event opened, Msgr. Deptula and Engstrom took their places on stools in the front of St. Vincent de Paul Church, with a large portrait of the sainthood candidate on an easel behind them.

Msgr. Deptula provided background on the life of Archbishop Sheen for the educators, and then spoke with Engstrom about what they had learned from the man who started out as a priest of the Diocese of Peoria and went on to teach at The Catholic University of America for nearly 30 years. He also served as national director of the Society for the Propagation of the Faith, supporting the missions through his popular television show, “Life is Worth Living,” and raising funds around the world. (For more, see CelebrateSheen.com.)

A writer, speaker and blogger, Engstrom said she found Archbishop Sheen to be very relatable as a teacher as she watched episodes of “Life is Worth Living” on YouTube with her husband, Travis.

Archbishop Sheen’s devotion to the Eucharist continues to provide inspiration for Engstrom and her family, which includes eight children.

“He loved Jesus Christ in the Eucharist. When he was ordained and laid on the floor of (St. Mary’s Cathedral), he made a promise that every day he would make a Holy Hour and for over 60 years he did that,” she said. “It did not matter where he was in the world.”

Knowing that many lay people would not be able to do that, he noted that even 15 minutes offers great benefits, according to Engstrom.

“We do that as a family. We will try to pop into church. We have taught our kids that they kneel, they pray, they genuflect, they make the sign of the cross,” she said. “When we leave they say, ‘Bye, Jesus!’ and they wave.”

And when they drive past a Catholic church, they make the sign of the cross and say, “Praise to you, Lord Jesus Christ,” because they know he is there in the tabernacle.

Archbishop Sheen’s witness is especially important at a time when a recent survey revealed that 69 percent of Catholics believe the bread and wine used at Communion are symbols of the body and blood of Christ, Engstrom told them.

“In case you don’t know, during Mass Jesus Christ gives himself to us through transubstantiation and he is fully present in the Eucharist — body, blood, soul and divinity — in what looks like bread and what looks like wine,” she said. “He does that because he loves us.”

Saying that the title of his breakout session, “How to Make a Saint,” was misleading but true, Msgr. Deptula offered a quick overview of what goes into the process of beatification and canonization, including how miracles are investigated.

He gave his listeners contact information for Dr. Andrea Ambrosi, the postulator for Archbishop Sheen’s cause for sainthood, and invited them to learn more by visiting jgray.org, the website of Msgr. Jason Gray.

Now the pastor of St. Thomas the Apostle Parish in Peoria Heights, Msgr. Gray worked at the Vatican Congregation for the Causes of Saints from 2012 to 2015, and is coordinating plans for the eventual beatification of Archbishop Sheen.

Msgr. Deptula did not want to talk about the canonical process of making saints, however.

“I really believe this to be true — Fulton Sheen would prefer you to be a saint than for him to be canonized.” — Msgr. Stanley Deptula

Msgr. Deptula said one of the ways Archbishop Sheen challenges us to do that is by being concrete in our spiritual lives. A good start is making decisions that are real and life changing, he told institute participants.

“Life changing because you’re going to do something every day,” he said. “Do not leave here saying, ‘I’m going to pray three hours on my knees in the adoration chapel every afternoon.’ You’re not going to do that, are you? That’s an impossibly concrete resolution.”

Instead, Msgr. Deptula encouraged them to formulate little ways, done daily, that could make them saints.

Archbishop Sheen desired to be transformed by Christ and to live as a son of the Father, and embraced confession as a way to do that, according to Msgr. Deptula.

He also spoke of the sainthood candidate’s devotion to the Eucharist and a daily Holy Hour and asked his listeners to consider what genuine prayer might look like in their own state of life. 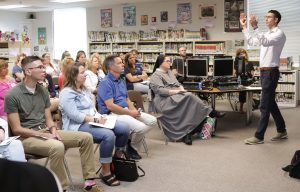 Sean Foster, principal of Central Catholic High School in Bloomington, offers insights on “How to Thrive, Not Just Survive: A Guide to Living Our Mission, Even in February” during his breakout session. (The Catholic Post/Jennifer Willems)

“If you can make a daily Holy Hour, you should do that. If you can do 15 minutes daily, do that. Maybe you should look at how you celebrate Sunday, the Lord’s day,” Msgr. Deptula said, adding that even one extra Mass during the week “exponentially transforms our lives.”

“Be concrete in your decisions and stick to them,” he said. “Whatever you can do, include the Eucharist because that’s where Jesus is. . . . The more time you spend with him, the more real he will be.”

Those who attended the Diocesan Catechetical Institute had 11 other breakout sessions to choose from, including “61 Minutes to a Miracle,” which was given by Engstrom, who shared the details of her son’s birth and eventual healing, and the role Archbishop Sheen played, and “Teaching with Fulton Sheen,” presented by Katie Bogner, junior high religion teacher at St. Philomena School in Peoria and author of a Sheen curriculum.

The day was sponsored by the diocese’s Office of Catholic Schools, Office of Priestly Formation, Office of the Permanent Diaconate, Office of Stewardship and Development, and Office of Divine Worship. Coordinating things at St. Vincent de Paul were Father Stephen Willard, pastor; Patsy Santen, principal; and Sarah Hogan, director of religious education.