Miraculous healing of Washington boy ‘given to the church, for the church’ 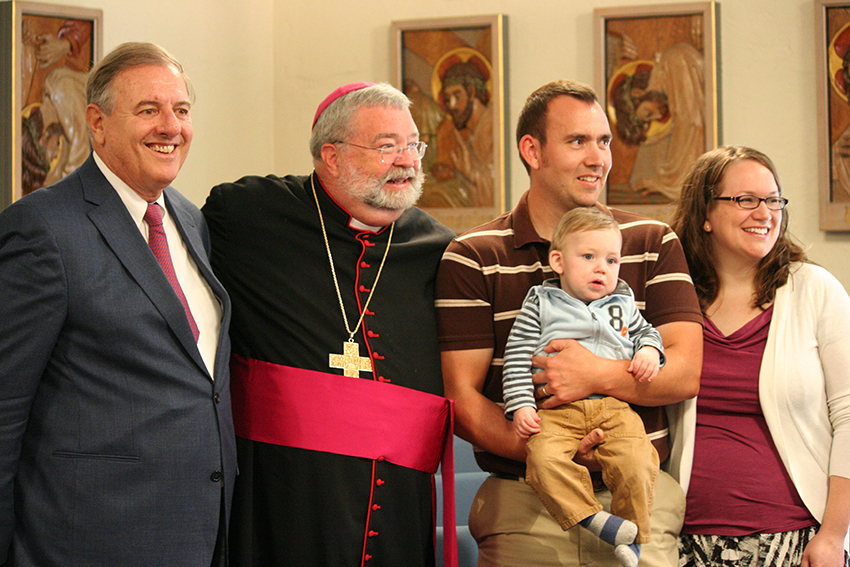 James Fulton Engstrom is held by his parents, Travis and Bonnie Engstrom, as the tribunal to investigate his miraculous healing through the intercession of Venerable Archbishop Fulton J. Sheen began on Sept. 7, 2011. With them are Dr. Andrea Ambrosi, postulator of Archbishop Sheen's cause for sainthood, and Bishop Daniel R. Jenky, CSC. (The Catholic Post file photo/Jennifer Willems)

WASHINGTON — At long last, Bonnie Engstrom doesn’t have to use the word “alleged” when talking about the miraculous healing of her son, James Fulton, through the intercession of Venerable Archbishop Fulton J. Sheen.

On Friday, July 5, Pope Francis accepted the findings of his medical and theological advisers and the recommendation of the Congregation for the Causes of Saints and declared the Washington boy’s healing to be a miracle. The decree, which was published by the Vatican on July 6, moves Archbishop Sheen one step closer to beatification.

In a recent interview with The Catholic Post, Engstrom said God had allowed the miracle to happen for his honor and glory.

Bishop Daniel R. Jenky, CSC, shared the news of Pope Francis’ declaration “with overwhelming joy” early in the morning on July 6, saying, “It is truly amazing how God continues to work miracles.”

Later in the day, as she continued to search for words about the miracle decree, Engstrom posted on her blog that the family was excited, even elated.

“But it surprises me still that something so extraordinary has happened to our remarkably ordinary family,” she said at bonnieengstrom.net. “Please remember that we are small and unimportant except that, just like you, we are known and loved by our good God.”

God proved that on Sept. 16, 2010, after James Fulton was born without a pulse or drawing breath. Considered stillborn, he was rushed to OSF HealthCare Saint Francis Medical Center in Peoria. 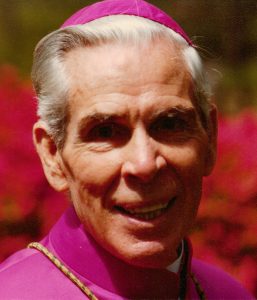 In their moment of crisis, after it was discovered that James Fulton had a true knot in his umbilical cord, it was the most natural thing in the world for Bonnie and her husband, Travis, to call on Archbishop Sheen for help. He had been the friend whose prayerful support she had sought throughout her pregnancy.

“I remember Travis and I were watching YouTube videos of Bishop Sheen preaching and there’s old footage of him on a television game show,” Bonnie said. “We were so impressed — he’s funny, he’s smart, and he’s just so approachable and warm. We were just so engaged with him.”

While Archbishop Sheen was a world famous media pioneer who had also taught at The Catholic University of America in Washington, D.C., and headed the Society for the Propagation of the Faith, his roots were just down the road in El Paso, Illinois. They knew his cause for canonization was being sponsored by the Diocese of Peoria, so the Engstroms decided if their unborn child was a boy they would name him James Fulton.

“I started asking, basically on a daily basis, for Fulton Sheen’s prayers, for his intercession in the life of my child and in our marriage — to walk with us and to walk with my son, that he would be a lifelong Catholic who would love God and love his faith, that he would be a man of integrity,” Bonnie said. “I was asking him to intercede every day while I was pregnant.”

The baby was given advanced medical treatment, but doctors determined he couldn’t be revived. After 61 minutes, however, his little heart started to beat.

In September 2011, a few days before his first birthday, the Diocese of Peoria initiated an investigation into the events of James Fulton’s recovery. The tribunal heard testimony from family members, first responders, doctors, nurses and others present at his birth. Each testified that there was no medical explanation for the infant’s recovery.

The case was sent to the Congregation for the Causes of Saints in December 2011, and reviewed by panels of medical experts, theologians, and the cardinals and bishops of the congregation. The miracle received a unanimous recommendation from them all.

Just as she has in every talk she’s given, Engstrom made it clear in her blog post that it was God, “the Great Physician,” who restarted her son’s heart and healed his brain and other organs.

“Babies are gifts, only and always, and we are so grateful to God for His generosity, faithfulness, and love,” she wrote. “We look forward to celebrating the beatification of Fulton J. Sheen with the whole church.”

For updates on plans for beatification and background on Archbishop Fulton Sheen, visit celebratesheen.com.