Just eight days after the transfer of Venerable Archbishop Fulton J. Sheen’s mortal remains from New York City to Peoria, Pope Francis on July 5 approved a miracle attributed to the intercession of the famed evangelist and media pioneer.

The miracle concerns the healing of James Fulton Engstrom of Washington, who was considered stillborn when he was delivered during a planned home birth on Sept. 16, 2010, and remained without a pulse for 61 minutes. (See related story.)

Bishop Daniel R. Jenky, CSC, greeted the news with “overwhelming joy” and announced that the Diocese of Peoria can now formally begin planning for a beatification ceremony in Peoria.

The Diocese of Peoria can now formally begin planning for a beatification ceremony in Peoria.

The date of the beatification — which would be just the fourth such ceremony to take place in the United States and is expected to draw tens of thousands of pilgrims — had not been announced by the Vatican as The Catholic Post went to press on Tuesday evening. Bishop Jenky and diocesan officials have expressed hope that it could happen soon, noting the 100th anniversary of Archbishop Sheen’s ordination as a priest of the Diocese of Peoria is approaching on Sept. 20.

“This is a moment of grace,” Bishop Jenky said in a July 11 televised interview with Raymond Arroyo on EWTN’s “The World Over.” “It means a great blessing not only for our diocese, but for the universal church.”

“We’ve never needed good examples of relentlessly announcing the Good News, in season and out of season, more than we do today, and Fulton Sheen is an outstanding example of that,” said Bishop Jenky.

Beatification is a ceremony at which the title of “Blessed” is granted and the Catholic Church recognizes an individual for martyrdom or holiness of life. Aside from martyrdom, two miracles must be accepted by the church as having occurred through the intercession of a prospective saint, one before beatification and the other before canonization.

Pope Francis authorized the Congregation of the Causes of Saints to promulgate the decree at an audience on July 5. In addition to affirming the miracle for Archbishop Sheen, the pope recognized the heroic virtues of one woman and six men, and enrolled Blessed Bartholomew of the Martyrs in the catalog of saints, which is equivalent to canonization.

“It is truly amazing how God continues to work miracles,” Bishop Jenky said in a statement released July 6 by the Diocese of Peoria. “I am so grateful that the Vatican acted so quickly after last week’s transfer of Sheen’s remains from New York to the Cathedral of St. Mary of the Immaculate Conception in Peoria.”

The diocesan news release shared the story of James Fulton Engstrom’s birth and the canonical investigation into the events of his miraculous recovery, noting he has now grown into a healthy young child.

“This investigation examined medical records and testimony provided by family members, EMT’s, doctors, nurses, and others present at the time of his birth,” said the diocesan release. “Each testified there was no medical explanation for the infant’s recovery.”

Cardinal Giovanni Angelo Becciu, prefect for the Congregation of the Causes of Saints, would preside at the beatification ceremonies in Peoria.

Born in El Paso, Illinois, and raised in Peoria, Archbishop Sheen would go on to teach at The Catholic University of America in Washington and lead the Society of the Propagation of the Faith. Perhaps he is best remembered for his popular television show, “Life Is Worth Living.” 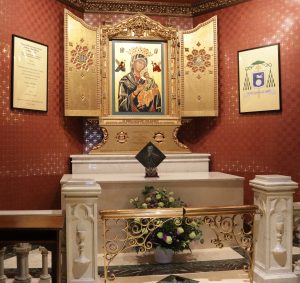 Bishop Jenky called him “one of the greatest evangelizers from America,” a man of “extraordinary brilliance” who was able to preach the Gospel to people in all stages and conditions of life.

Archbishop Sheen died in 1979 at age 84. His sainthood cause was officially opened in 2003. The church declared his heroic virtues and he was given the title “Venerable” in 2012 by Pope Benedict XVI.

Since the transfer of Archbishop Sheen’s remains to St. Mary’s Cathedral in Peoria on June 27, a steady stream of pilgrims have come to pray at his new tomb, located in front of an icon of Our Lady of Perpetual Help. The cathedral is open to visitors Sundays from 9 a.m. to 2 p.m., Monday through Friday from noon to 2 p.m., and Saturdays from 3 p.m. to 6 p.m.

News about the beatification and the life of Archbishop Sheen can be found at CelebrateSheen.com. After the date of beatification is established, the site will include instructions for obtaining tickets.