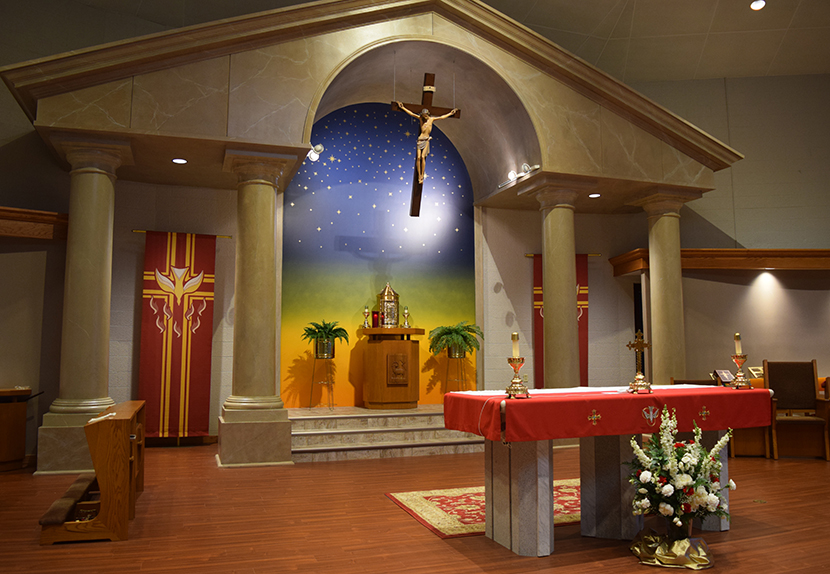 The redesigned back wall of the sanctuary at St. Anne Church in East Moline includes a new canopy over a raised tabernacle. The new painting behind the tabernacle symbolizes that God is to be praised day and night. (The Catholic Post/Tom Dermody)

EAST MOLINE — After three months away, members of St. Anne Parish here are in “the Promised Land” of a beautifully renovated church and ready to joyfully conclude a yearlong celebration marking 100 years since the parish’s founding.

“Spiritually, I kept telling people we were like the Israelites in the desert,” said Father Antonio Dittmer of the period from early January through Lent when St. Anne parishioners gathered for weekend Masses at two neighboring churches while interior work was being done on their 66-year-old church. “But the Promised Land is in sight,” Father Dittmer reminded his flock. 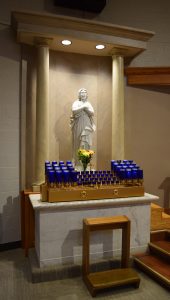 Smaller canopies were added over the devotional altars to Mary (pictured) and St. Joseph. (The Catholic Post/Tom Dermody)

And on July 28, the renovated church will be in the sight of many when the parish hosts Bishop Daniel R. Jenky, CSC, and other guests for a 10 a.m. Centennial Mass. The liturgy, which will be followed by a luncheon, caps 14 months of centennial activities centered on the theme “Remember, Rejoice, Renew.”

There has been much rejoicing at the renewal of the church interior since St. Anne reopened on Palm Sunday weekend.

“A lot of people had seen the renderings on display,” said Michael McNeil, a member of the parish’s centennial committee who also served as architect for the redesign. “But the feeling they got when they actually witnessed it was much more impressive.”

That’s because the three-dimensional aspects brought to the curved back wall of the sanctuary can now be fully appreciated, including:

A change in color schemes is also immediately noticed. The orange carpeting that had served the church since its last remodeling in the mid-1980s has been replaced with a neutral shade. The white walls have been painted a light taupe. The new colors and accent lighting give the church a warm, comfortable feel, said McNeil.

Sound system improvements including both new and refurbished speakers enhance the spoken word and music, and the pews have been refinished.

“I think we got the most out of our money,” said Father Dittmer. The project had a budget of $175,000 using funds raised in a centennial drive. Noting that’s a small sum for renovation work, Father Dittmer said “we wanted to maximize the visuals.”

A YEAR OF CELEBRATIONS

Father Dittmer credited Father Fredi Gomez Torres, who he succeeded as pastor in 2017, for his vision in organizing a centennial committee early. He called the 15-member committee “a finely tuned machine” and praised the organization and work of its members. 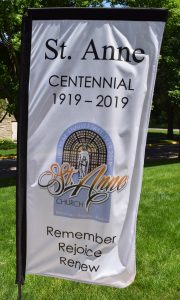 An outside banner shows the centennial year logo and theme. (The Catholic Post/Tom Dermody)

The centennial observance opened with a Mass and dinner on April 15, 2018, kicking off a “Year of Celebrations” that has included a fiesta, parish picnic, the creation of commemorative items, and the revival of a St. Patrick’s Day celebration.

On June 8, St. Anne hosted Catholic radio host Gus Lloyd for a Day of Reflection on the topic of “Amazing Grace.”  The parish is now in “100 Days of Prayer” utilizing daily quotes, proverbs, and novenas leading to the July 28 celebration, which comes two days after the Feast of St. Anne. And the century-old faith community will have a float in East Moline’s Fourth of July Parade that passes a block from the church.

Parishioners have been kept informed of centennial activities, including progress on the church renovation, through dedicated pages on the St. Anne website as well as a newsletter called “The Centennial Scoop.”

St. Anne was established in 1919 to serve a diverse population in East Moline, with Father William Cleary assigned by Bishop Edmund M. Dunne to be the founding pastor. He would lead the community for 50 years.

The first Mass was celebrated in the Lyric Theater on Seventh Street on the third Sunday of May 1919. Ground was broken for a combination church and school that year and was dedicated by Bishop Dunne in November 1920.

Five Sisters of Charity of the Blessed Virgin Mary came in 1925 to staff the school, which continued to grow. A new church became necessary and construction for the current church and rectory began in March 1951. Mass was celebrated in the new building on Easter Sunday in 1952. 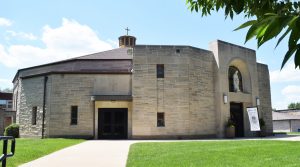 More than 100 Sisters of Charity BVM have served the school and parish, as well as three Sisters of the Congregation of the Humility of Mary. Currently one Benedictine from St. Mary Monastery in Rock Island, Sister Stefanie MacDonald, teaches at the school, now known as Our Lady of Grace Catholic Academy.

There have been 15 pastors and 13 parochial vicars over the years.

All former pastors, clergy, Sisters, and vocations that have come out of the parish have been invited to attend the July 28 centennial celebration.

Among the former pastors present will be Father Dittmer, who on June 12 relinquished duties as pastor of St. Anne and is now solely pastor of St. Mary Parish in Moline. Leading the centennial celebration will be Father James Pallardy, who has been parochial vicar for the past year and was recently named pastor by Bishop Jenky.

Reservations are required for the catered luncheon at Cleary Hall that follows the Centennial Mass. A display of parish history will be set up in the hall.

Father Dittmer thanked the parishes of St. Mary in Moline and Our Lady of Guadalupe in Silvis for hosting weekend Masses for St. Anne at their churches during the church remodeling. 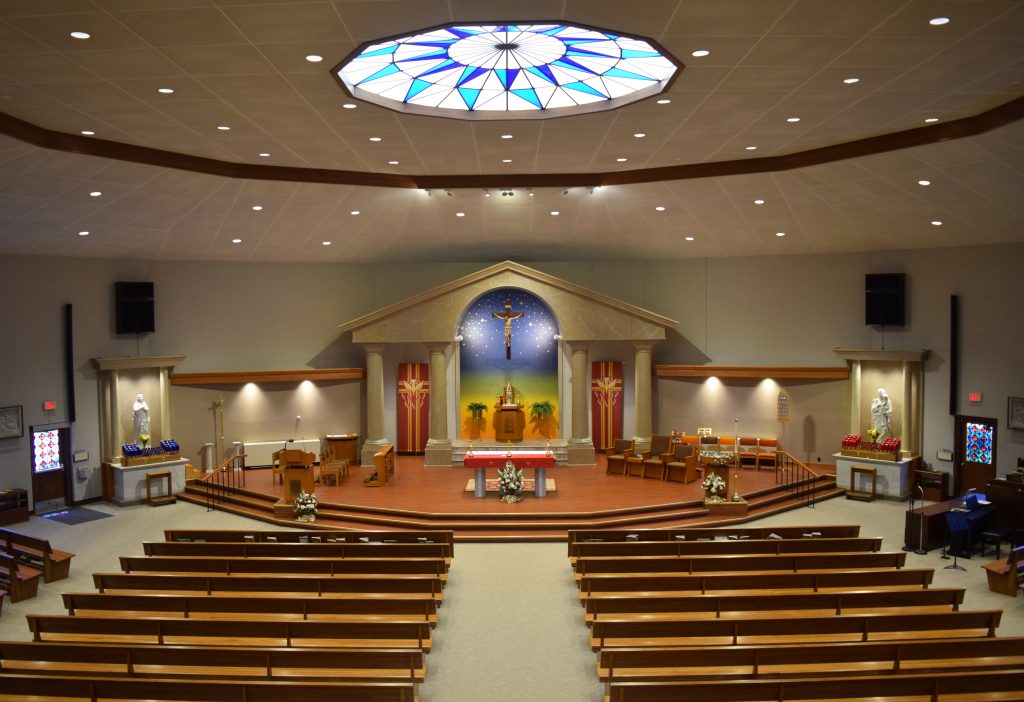 A photo from the St. Anne Church choir loft shows the renovated sanctuary, new carpeting, and the skylight whose former orange panels were replaced with shades of blue. (The Catholic Post/Tom Dermody)