Sixteen hits and 14 runs led to Marquette Academy’s baseball team being Number One in the state on Saturday.

But the Crusaders’ historic 14-5 win over Waterloo Gibault in the Illinois High School Association Class 1A title game at Dozer Park in Peoria had meaning well beyond numbers. 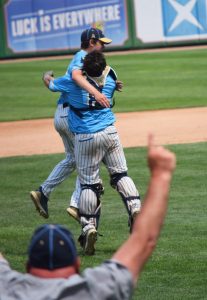 When relief pitcher Luke Couch struck out Gibault’s Preston Oberkfell for the final out, it unleashed a torrent of joy as the school and its supporters celebrated Marquette’s first state championship in any sport at the high school level.

Couch leaped into the arms of catcher Jay Scott. The dugout emptied and players piled on one another on the infield. As team members lined up to receive their trophy, head coach Todd Hopkins turned to cheering fans and let out a couple of mighty roars.

“I’m so happy for the school,” said Hopkins, who has coached the Crusaders for 22 seasons. This was the third time in his tenure the team reached the state finals, finishing fourth both in 1999 and one year ago.

“It’s so awesome for all our fans,” Hopkins said of the team’s 33-1 season capped by the state championship. “And it’s great to see it end this way for the seniors.”

TIED RECORD FOR MOST HITS

One of those seniors, right fielder Jack Snook, put on a hitting clinic in the state finals.

In Friday’s 10-8 semifinal win over Elgin Harvest Christian Academy, Snook was 4-for-5 with three runs batted in. In Saturday’s title game, he was 3-for-4, including a two-run homer that opened the scoring in an eight-run second inning that broke the game open.

While Snook had hit only one home run during the season, he knew this one was gone the minute the ball left his bat and began its flight over the left field wall at Peoria’s downtown minor league ballpark.

“I’ve been playing sports my whole life,” said Snook, an all-state athlete in football and basketball, “and I don’t think there’s a better feeling than that feeling off the bat.”

“Today we came out and hit better than I’ve ever seen a Marquette team hit,” said Coach Hopkins.

WINNERS ON, OFF THE FIELD

“We’re just so excited,” she told The Catholic Post as she left the field following the post-game awards ceremony. “This is our first state championship in any sport at the high school level. And our grade school boys won state in baseball this year. It’s surreal! ” 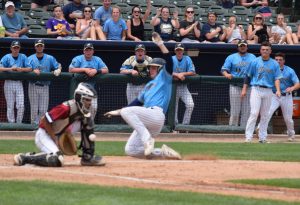 Marquette Academy’s Evan Green slides safely into home after a hit by Nate Melvin during an eight-run second inning that gave the Crusaders the lead for good in their state championship win. (The Catholic Post/Tom Dermody)

“Surreal” was also how the state championship was described by Sandy Kotek, athletic director.

“I keep pinching myself,” she said three days later. Kotek recalled that, in addition to the previous state final trips by the baseball team, Marquette’s basketball team got second at state in 1974 and the football team finished second in 1984.

So Saturday’s celebration on the field was just the beginning. On its way back to Ottawa, the team bus was met outside of town by the Grand Ridge Fire Department. In the city they were joined by not only the Ottawa Fired Department but trucks from the Naplate and Wallace departments as well.

The parade eventually led to the Marquette gym, where team members were introduced and stories shared. The night officially ended with a pizza celebration at the Knights of Columbus hall.

Rick described the team as “an awesome group of guys.”

“They all respect (Coach Hopkins) so much and work so hard for him,” said Rick. “He does such a great job with the program. Each year the kids come out and they’re competitive and they work so hard. And each year we’ve gotten closer and closer and so to finally get a state championship is huge for the team and the school.”

This team had all the championship ingredients.

“They’re tough kids who got a little bit of a taste of success last year and they love the limelight,” said Coach Hopkins. “They’re close-knit. They want to win. They’re competitors. You want to go to battle with them.”

“We’re disciplined,” said Snook. “We love each other and never give up. There’s no quit in us.”

Father Corey Krengiel, school chaplain, knows the team well and calls them “a great group of kids on the field and off the field.” Two team members, Snook and Couch, were received into the Catholic Church at this year’s Easter Vigil.

“They’re good leaders and good models in our school,” said Father Krengiel. “The senior class has a special bond. It’s great to see.”

Marquette Academy players, coaches, and school officials pose for a team photo on the field of Dozer Park in Peoria after winning the first state title in the Ottawa Catholic high school’s history June 1 with a 14-5 victory over Waterloo Gibault to claim the IHSA 1A baseball championship. (The Catholic Post/Tom Dermody)