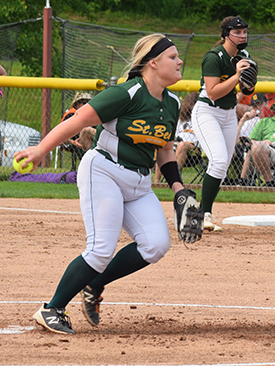 The third place finish is the highest ever for a girls team at St. Bede.

And the Lady Bruins won their final game of the year despite not getting a hit against Calhoun pitcher Sydney Baalman.

Senior shortstop Maggie Sons led off the seventh inning with a walk and became the Bruins’ first baserunner. She then stole second and went to third on a throwing error. Claire Morrow then reached first on a fielder’s choice, stole second, and — two outs later — both Sons and Morrow came home to score on a Calhoun error after Ellyn Nowakowski’s bunt.

St. Bede pitcher Abbie May did the rest, holding Calhoun scoreless. May allowed six hits while striking out 11 batters and walking none. 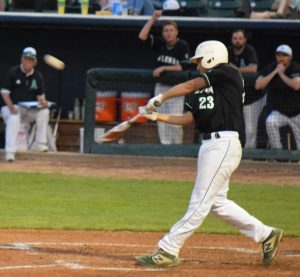 Alleman’s Zach Carpita connects during the Pioneers’ Class 2A state semifinal game at Dozer Park in Peoria on Friday. (The Catholic Post/Tom Dermody)

The Lady Bruins’ championship hopes had ended the previous day with a 5-1 loss to Glasford Illini Bluffs. St. Bede, coached by Rob Ruppert, finished the season with a record of 20-9.

Meanwhile, Alleman High School of Rock Island finished fourth in Class 2A baseball. The Pioneers advanced to the state finals at Dozer Park in Peoria before dropping a 7-2 semifinal contest to eventual state champion Teutopolis.

The Pioneers, who finished with a record of 27-15, are coached by Jerry Burkhead. At a welcome home celebration in Don Morris Gymnasium, Alleman athletic director Joe Conklin told the team “I don’t care whether the plaques say first, second, third or fourth. You will always be champions for life.”