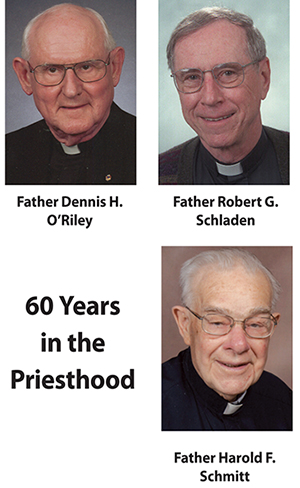 Talkative, happy and feeling blessed, three senior priests of the Diocese of Peoria are celebrating the 60th anniversary of their ordination in 2019.

The jubilarians are Father Dennis O’Riley of Danville, Father Robert Schladen of Cuba, and Father Harold Schmitt of Henry.

Father Schmitt, who studied for the priesthood at the Pontifical College Josephinum in Ohio, was ordained there on May 30, 1959, by Archbishop Egidio Vagnozzi, apostolic delegate to the United States.

Father O’Riley and Father Schladen were ordained on Aug. 2, 1959, at St. Mary’s Cathedral in Peoria. Their ordinations were delayed because the Diocese of Peoria was between bishops at the time — Archbishop William E. Cousins had been named to lead the Archdiocese of Milwaukee on Dec. 17, 1958, and Bishop John B. Franz was not installed until Nov. 4, 1959.

Archbishop Cousins was given permission to return to central Illinois to ordain Father O’Riley and Father Schladen.

Click on their names for brief biographies for Father O’Riley, Father Schladen and Father Schmitt, including their assignments and celebration plans.

EDITOR’S NOTE: — These stories were part of the 16-page special section “Jubilarians 2019” published in the May 26 issue of The Catholic Post. To view the section in full, visit our e-edition.