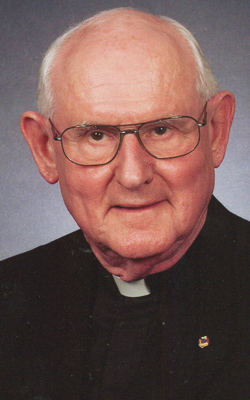 DANVILLE — The idea of priesthood came in about the second grade for Father O’Riley. Born in Chicago and raised in Danville, he remembers being an altar server, helping out around St. Patrick Parish as needed, and having Father Raymond Lassuy, parochial vicar and Scoutmaster, visiting the O’Riley house on a regular basis.

He also laughs as he talks about his “appointment” as the first janitor at the new Schlarman High School when Father Frank Cleary recruited him to clean up the mud and other debris tracked in by students as construction continued.

When his mother, Irma, died between his junior and senior years, it “upset the apple cart” and he put aside thoughts of the priesthood. A member of Schlarman’s first graduating class in 1949, he went on to study mortuary science and worked as a funeral director.

It was another death, this one of a young priest killed in a car accident, that helped him to revisit the idea of priesthood.

Father O’Riley served as the funeral director and remembers hearing Bishop Joseph Schlarman say during his homily, “Somebody is going to have to take his part.”

He visited his pastor and it wasn’t long before he was sent to St. Bede Junior College in Peru. After two years there, he completed his studies for the priesthood at St. Paul Seminary in St. Paul, Minnesota.

Most of his ministry has been in the eastern part of the Diocese of Peoria.

Father O’Riley was parochial vicar at St. Columba in Ottawa and St. Malachy in Rantoul, before being named pastor at Sacred Heart in Farmer City and St. John in Bellflower in 1971. His next move took him back to St. Patrick in Danville in 1974, where he worked to combine St. Patrick and St. Joseph to form Holy Family Parish.

Since both churches were falling apart, they were demolished and the church for the new parish was built on the site of the former St. Patrick Church.

“I salvaged the bells out of both of them and got another bell from the old LaSalette seminary south of here. Those are in the tower of Holy Family,” Father O’Riley said.

Father Robert Hoffman was co-pastor and served as the “idea man” while Father O’Riley dealt with the contractors, architects and the money. One item he didn’t budge on was getting a pipe organ and he counts that as a blessing.

Ready for less administrative duties, he was sent to Holy Cross in Champaign as parochial vicar in 1984. He served as pastor of St. Patrick in Tolono and St. Charles Borromeo in Homer from 1988 until being granted senior status in 2001.

Father O’Riley moved to the Indianapolis area to be near his family for a time, but eventually returned to Danville. He continues to concelebrate Mass at Holy Family and assists at OSF HealthCare Sacred Heart Medical Center.

“When I think of the sacraments and reconciliation, the baptisms, the weddings. . . . These are blessings and I’m so blessed to be able to keep on doing it,” he told The Catholic Post.

Father O’Riley and Father Steven Loftus, pastor at Holy Family in Danville, often celebrate their ordination anniversaries together since the dates are within one day of each other. They are looking at having a Mass and luncheon in August.