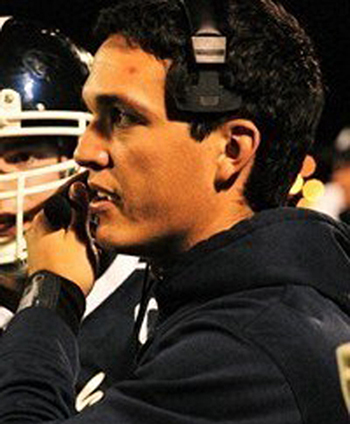 Peoria Notre Dame alumnus and coach Sean Gillen went into cardiac arrest on May 6 and died this weekend. He made it possible for others to live by donating his organs through Gift of Hope. (Photo/Peoria Notre Athletics)

In life, Sean Gillen was joyful, determined and generous, and that didn’t stop after his death on May 11.

The Peoria Notre Dame graduate and assistant coach made the decision to help others by being an organ donor. On Saturday afternoon, a purple flag bearing the logo of Gift of Hope was raised in his honor outside the entrance to OSF HealthCare Saint Francis Medical Center in Peoria and was to remain flying for three days.

Gillen’s family, girlfriend and friends were joined by members of his Peoria Notre Dame family in the seventh floor conference overlooking the flagpole to “accompany Sean into the embrace of his eternal Father.”

Tears were flowing freely and emotions running high as the students held on to one another and their principal, Sister Sara Kowal, SCTJM, but Father Kyle Lucas, school chaplain, said it was a blessing to be together, and he invited them to be “radically real” with God.

“These are the moments when we can let our hearts turn out to him in everything we can humanly imagine: in the gift of hope, with the gift of vision that is eternal, with anger, with anxiety and frustration,” Father Lucas said. “Everything that is human, this is a moment that we can bring it before God.”

The Peoria Notre Dame family had been storming heaven with prayer since May 6, when Gillen collapsed while working at his gym. Sister Sara and Father Lucas started a novena, encouraging people to seek the intercession of Venerable Archbishop Fulton J. Sheen, and they lifted up their coach in prayer again on May 10 as the school gathered for a Mass and May crowning. 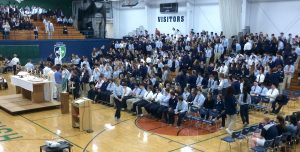 Peoria Notre Dame students remembered Coach Sean Gillen in prayer during an all-school Mass on Monday. He suffered cardiac arrest on May 6 and was removed from mechanical support May 11 after it was determined that he had irreversible brain damage and would never recover. (The Catholic Post/Jennifer Willems)

Gillen’s family said in a statement that he received emergency care as soon as possible after he collapsed and was taken to OSF Saint Francis, but did not respond to treatment.

“To everyone’s disappointment and sadness we were informed that Sean sustained irreversible brain damage from lack of oxygen and will never recover,” the statement continued.

He was removed from mechanical support and declared dead at 10:40 p.m., on May 11, according to Peoria County Coroner Jamie Harwood. An autopsy revealed that Gillen had “a sudden cardiac death related to a heart arrhythmia.”

“To those that know him, it is no surprise that he chose to donate his organs and help save another life,” the Gillen family said in their statement. “Sean’s courage and generosity will be his final gift.”

Students and friends filled the hallways of OSF Saint Francis again on Saturday evening when Gillen was taken on an “honor walk” from his room to the operating room to fulfill his wishes.

Gillen, 32, graduated from Peoria Notre Dame in 2005 and received a degree in exercise science from Monmouth College in 2009. It wasn’t long before he returned to his alma mater to coach football, first as an assistant coach and then head coach.

He led the team to the playoffs during the 2016 and 2017 seasons. Even after he resigned as head coach in early 2018 to give his full attention to his business, KG Performance, he stayed on as an assistant coach for football and men’s track and field.

“For us, that was fortunate,” said Matt Blackford, athletic director at Peoria Notre Dame. “He was a great coach, a great guy. The kids loved him.”

Blackford said the thing he always admired about Gillen is how fair he was.

“He was completely calm all the time — nothing ever ruffled his feathers,” Blackford told The Catholic Post. “He motivated by just holding kids accountable . . . and they respected that, they did. And they performed well for him.”

In addition to serving as the strength and conditioning coordinator for football, Gillen helped train cheerleading and the track teams.

“He was just so knowledgeable that a lot of other teams reached out to him in that regard,” Blackford said. “He was willing to help.”

Gillen’s death comes just three months after the unexpected loss of principal Randy Simmons. At an all-school Mass on May 13, Sister Sara said, “A lot of us are asking in our hearts, ‘Why are these things happening? What is going on?’”

Praying the night before, she asked Mary, “What would you tell your children now?” and said the Blessed Mother immediately placed these words on her heart: “Tell them don’t lose hope and trust in Him. There’s a greater plan here than we can now see. Trust Him.”

“That’s hard,” she continued, “because it requires death and suffering, but that’s what the Lord does. He enters in and brings forth life . . . He entered into the midst of our misery and through his own death, he brings life.”

In his homily, Father Lucas asked the students to remember Gillen and honor a “life well lived” by allowing the risen Christ to be tangible in everything they do and say. That could be as simple as respecting the dress code, saying a kind word to someone, being engaged in class, or just picking up a piece of trash in the commons.

“These are ways that we are united in mind and heart,” he said, and proclaim to others, “I will make the voice of Christ heard.”

Before the students returned to class, Sister Sara asked them to reach out if they needed to talk to someone, saying, “We are here for one another.”

She told The Post that she was grateful for everything Gillen did, and thought this “good, honorable, noble man” would continue to be a role model for the students.

“He inspired them. He pushed them in a really good way and gave them confidence, too,” she said.

A Mass of Christian Burial is planned for Saturday, May 18, at 11 a.m. at St. Jude Church, 10811 N. Knoxville Ave., in Peoria. Visitation will be held one hour before.

Cremation rites will be accorded following the Mass.

Gillen was born on March 2, 1987, in Mountain Home, Idaho. He is survived by his mother, Olivia O. Wertz-Gillen of Peoria; his brothers, Stuart H. (Sandra) Wertz of Colorado Springs, Colorado; and Seth Gillen of Fort Benning, Georgia; four nieces and nephews; and his girlfriend, Jodi Stumbaugh.

He was preceded in death by his father, Robert J. Gillen.

Memorials may be made to the Peoria Notre Dame Scholarship Fund.