BLOOMINGTON — Stephanie Adams saw the movie “Unplanned” and felt a call to do something to support the pro-life effort.

“The Holy Spirit took over my heart,” said Adams, who is active in “Alpha,” an evangelization outreach at the Bloomington-Normal Catholic parishes.

When Adams learned shortly after seeing the movie that a Protest Planned Parenthood candlelight prayer vigil would be taking place in Bloomington on April 13 as part of a nationwide effort, she knew that was a first step. 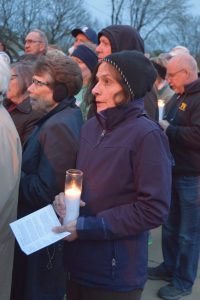 Amy Christensen, who helped begin the Sanctity of Life Committee at Epiphany Parish in Normal, prays during a candlelight vigil outside Bloomington’s Planned Parenthood on April 13. (The Catholic Post/Tom Dermody)

So she joined more than 100 people on the sidewalk along busy Veterans Parkway in praying the rosary outside Planned Parenthood’s Bloomington Health Center. The local vigil, sponsored by the Sanctity of Life Committee at Epiphany Parish in Normal, was one of nearly 150 vigils that took place in 38 states, according to the #ProtestPP Coalition.

The coalition — comprised of various state and local pro-life groups — notes that Planned Parenthood is the nation’s largest abortion provider.

“It’s important to witness to life in our country,” said Beatriz Torres of St. Mary Parish in Bloomington. Noting that abortion “is not health care,” Torres said “I choose to be on the side of life and hope.”

“The pro-life cause is something we live and breathe,” she told The Catholic Post. “It’s extremely important for youth to be a part of the pro-life movement.