Tracing the history of the Catholic Women’s League is like getting a glimpse of the last 125 years in central Illinois — and the United States.

It started with a small group of women who came together on Feb. 20, 1894, “to sew and see what could be done for those who needed help in the community.” The first president was Mary Spalding, sister-in-law of Bishop John Lancaster Spalding, the first ordinary of the Diocese of Peoria.

“The women couldn’t vote. The women didn’t have cars. There were no airplanes. There were no cellphones. There was none of this, and yet they accomplished all that they did. They became a force for good,” said Gail Kruse of Chillicothe, the league’s secretary. “That amazes me.”

The Catholic Women’s League’s 500 members have been observing their anniversary in small ways since the installation of officers last June, with the fall fundraiser in September, the Christmas brunch in December, and a “Dinnerless Dinner” in January. The regular monthly rosaries for recently deceased members have also given them a way to remember the people who have helped to carry on the league’s work.

There will be a day of reflection, Mass and annual meeting on April 9 (see the related item below), and the annual Allocation Luncheon is planned for Tuesday, May 14, at the Spalding Pastoral Center in Peoria. The guest of honor will be Bishop Daniel R. Jenky, CSC.

“Our purpose is for charity, worship and love, and the Allocation Luncheon is the culmination of all three,” said president Beth Bussan.

Last year the group awarded $17,000 in grants to 14 organizations that serve people in central Illinois, and Bussan said she looks forward to offering that support again this year.

“All of them are in line with the type of mission that we’ve had almost since day one,” she told The Catholic Post.

MANY NEEDS, ONE MISSION

Among the first entries in the history of the Catholic Women’s League was that the group made bandages and sent jelly to those wounded in the Spanish-American War. Kruse explained that the Red Cross requested this specifically so the men on the front lines would have fruit. 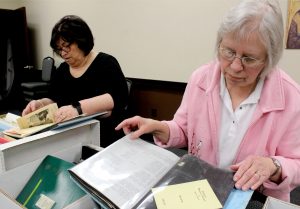 Vicki Rocke and Gail Kruse comb through files for the Catholic Women’s League to gather facts for the organization’s 125th anniversary celebration in May. (The Catholic Post/Jennifer Willems)

They formed the St. Josephine Sewing Society to sew and crochet baby clothes and make baby quilts. Named for Josephine Cashin, who hosted the sessions in her third-floor ballroom, “The Josephines” had 22 sewing machines on one end of the room and quilting frames and materials on the other.

Members also taught sewing and cooking at Neighborhood House in Peoria, and then opened a day nursery for the children of working mothers.

“During World War I we sold Liberty Bonds. Then there were war bonds for World War II,” Kruse said.

“In 1929, we received a donation of 2 and a half ounces of pure gold. We wondered, how much was that worth? The United States was on the gold standard then,” she explained. “So we learned our American history while we were doing this.”

In addition, the Catholic Women’s League supported Catholic Social Services during the Depression, hosted scrap drives, donated rooms to St. Joseph’s Home for the Aged and St. Francis Hospital in Peoria, sponsored ward parties for patients at the Peoria State Hospital, and formed “The Marillacs” to volunteer for various agencies and drive children and their mothers to the doctor.

In recent years, they assisted with the establishment of Elizabeth Ministry, which offers support to women and their families during childbearing years, and donated money to Life Flight.

“They progressed through what the needs were in the Peoria area,” Bussan said. “They tended to be local needs or, with the Spanish-American War, for example, someone was involved in some way and brought that to their attention. It was always, ‘OK, what do you need?’” 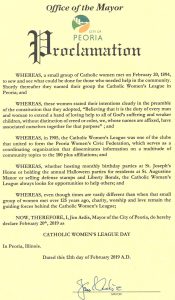 To honor the group for being attentive to those needs for 125 years, Peoria Mayor Jim Ardis declared Feb. 20, 2019, to be Catholic Women’s League Day in the city. He presented the proclamation to Bussan at the Feb. 12 meeting of the Peoria City Council.

Kruse noted that when the Catholic Women’s League started in 1894, there weren’t the same kinds of charitable organizations that exist now. The founders sought to fill the gap by providing “hands on” service.

“Now others are doing the ‘hands on’ work, but our members are supporting the organizations doing that,” Bussan said.

Membership in the Catholic Women’s League is open to all Catholic women living in Peoria and surrounding communities. The annual dues are $10. For more information, send email to cwl.peoria@gmail.com.

Sr. Diane to speak at CWL Day of Reflection on April 9

WEST PEORIA — Sister Diane VandeVoorde, OSF, will be the speaker at a day of reflection planned by the Catholic Women’s League for Tuesday, April 9. Part of the CWL’s 125th anniversary celebration, it will be held at Immaculate Conception Convent, 2408 W. Heading Ave.

The day will begin with a Mass for all deceased members at 9 a.m. The celebrant will be Msgr. James Kruse, vicar general for the Diocese of Peoria.

A rosary and luncheon will follow. The Catholic Women’s League will also have its annual meeting during the gathering.

The cost is $12 per person and the deadline for reservations is April 2.