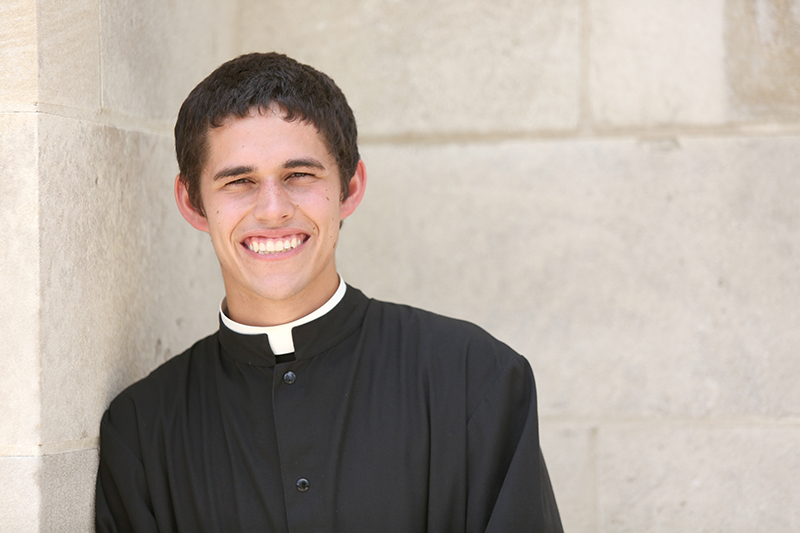 Nicholas Conner tried to ignore it, but God’s call to explore the priesthood wouldn’t go away.

“In moments of prayer and contemplation, that’s how it would always come back,” said the Peoria native and graduate of Holy Family School and Peoria Notre Dame. “I could never shake it.”

Now he doesn’t want to.

Accepted as a seminarian for the Diocese of Peoria last year, he is happily ensconced at Mount St. Mary’s Seminary in Emmitsburg, Maryland, as a member of the Class of 2024. Other members of the class, all engaged in their first year of pre-theology studies, are: Thomas Anderson of Roanoke, Michael Best of Peoria, Marko Culjak of Skokie, and Jacob Martini of Ottawa.

“I have been very at peace with the decision to come to seminary,” Conner recently told The Catholic Post. “It was something I struggled with for a long time, so to get here and be immersed in the community with so many great guys . . . learning from them and committing myself to a life of prayer and study, so far it’s been incredibly fulfilling.”

The idea of priesthood would come up once in a while during his years at Peoria Notre Dame and after graduating in 2014, Conner went on to Illinois Central College to give it some more thought as he earned an associate degree. He would complete his degree in finance at Illinois State University.

Still not certain about the priesthood, he was considering a career in financial planning. “I knew I wanted to help people and I felt like I could make an impact doing that,” he said.

“It was something I struggled with for a long time, so to get here and be immersed in the community with so many great guys . . . learning from them and committing myself to a life of prayer and study, so far it’s been incredibly fulfilling.” — Nicholas Conner

It was that desire to help others that also played a role in his discernment, as did his time at the St. John Paul II Catholic Newman Center at ISU. Attending daily Mass, spending time in eucharistic adoration, and praying the rosary, Conner also started talking to Msgr. Gregory Ketcham, Father Tim Hepner and Father John Steffen.

“All three of them made a huge difference for me,” he said. “In my last year, Father Steffen was our chaplain and he had the biggest impact in my discernment. I would serve daily Mass with him. He’s a tremendous homilist; I learned a lot through his homilies.”

Father Steffen’s witness as a diocesan priest also inspired Conner, who found himself meeting frequently with Father Hepner, diocesan vocation director of recruitment. Degree in hand, he worked at Pekin Insurance for a year to pay off his student loans and began the application process to be a seminarian.

“It wasn’t a quick decision. It was over time, more gradual, getting more comfortable with the idea,” Conner said. “Then I started to desire it and get more excited about it.”

Conner’s life at Mount St. Mary’s includes two philosophy courses, a review of the Catechism of the Catholic Church, and a class in Latin, as well as Mass, morning and evening prayer, a daily Holy Hour and rosary. There’s also time for socializing, sports and just hanging out, he said.

The seminarians from the Diocese of Peoria make it a practice to have breakfast together each morning as a way of building community.

He is also connected to central Illinois by the assurances of prayer he receives and the cards and letters sent to him by students in diocesan schools. Before Christmas, a class at Holy Family School in Peoria made and sent angels that he put up around his room, and the students at Immaculate Conception School in Monmouth remembered him with cards at Valentine’s Day.

“Just receiving mail from people is nice because it reminds you why you’re here,” Conner said. “We’re here so we can go back home and minister there.”

Prayers are welcome for the seminarians, he said, but they’re needed for the men and women who are still exploring their vocations in colleges and Newman Centers, too.

EDITOR’S NOTE: To get information on all of the seminarians who are studying for the Diocese of Peoria or the address of their seminaries, visit comeandfollowme.org or contact Amy Chovan, coordinator of the Office of Priestly Vocations, at (309) 671-1550 or achovan@cdop.org.

This story was part of “Vocations 2019,” a special section published in the March 17 edition of The Catholic Post.