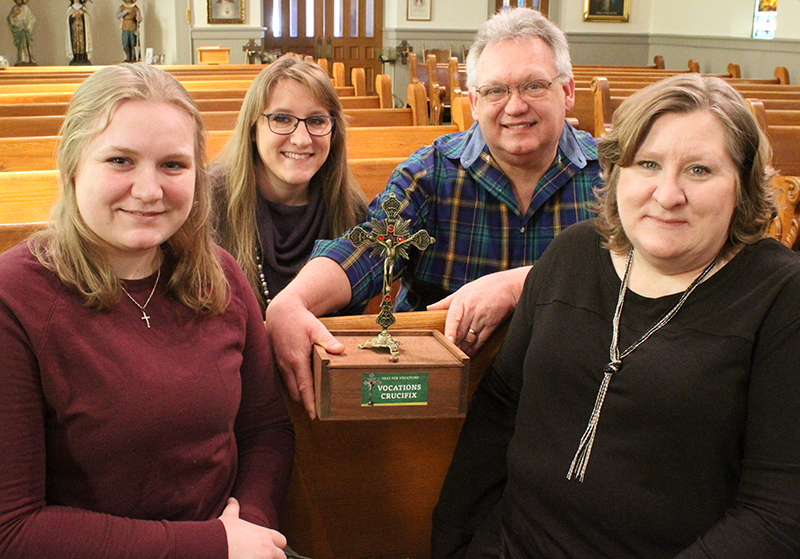 Clint Martens holds the Traveling Vocations Crucifix that has been hosted in his family's home on several occasions since Vocatoin Awareness Week last November. With him and wife Judy are their daughters Claire Martens (left) and Abby Davis of Atwood. (The Catholic Post/Jennifer Willems)

WAPELLA — It comes as no surprise to the members of St. Patrick Parish here that there is a need for more vocations to the priesthood and religious life.

For many years, the lively little parish in De Witt County had a resident pastor, who also served as chaplain at Central Catholic High School in Bloomington. Since 2017 they have been led by Father Jeffrey Stirniman, who lives in Bloomington and is pastor of Holy Trinity and Historic St. Patrick Parish, too.

Even with the help of Father Geoffrey Horton, parochial vicar and chaplain at St. John Paul II Newman Center in Normal, and Father Henry Ogu, who is assisting while he pursues a master’s degree and doctorate at Illinois State University, a great deal of coordination is required.

Parishioners are doing more than being flexible and stepping up in every way they can, however. Since November they have been hosting a Traveling Vocations Crucifix in their homes, one family at a time.

“You don’t realize how good you have it until you don’t, until you’re without a resident priest. They only have so many hours in the day,” said Pam Elliott, who heads up the parish’s vocation efforts with her husband, Joe. “So the intention is praying for priests and religious, especially from our own parish.”

Designed by Serra International, the crucifix comes in two pieces that are easily assembled. The wooden box in which it travels has room for prayer cards and a brochure that offers suggested themes and prayers for each weekday:

Pam Elliott said Saturday and Sunday are left open for families to pray as they wish.

After Mass on Sunday morning, a family takes the Traveling Vocations Crucifix home and returns it to the gathering space at St. Patrick before Mass the following week so the next family can pick it up.

“It doesn’t take five minutes,” Elliott said of the time required for the prayers once the crucifix comes home. “It’s so simple, and yet it’s important.”

Judy and Clint Martens were the first family to take the Traveling Vocations Crucifix and they’ve had it several times since then. They set it up in their living room and once a day they gather whoever is at home to say the prayers.

“I thought this was a great idea,” said Judy Martens, an extraordinary minister of Holy Communion and rosary leader at St. Patrick. “We’re all very concerned about vocations — everybody’s vocation, but mainly that we have enough priests and religious.”

“I think this helps make families aware of the vocations crisis and helps families come together to pray and maybe open up the dialogue with the family, too,” Judy said.

Claire Martens, a senior at Heyworth High School who teaches the third grade religious education class at St. Patrick, said she appreciates the litany of saints for various vocations that is suggested for Wednesday. It inspired her to learn more about the saints and thinks it helps others to do the same.

When it comes to vocations, the Martens family walks the talk. Claire is considering religious life and sons Grayson and Grant have attended Emmaus Days, a vocation awareness program sponsored by the Diocese of Peoria.

Father Stirniman supported the Traveling Vocations Crucifix not only at the Wapella parish, but also at Holy Trinity in Bloomington. There is a Traveling St. Therese Tapestry at Historic St. Patrick, which essentially serves the same purpose, he said.

St. Therese of Lisieux is the patroness of vocations for the Diocese of Peoria.

He said the traveling crucifixes and tapestry are “invaluable” for all three parishes.

The first reason is because it makes families aware of the need to pray for vocations to the priesthood, religious life and permanent diaconate, he explained.

“Two, it reminds them of the importance of prayer in more general terms,” Father Stirniman said. “And three, it gets them praying together, taking time to spend with each other in the most important and effective ways they can spend time together as a family.”

He noted that throughout his priesthood he has offered prayers for vocations at every weekend Mass he has celebrated.

“My promotion of the traveling items with families is but an extension of what I’ve tried my best to model at every weekend Mass,” Father Stirniman said.

EDITOR’S NOTE: This story was part of “Vocations 2019,” a special section in the March 17 issue of The Catholic Post.