DANVILLE — If winning was the only goal of the Schlarman Academy girls basketball team, then the Hilltoppers’ repeat state championship earned last Saturday at Redbird Arena in Normal would be the latest in a long line of historic ways they achieved it.

After all, the seniors on this talented squad never lost a home game in four years of high school play, and never lost a conference game period. 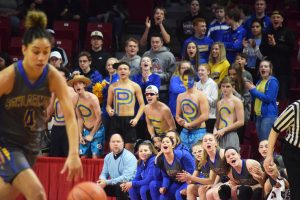 The Schlarman bench and fans cheer as Capria Brown drives down the court following a steal during the Hilltoppers’ 18-2 run to open the championship game against Eastland. (The Catholic Post/Tom Dermody)

Their 62-36 win over Lanark Eastland on Feb. 23 was their second consecutive IHSA Class 1A state title. The Hilltoppers’ 33-2 record boosted their overall four-year total to 114 wins and just 11 losses.

“We work so hard,” said leading scorer Anaya Peoples, a senior who will continue her basketball career at the University of Notre Dame. “Our legacy is a group of girls who came together and had a goal and worked for it.”

But one of their biggest fans — Father Bowan Schmitt, a school chaplain who regularly prays with and for the team — says this squad has other goals, including “to play for the glory and honor of God.”

“The girls’ faith is important to them,” said Father Schmitt, who is also pastor of St. Paul Parish in Danville. He told The Catholic Post that “they all have a strong sense of the many blessings that God has given each of them” and that “their Christian faith is a noticeable trait you see within them.”

Father Schmitt, who sat on the bench for the state finals — which also included a 58-41 win over Lewistown in the semifinals on Friday — credits head coach Keith Peoples and his assistants for helping the team to not only be victorious in basketball, but in life.

“Our coaches are intent on helping our girls form and mold their character in and through the time they spend with them,” said Father Schmitt, helping them grow in virtues including self-control, discipline, perseverance, fortitude, sportsmanship, humility, kindness, excellence and patience.

“Winning? That’s great,” said Coach Peoples after Saturday’s championship game. “The life lessons learned throughout the challenges? That means more to me.” 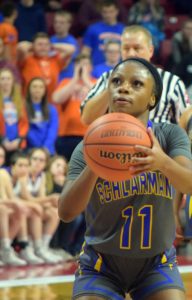 He said the team’s four seniors — including his daughter, Anaya, as well as Sydney Gouard, Janiah Newell, and Destiny Dye — “have matured immensely in the last four years.”

“It’s an unselfish maturity, and that’s what I take pride in,” he said.

LOYALTY LEADS TO A LEGACY

That unselfishness is evident on the court. Whether it’s making an extra pass or being a part of a stifling team defense that enabled the Hilltoppers to race out to an 18-2 lead in the title game before some fans even sat down, this squad of talented, athletic, and well-coached individuals plays as a team. A championship team.

“Defense is something we love to do together,” said Newell. “It creates a lot of turnovers.”

And that leads to offense. In the championship game, Anaya Peoples led the Hilltoppers with 19 points. Junior Capria Brown added 17, Newell 16, and Gouard 10.

But their unselfishness shows off the court as well.

“This team does a lot of service work for our school, and for our community,” said Father Schmitt.

“We are more than basketball players,” said Anaya Peoples. “We love hanging out with the little kids around school. We love bringing our community together and basketball is just a tool to do that.

“We want to say thank you to our community and that we love them,” she added.

The community echoed that love. A large contingent cheered them through the state tournament, and then more turned out on a rainy, chilly night after the title win to welcome them home to Danville.

“It was very touching to see all the people, cheering and waving” as the team bus toured the town, said Newell.

Coach Peoples praised the team’s hard work and sacrifice, but used a different word to sum up this squad. 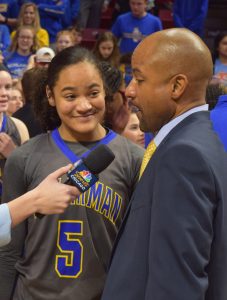 “Our young ladies had opportunities to play at different high schools,” he said. “That they maintained their course, their loyalty, and their commitment to our Schlarman community means so much to me.”

Father Schmitt said there is some talk that this group of Hilltoppers might be the best Class 1A girls team in Illinois High School Association history, but even that might be too limiting. In fact, a team motto this year was “Any ‘A’ . . . Any Team . . . Anywhere.”

Their spirit and work ethic are inspirational, even to the school chaplain.

“I have gotten the chance to be with them in the classroom, and in the locker room, and on the court,” said Father Schmitt. “Through their witness, I’m always inspired to want to work hard, and seek to become the best person I can be. Their attitude and demeanor is contagious. They are special.”

“We wanted to leave a legacy not only for Schlarman and Danville but for girls,” said Newell. “We want girls sports to be talked about more. We have a great program.”

And they have the record to back it up.

EDITOR’S NOTE: More photos from the championship game may be viewed in an album posted on The Catholic Post’s Facebook site.